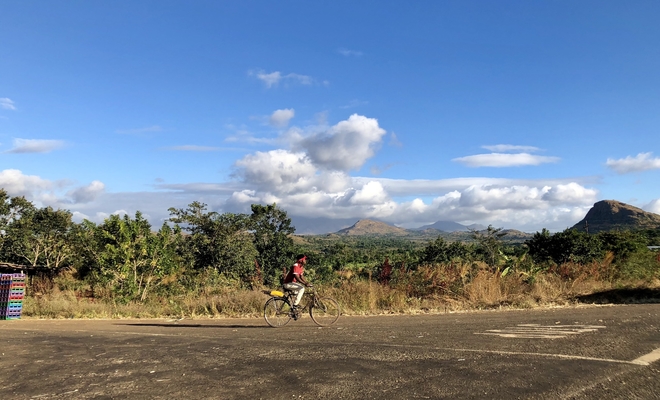 The road from Zomba to Blantyre, Malawi.

I will shortly return to Malawi on one of my 4-5 visits to the country every year. Since 2006, I have visited the country on countless occasions to conduct research and teach at Chancellor College – where we have jointly developed a Masters programme in Public Administration and Management for Malawian civil servants. Due to my longstanding interest in Malawi, I am often asked in various academic and policymaking circles why Malawi is lagging so far behind its neighbours in terms of development and poverty reduction. Indeed, many Western analysts have even begun to propagate the idea that Malawi is unique. For example, I have heard colleagues state: “There are developing countries, and then there is Malawi” implying a sense of hopelessness that characterises the country’s development trajectory. All of this points to a paradox: Despite peace, political stability and consistent support for democracy, a majority of the country’s 17 million people has not witnessed radical improvement in their living standards. And the country does not perform well in international rankings such as those on human development and perceptions of corruption.

In responding to questions on Malawi’s “underdevelopment” or “underachievement”, I usually begin by pointing out the numerous successes that the country has achieved despite many odds. Between 2000 and 2015, Malawi enjoyed a mixed record in achieving the Millennium Development Goals (MDGs), but took important strides on MDG 4 (reduction of child mortality) and MDG 6 (combating HIV and Aids, malaria and other diseases). For example, the under-five mortality rates have improved from 189 in 2005 to 59.1 in 2016. Similarly, life expectancy has increased – while in 2005, the average life expectancy for Malawian women was 49 years, it was 63 years in 2016. And Malawian men can now on average expect to live for 58 years as compared to 47 years in 2005. One of the many reasons for this success has been an impressive reduction in HIV prevalence rates since antiretroviral therapy was scaled up in 2004. And according to UNAIDs, Malawi has been one of the biggest success stories in Sub-Saharan Africa, having reportedly saved over 260,000 lives since 2004 and achieved a 67 per cent reduction in the number of children acquiring HIV. Similar gains have also been achieved in the field of malaria-related deaths and maternal health.

My staple answer in trying to explain the country’s numerous under-achievements include highlighting a variety of factors: administrative failure to ensure successful delivery of public services; adverse impacts of climate disruption on the country’s mainly agriculture-based economy; high dependence on cash crops such as tobacco – the biggest foreign exchange earner; inadequate infrastructural development; limited opportunities in political, economic and social domains for women; high levels of youth unemployment; historical neglect of the agricultural sector; unusually high level of dependence on foreign aid, which on occasion limits the government’s policy space; pervasive political and administrative corruption; rapidly growing population (currently estimated to be over 17 million) that is exacerbating vulnerability to poverty; and lack of transformational leadership.

A major achievement that cannot be overlooked is the consistent support for democracy in Malawi since the adoption of a multi-party democratic system of governance in 1994 – a feature my colleagues and I explored in a recent book. My colleague Boniface Dulani argues in the book and in his other writings that Malawi’s experience shows that the relationship between democracy, governance and development is not as straight-forward as it is sometimes assumed. Although there have been some development gains in Malawi since 1994, such gains have been cancelled out by poor performance in many key areas of development. Thus, although democracy provides a basis for better governance and prospects for socio-economic development, democratic politics does not necessarily always foster or guarantee development. This is particularly the case when the desire to win the support of the electorate results in the adoption of populist policies that might hinder, rather than promote, development. Indeed, although the overarching policy goals of the various governments in Malawi since 1994 have been poverty alleviation, empirical evidence suggests that the impact of democracy on poverty reduction and socio-economic development has been negligible.

The future of development in Malawi

Over the years I have had the pleasure of interacting with Malawians from all walks of life. A well-informed Malawian colleague has long bemoaned the continued “lack of ownership in things we want to do”. Another observer of Malawian politics is of the view that “People are not convinced about our development pathway”. The most scathing criticism is, however, typically reserved for politicians, who are accused of lacking passion. As one social commentator told me, “When reading policy statements either at home or abroad, it appears that our leaders are reading the statement for the first time”. Another alleged that officials that represent the country in international forums “do not spend time in deliberations but are busy shopping”. Using the example of the SDGs, one political commentator noted at a recent SDG seminar we organised, “We are yet to be convinced that the SDGs are our goals as no policymakers have made noise about these ambitions”.

In response, political leaders accuse the large number of NGOs and activists operating in the country of not making a substantial impact on development outcomes. They allege that many NGO leaders use their organizations for personal goals rather than the wellbeing of citizens. In addition, incumbent leaders in Malawi, like in many parts of the world, also bemoan the politicization of development and the lack of praise for their efforts to handle a struggling economy. Thus, the Malawian President recently observed: “Malawi would have developed long time ago if it was not for the tendency to politicise most institutions, government projects and development programmes”.

Many scholars, activists and leaders also routinely criticise the enormous influence that Western donors exercise on Malawi’s economy and politics, and how such “interference” limits policy space and prevents the political-administrative set-up from prioritising development as it sees fit. A common complaint is the lack of donor coordination (e.g. some donors support a joint financing model; while others prefer to fund projects directly as district level). Henry Kachaje, the Managing Director of Business Consult Africa, advises Malawians to “question the role of piecemeal aid and help”. Similarly, Dalitso Kubalasa, the head of the Malawi Economic Justice Network, is of the view that “aid should be a bonus, not the main source of financing”. And while aid from China has offered leaders more policy space, there are growing concerns that Chinese assistance alone is never going to be enough to fulfill the country's needs.

In support of the above views, many others claim that there is a huge gap between national plans (e.g. the Malawi Growth and Development Strategy) and donor priorities. And that the only way forward is for Malawi to generate additional resources on its own, and become less reliant on aid. But that is easier said than done, as several economists point to the country's low tax-base, inefficient institutions (including Malawi Revenue Authority) and the irregular supply of electricity that is stalling economic growth. Still others claim that public policymaking in the country is haphazard – that the government is more likely to agree to everything the donors want, without much protest. For example, three years since the SDGs entered the international development discourse, it remains unclear how they are linked to Malawi’s national framework. Many students of mine wonder whether their political leaders are genuinely interested in achieving results and whether the political rhetoric matches the reality. The general consensus, as one outgoing senior UN official put it, is that Malawi is “policy rich, but implementation poor” – it  agrees to all international rules and donor wishes but is unable to deliver such promises on the ground.

But not all blame their government for their misery. Some Malawians also point to the role of religion and the sense of fatalism that characterises the daily lives of many impoverished households. In the face of immense hardship many are said to adopt the view: “This is not my world, we are just passing by. We are simply waiting to die”. Such beliefs, according to some, leads to passivity and contributes to an overall sense of hopelessness. But then again, as a colleague of mine once observed, “If poverty is so deep, can we blame people who simply wish to be on their way to heaven?