The 2030 Agenda for sustainable development and the power of ambiguities

Is the concept of Sustainable Development a useful tool for global development? 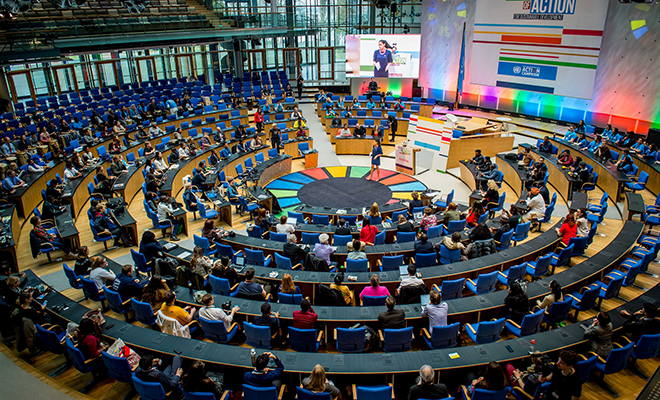 Sustainable development as an innovative idea for global development attracted considerable initial attention following its coinage by the World Commission on Environment and Development. In its 1987 report Our Common Future, the Commission provided a succinct definition that has been much-cited in subsequent academic and policy discussions: “development that meets the needs of the present without compromising the ability of future generations to meet their own needs”. The current attempt in the 2030 Agenda to closely link “sustainability” with “development” has similarly been much celebrated in business and policy circles as a means to stimulate a radical shift in world affairs. However, our concern is that the use of sustainable development in the current international discourse, and particularly in relation to the SDGs, is replete with ambiguities, and there is a risk that it can be misused for the preservation of current policies rather than being used as a lever for radical change. Indeed, the flexible use of the sustainable development concept potentially masks ideological differences and inconsistencies.

A closer reading of the 2030 Agenda reveals that it is both an expression of a promise and an obligation. The we in the Agenda promises “to end poverty and hunger, in all their forms and dimensions, and to ensure that all human beings can fulfil their potential in dignity and equality and in a healthy environment”. At the same time, the document states: “We have mapped the road to sustainable development; it will be for all of us to ensure that the journey is successful and its gains irreversible”. There is thus a distinction in the text between the we that promises and the we that is bound by the promise.

The text also makes it possible to take and place responsibility at the same time when it calls for the international community to: “recommit to broadening and strengthening the voice and participation of developing countries”. Strengthening a voice has a double connotation: on the one hand, it implies an emphasis on the other’s right to be heard. The act of strengthening voice thus involves a responsibility on the part of the receiver – to listen better. On the other hand, it also implies that the other must speak louder. In this sense, it is the responsibility of the sender to make herself heard. The term “participation” contains a similar ambiguity. To encourage someone’s participation implies a responsibility of someone else for facilitating participation. But it is also the participant’s own responsibility to participate, be active, and to make use of her/his freedom. Hence, although the 2030 Agenda appears to imply that both the rights and the responsibilities of “developing countries” will be strengthened as part of the 2030 Agenda, it is not clear how this is to occur. Indeed, the power inherent in language and concepts produces paradoxes related to inconsistencies and contradictions when it comes to taking and placing responsibility.

A key question that has dogged the SDGs since their inception relates to funding such an ambitious agenda in low-income countries. Three main sources of funding are typically identified: own funding by poor countries through taxation, foreign aid from developed countries, private sector finance. But there are growing concerns that many of the poorest countries will not be able to self-finance programs and that recent threats to aid from the Global North will stall efforts to advance the SDGs – thus making a stronger case for involvement of other actors, including the private sector.

However, despite replete with references of the “we”, the 2030 Agenda does not make a clear distinction of the responsibilities of various stakeholders. Embracing the complexity of the SDGs requires a clearer understanding of the role of national governments, international agencies and businesses. This is particularly urgent in low-income countries and conflict-prone “fragile states”, many of whom are confronted with the dilemmas and risks associated with coordinating the activities of numerous (and often competing) actors. Although there is considerable focus on the key role of national governments in implementing the SDGs, it is unclear to what extent many low-income countries will be able to generate adequate financial resources (e.g. through taxation), and thereafter coordinate and implement development programs aligned with their national interest. The question thus arises: Who will step in? Which part of the “we” will assume a greater responsibility to ensure implementation of the SDGs in such contexts?

The ambiguities in the 2030 Agenda have the power of undermining the legitimacy of the SDGs. These ambiguities appear to introduce a double-duty principle to the core understanding of sustainable development, which thus understood is about taking responsibility and placing responsibility; committing oneself to a promise and committing others to an obligation. Hence, the promise becomes everyone’s main business but no one’s major responsibility. The responsibility for fulfilling the promise is thus all-encompassing and yet fragmented. The risk is that the more the ambiguity, the easier it is to err in the navigation between our own duties and the duties we attribute to others.

This blog has previously been published on the What Works Blog.