Brazilian global exports of Halal-certified meat is world leading. Is it sustainable? 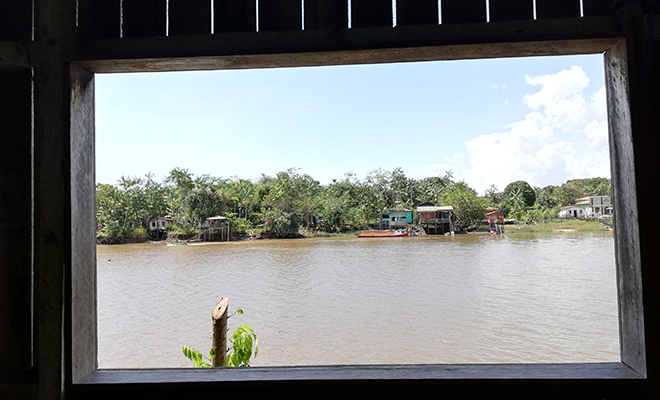 On October 6, 2015, Haidar, a cargo ship carrying 700 000 liters of oil and 5000 livestock from the leading meat processor Minerva Foods, tilted while anchored in a port close to Barcarena, a north-Brazilian Amazonian industrial city. The river was transformed into a bizarre and tragic scenery of spilled oil and decomposing animal corpses.

When one of us visited the area for fieldwork in 2019, people from Amazonian communities surrounding Barcarena retold vivid and traumatic memories of the event. Their accounts revolved around the terrible sight and smell of the floating cows, but also to the criminalization of some of the area's humble families who had sought to rescue cows to gain much-needed protein for their families.

Communities along the rivers in the area survive on fishing, and the only form of transportation is small wooden boats that crisscross the river network. In 2019, their river still smelled rotten, and according to the population, fishing possibilities have been heavily reduced, in addition to the end of small-scale tourism. The cow carcasses and the Haidar ship’s oil spill increased the ecological devastation in this part of the Amazon. Local inhabitants claim that hair loss and frequent skin infections are connected to the river’s contamination. “We used to have abundance”, people repeated, “Now, where can we go?”

The Haidar ship is owned by Sleiman Co & Sons and is commercially managed by Beirut-based Tamara Shipping. The ship was heading for Venezuela for a stopover before bringing the livestock to Lebanon. The exportation of fresh meat as a luxury product is a small, yet growing, niche of the immense Brazilian trade of Halal-certified meat. Brazil has in recent years turned into the world’s largest exporter of Halal-certified meat. In 2017 Brazil’s trade counted for 51, 9 % of the world’s total exports of Halal-meat. Halal-certified meat means Islamic principles for animal care and slaughtering are followed, making the meat Halal, which can be translated as permissible, for Muslims. In Brazil, 300 different companies have Halal-certification, illustrating the strategic importance of Halal-exports, despite that Brazil’s non-Halal meat exports are already world-leading, outpacing India in 2018.

Once it reached its final destination, the livestock on the Haidar was to be slaughtered and sold as Halal. Articles, photographs, and videos published by animal rights defenders document the harsh treatment that animals often endure on long overseas journeys. Islam is clear about treating animals with compassion and teaches zero-tolerance to all forms of animal abuse (Farouk, Pufpaff, and Amir, 2016). Rahman (2017) states the following:

If animals have been subjected to cruelty in transport and slaughter, or to general cruelty, meat from them is considered by Islam as impure and unlawful to eat (Makrooh). The flesh of animals killed by cruel methods (Al-Muthiah) is carrion (Al-Mujaththamah). Even if these animals have been slaughtered in the strictest Islamic manner, if cruelties were otherwise inflicted on them, their flesh is still forbidden (Haram) food.

Where is the sustainability?

The issues of deforestation and animal suffering in the meat industry are not unique to the Halal-trade. However, research suggests that, for many Muslims, Halal-certification is assumed to imply animal welfare and sustainability (Bonne & Verbeke, 2008). Leticia Filipi, a lawyer in a Brazilian NGO that promotes social development in the eastern Amazon refers to the Haidar disaster in a short documentary: “The animals died a terrible, unworthy, and cruel death. […] Their carcasses were left to pollute the river for years. Where is the sustainability? Where are the ethics?” The Brazilian world-leading meat processors– JBS, Marfig, and Minerva – all have Halal-certified subdivisions. These three meat giants are, moreover, heavily invested in the illegal deforestation of the Amazon. João Meirelles, the director of the NGO, mentions that each kilo of Brazilian meat from the Amazon consumes 15 tons of water and produces 7 kilos of carbon. Meirelles asks, “Do those people who buy 1 kg of meat … have any idea of the dimension of its impact? I don’t think so.”

We turned to theologically knowledgeable persons in Islam to explore this apparent dissonance.  ”Caring for nature is an Islamic act, and Muslims must not destroy nor overuse nature and its resources”, according to Mosque leader and Imam of the Islamic Community of Bosnia and Herzegovina in Oslo, Faruk Terzic. We met him over tea in his Corona-closed Mosque in central-eastern Oslo. “We must reconsider our ideas of progress and development”. Is it progress to eat more meat now, or to improve our health and ecosystems for the future?”, Terzic asks. We ask Terzic whether the deforestation of the Amazon may also be theologically questioned. According to Imam Terzic a possible view is that the responsibility for animal welfare extends to also taking care of their habitat. If deforestation leads to loss of habitat, it goes against Islamic principles.

Countries with a Muslim majority follow global trends of increased meat-protein consumption. Statistics show that “in 2018, the market revenue of global Halal-food amounted to approximately 715 trillion U.S. dollars and is forecasted to increase to 2.04 trillion dollars by 2027” (statista, 2019).” We asked Amina Selimovic, a researcher at the theological faculty at the University of Oslo, whether Halal and its connection to other Islamic values could contribute to the broader conversation on sustainability and consumption including outside Muslim communities. “This is a relevant topic”, she says. “Moderation and non-gluttony are religiously founded principles. However, current patterns of growth in Halal-brands are driven by a capitalist rather than sustainable or Islamic logic.”

As an example of the consequences of this trade for people in poor countries, Selimovic points to the situation in the Bosnian countryside, where there is an exodus of farmers whose meat production cannot compete with cheaper meat from Brazil. “It is similar to Fairtrade; it helps privileged people, who do not investigate the practice as long as the product is Halal-stamped. The Halal certification eases their conscience.” In a co-authored paper, Selimovic claims that the affluence of oil-rich Middle Eastern countries, in conjunction with the proliferation of Muslims in the diaspora, has seen several multinational corporations position themselves to capitalize on Halal-branding (Thomas, & Selimovic, 2015). The emergent Halal-industry, which promotes meat but also a growing diversity of non-food products, is promoted in yearly luxury Halal-summits in countries as Turkey, Malaysia, and the US attracting investors from the Middle East and beyond. Innovation, growth, finance, and certification are among the central topics that these summits’ programs promise to discuss. Last year’s Malaysia conference was titled Halal Community Driving the New World Economy, illustrating some of the high ambitions for growth that exist in the sector.

In many ways, Halal marketing seems to somehow follow the patterns of ‘green branding’ and ‘greenwashing’ of industries as growth-based solutions to climate change. In these strategies, green becomes a legitimizing power (Buseth, 2017) guaranteeing access to green financial mechanisms, often despite the environmental damage they produce. Conceptualizing international production of Halal meat as ‘Halal-washing’ can perhaps be just as useful for analyzing value and supply chains of Halal-branded meat in political ecology´s larger engagement with greenwashing. Doing so will allow for simultaneously recognizing the discrepancy between a theological-sustainable reading of Halal and current branding and understanding the particularities of supply and value chains and geopolitics of Halal ‘meatification’ (Jakobsen & Hansen, 2018).

The devastating fires in the Brazilian Amazon in 2019 and 2020 brought increased senses of urgency globally, given the decisive role the Amazon has in reducing climate change. For the Amazonian communities, green-branded bauxite mining by world-leading companies as Norsk Hydro and Alcoa, and the Halal-branded meat exports of companies as Minerva, are contributing to the same result. Local inhabitants witness the dissonance between on the one hand brand and green certificates and on the other their lived experience of dispossession of their common goods, and future life possibilities.