The dream of a terra nullius, a place imagined as outside of societal constraints, law, and history has existed since the middle ages. But romanticizing the notion of a natural frontier can have deadly consequences for indigenous people. 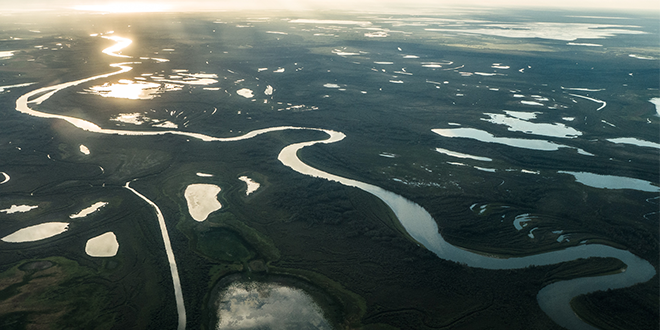 “It was the Wild West out there – only cowboys, it was crazy. There used to come prostitutes in the camps, and everyone was drinking and using lots of drugs. Once there was this guy who fell off his cat [a bulldozer] with a bottle of whiskey in his hand. My first job there when I was twenty, I just got kicked out of music school and I went, the job was six weeks straight, everyone worked six weeks straight, after four weeks we all were certified insane. It was at Rainbow Lake as far north as you can go in Alberta, a long piece of pipeline. […] the oil industry, you could do what you wanted out there, there was a freedom”

This is what Gavin, a white Edmonton local in his early thirties told me over a beer, when I asked him about his experiences working in the oil sands during my fieldwork in 2013 for my PhD research on oil sands extraction on Indigenous homeland in Northern Canada. The “old days” Gavin referred to were about ten to fifteen years ago, around 2000, early in the most recent oil boom that has taken place in Northern Alberta, Canada. Gavin also seemed to draw his experiences with the Canadian oil boom into a broader narrative, sustaining colonial forms of violence in the present: that of the frontier, and of Terra Nullius.

Who owns the land?

Places constructed as terra nullius (land owned by no one) are also seen as frontiers, and sometimes as wastelands. This colonial worldview is partly based on John Lock’s theories on property, where only land mixed with labour can become someone’s property, and only specific types of labour are counted as “proper”.

Frontiers in this sense are therefore waiting to be possessed, as they belong to no one. People already living there are seen as one with nature and as not using the land (properly). Northern Canada is a core example for a region that is imagined simultaneously as a wild and beautiful frontier and as a resource storeroom, a waste land that can be wastelanded, extracted, and polluted to fulfill “southern” needs for energy and minerals.

These seemingly contradictions of beautiful wilderness and a wasteland that can be extracted are more closely linked as it might look at first glance, as the former enables the later. To understand both reasons and consequences of this link, it is necessary not to only look at what a frontier is, but also what a frontier does.

Arctic regions especially are often presented as vast areas of powerful nature and never-ending forests and tundra that stretch beyond human imagination and are empty of people.

Nature documentaries, tourist brochures, and environmental organizations hardly acknowledge that the Arctic is also home to many different peoples. If these peoples are recognized and mentioned, they are romanticized as part of the Arctic ecosystem, naturalized in the background of the narrative of a wild and empty land.

This romanticizing is far from harmless, it is not only used as a tool for dispossession, it also animalises Indigenous people, painting men as dangerous and led by instincts, and women as possible prey and is again grounded in the colonial ideas of a terra nullius. The statistically overrepresentation of Indigenous men in prisons and of murdered and missing Indigenous women and girls shows the grim and -in some cases- even deadly consequences of this colonial imagination.

Frontiers are typically constructed as spaces where state sovereignty is still unstable and as realms that are characterized by an abundance of nature. This allows people and corporations that are drawn to imagined frontiers to act a certain way. Large scale destruction of land is justified with the argument that there is still plenty of wilderness left. Acts of violence or other behavior that otherwise would be seen as socially unacceptable are explained by the extraordinariness of frontiers, for example as comparing them to “the Wild West”.

However, this acting does not weaken state sovereignty, on the contrary, it strengthens it. State sovereignty gets both extended and maintained through frontiers. With the help of settlers, the Canadian state has attempted to transform the northern boreal forest into an agricultural and industrial landscape, an endeavor enabled by defining the region as frontier and terra nullius.

As northern frontiers are inside a nation state, these acts are not seen as invasions but as acts of civilizing the “wild”. Frontiers are therefore affective spaces rather than a geographical location. Their “extraordinariness” is used for unsustainable resource extraction, environmental destruction, sexual violence, and economic and social inequalities.

The Oil Sands Industry as Manifestation of Frontier Thought

Northern Alberta is a core example for how frontier imaginaries enable destruction and violence. Gavin worked in the oil sands industry, which is the most defining industry for the Province of Alberta. Oil sands are a naturally occurring mixture of sand, minerals, water, and bitumen. Bitumen is heavy and extremely viscous and does not resemble oil before it is refined. Oil sands extraction and the refining of a barrel of usable oil from bitumen translates into much higher deforestation, habitat destruction, toxic wastewater, and greenhouse gas emissions than conventional crude oil, which makes them into one of the world’s most controversial fossil fuels.

Some extraction methods are highly water and energy intensive, and the energy needed is often drawn from natural gas, which also ties the industry to the expansion of hydraulic fracking. These methods also result in chemical additives and steamed bitumen that get into the water tables. Environmental organizations, independent biologists, Indigenous nations, and other concerned locals have warned about the combination of deforestation, wetland destruction, water diversions, and persistent toxins and bioaccumulation in the area and its impact on ecosystems, health, and wildlife habitat for years.

There are concrete consequences for the people living in the region. Respiratory illnesses, skin reactions, and supposedly also the high cancer rates in several communities and some species are common issues for both human and non- population. Decreasing wildlife and eatable plants threatens food security as so-called “bush-food” is still an important supplement to expensive store-bought food for many families. Loss of access to or the destruction of historical and spiritual important places threaten land-based traditional activities and disrupt cultural and traditional knowledges transmissions to the next generations.

Besides environmental destruction, the oil sands industry brought along also severe social challenges. The influx of mostly male workers, rising living costs, and growing housing shortages lead to increasing socio-economic inequality, drug use, (gendered) violence and crime rates. Most sex workers Gavin referred to above were Indigenous women or women of colour. This aligned with the colonial view that saw Indigenous women as sexual objects. Violence against these women, who often struggled with addictions, and who in many cases had been forced into sex work, was common.

When I asked more, Gavin distanced himself from the men buying sexual services and condemned both the practice and the view on women that saw them as objects that were there to the pleasure of men. He was much aware of the violent structures that forced many of these women into sex work and both the violence and poverty most of them experienced. However, he still recounted their presence in the camps with nostalgic voice as a sign of freedom and enjoyable unruliness.

Gavin was not the only one who used the term Wild West referring to oil sands extraction dominated places. In a group conversation with both Indigenous and non-Indigenous women who worked and lived in the region, we entered the topic of sexual harassment and sexual violence, which each and every one of us had experienced to different extents.

“It’s like the Wild West around here”, one woman said. “I just let it go, I mean, there is so much of it (sexual harassment), it’s just like that, I never report it, it’s best to just leave it”.

The others agreed that it was not worth going through reporting when it was “just” sexual harassment. “It’s just what it is, it’s best to just keep away from situations you can avoid, and bear with it when you can’t”, another one said. They had internalized their powerlessness in the meeting with a hypermasculinized frontier culture. However, they reclaimed their agency through acts of solidarities towards each other in the form of emotional, financial, and practical support. In the affective space of a frontier, violence against women is normalized.

Opposing Frontiers: “Our Bodies are not Terra Nullius”

As I have shown, the concept of terra nullius is far from being an innocent nostalgic notion. It extends to include Indigenous bodies in addition to land as owned by no-one and therefore available to be taken and (ab)used and is still used for acts of dispossession and manifesting differences of power. Therefore, the concept of terra nullius enables ongoing colonial violence in form of environmental destruction and violence against Indigenous peoples.

However, it does not stand uncontested. Indigenous peoples are fighting back in many different ways, some by standing their ground as financial and political actors through court cases, investments, land claims, or acts of civil disobedience. Others resist to be erased and silenced by continuing land-based cultural, spiritual, and economic practices, by making their voices heard through research, poetry, music, or other means. But most of all: By the refusal to let their land and their bodies be defined as terra nullius rather than their home.