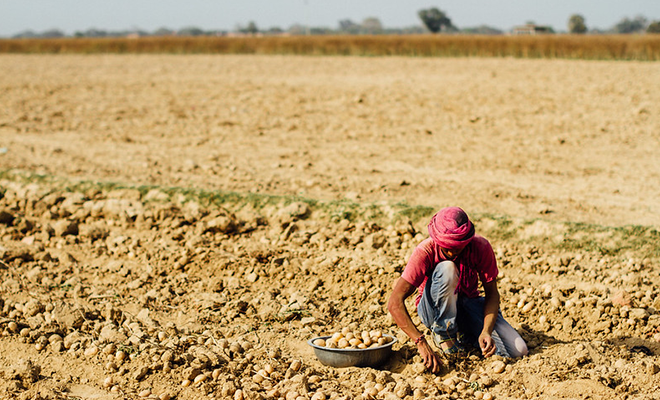 The liberalisation of Indian agriculture has long been the source of intense controversy. From the early days of the Indian republic, and especially since the Green Revolution in the 1960s, farmers became dependent on complex systems of state subsidies. This included minimum support prices for produce, the shielding off from international competition, state-regulated mechanisms for local trade in agricultural commodities and special provisions for those classified as ‘essential’ commodities. Indeed, the ‘contract’ between political rulers and commercially oriented farmers in the country depended significantly on the state delivering on these points.

While much of the Indian economy has been subject to neoliberal reform since the late 1980s, agriculture proved more difficult for reformers to deal with.

To avoid electoral pushbacks, governments have been very careful to avoid all-out reforms in the agrarian sector, maintaining aspects of the pre-liberalisation subsidy regimes and protectionism. Tellingly, India’s ambitious food security programme has repeatedly been singled out by the WTO as overly protectionist, leading to India being seen as something of a ‘troublemaker’.

Nevertheless, a gradual and piecemeal opening of India’s agrarian economy has taken place. Some states and regions have largely abolished the state provisions listed above. Moreover, Indian governments have reduced input subsidies, deregulated the seed sector for foreign direct investments, facilitated privatised banking interests within agriculture and, not least, shifted towards private sector research and development. The outcome is an agrarian economy that is well on its way towards liberalisation, even though reform-eager politicians routinely describe it as ‘unmodern’ and ‘inefficient’.

Under the present government of Narendra Modi, further steps have been taken to make Indian agriculture – like the rest of the economy – more export-oriented. In 2018, a federal agricultural export policy was formulated, aiming to double agricultural exports by 2022. It is therefore not particularly surprising to find that Modi presently places renewed emphasis on liberalising agriculture. This triggers new controversies, however, as Modi is homing in on the regulation of farmers’ access to commercial markets for food produce.

Three new Bills and their Impact

It is against this backdrop that the Indian parliament in September passed three bills that directly affect Indian agriculture. These are the Farmers’ Produce Trade and Commerce (Promotion and Facilitation) Bill, 2020; The Farmers (Empowerment and Protection) Agreement of Price Assurance and Farm Services Bill, 2020; and The Essential Commodities (Amendment) Bill, 2020. When the bills had been passed by parliament, Prime Minister Modi tweeted that this would “ensure a complete transformation of the agriculture sector as well as empower crores of farmers,” adding that the bills would “add impetus to the efforts to double income of farmers and ensure greater prosperity for them.” “We are here to serve our farmers”, he concluded.

Modi has for long sought to position himself as the champion of farmers’ interests, and the promise of doubling farmers’ income by 2022 has figured prominently in his political rhetoric (and government think tank reports) since 2016. But, real progress towards this end has been meagre.

To make matters worse, the impact of Covid-19 – which India has handled poorly – has wrecked the Indian economy in general, which contracted by 24 per cent in the second quarter of this year. The million-rupee question is, of course, whether the three new bills will make a difference for the better for India’s farmers.

As summarised by Vijay Jawandhiya and Ajay Dandekar in The Wire, the three bills are geared towards the further liberalisation of Indian agriculture. More specifically, they open up farming and farm produce at multiple points, at production, sale, pricing and storage. The Farmers’ Produce Trade and Commerce (Promotion and Facilitation) Bill seeks to completely open up the sale of produce outside the so-called Agricultural Produce Market Committees. These are marketing boards established by the government to ostensibly ‘protect’ farmers from exploitation by large retailers and to ensure that the farm to retail price spread is not excessively high. This system is also known as the mandi system, a key component of the pre-liberalisation regime in the agrarian economy.

With the passing of this bill, private players such as supermarket chains, agricultural businesses, and online grocers can now deal directly with the farmers.

The Farmers (Empowerment and Protection) Agreement on Price Assurance and Farm Services Bill outlines rules for contract farming, where farmers tailor their production to suit a specific buyer’s demand. Farmers can thus enter into agreements with buyers before production has started, and lock in prices for their produce before the harvest.

The Essential Commodities (Amendment) Bill removes certain kinds of produce from the list of essential commodities. Commodities on this list are subject to government control of the production, supply, and distribution of that commodity, and the government can also impose stock limits. With the passing of this bill, agricultural commodities such as onion, potato, cereal and pulses are now free of such governmental controls. This, in effect, allows private buyers to hoard such commodities for future sale.

There is much in these bills that is not entirely new to at least some Indian farmers. In roughly half of India’s states and Union territories, agricultural reforms that allow private markets have already been carried out. And, more than half already allow contract farming, and permit direct purchases of agricultural produce from the primary producer by bulk buyers and retailers and exporter. Farmers have often welcomed these changes in these states, although the actual outcomes have been far from straightforward.

Yet despite this, and the lofty promises of doubling farmers’ incomes, the new bills have been roundly criticised by angry and worried farmer groups and allied social organisations and individual social activists, who see them as unfair and exploitative.

While the first bill is likely to free farmers from the grip of exploitative middlemen who controlled the wholesale markets under the mandi system, their freedom to deal directly with private players is equally likely to lead to the collapse of the system of minimum support price assured through the mandi system.

This will leave individual farmers with no other option than to deal directly with a market that is likely to be dominated by larger private players in the years to come. This is difficult for farmers even in the best of times, but is further complicated by the fact that small and marginal farmers numerically dominate Indian agriculture, with little bargaining power. An average operational landholding is only just over 1 hectare, income levels for farming households are low by almost any standard, and indebtedness is high. In a country where agriculture employs hundreds of millions of people, leaving farmers’ fates to the vagaries of the market cannot be the only answer.

It should come as no surprise that the three new farm bills have provoked protests across large parts of rural India. The states of Punjab and Haryana – often referred to as India’s grain bowls – have seen particularly militant protests, but unrest has also erupted in western Uttar Pradesh and Karnataka. On 25 September, farmers’ organisations, trade unions, and oppositions organised a Bharat bandh – a national protest lockdown – and blocked national highways and railway lines.

Above all, it is the dismantling of the mandi system that has triggered the protests. “The private sector will give us a good price for one or two years, but what about after that?” one farmer asked an Al Jazeera journalist. “The government should guarantee the private sector will give us more than the government price.”  This has been a particularly pressing issue in Punjab, where prices for agricultural goods in the mandi system have tended to be quite high. As agriculture expert Himanshu has pointed out, while farmers certainly have their axes to grind with the existing mandi system, they still prefer it to the vagaries of the free market.

The current unrest echoes some of the discontent that shook India in 2017 and 2018, and which saw 35,000 farmers gathered in Delhi in late November 2018 to protest the deepening of India’s agrarian crisis under Narendra Modi’s regime.

Such farmers’ protests testify to the fact that, although Modi and the ruling Bharatiya Janata Party has expanded its rural vote base, the Indian countryside remains volatile – especially as Modi’s promises of growth and improvement fail to materialise.

However, it is too early and altogether uncertain whether they are a harbinger of serious political trouble for Modi. The 2018 protests coincided with a series of electoral setbacks at the state level for the BJP, but the 2019 general elections nonetheless left the party with a greater parliamentary majority than ever before. Moreover, it is important to consider the fact that farmers’ protests and the movements that propel them are not necessarily progressive forces in India’s political economy. On the contrary, many of the country’s farmers’ movements have been dominated by rich farmers, and their objectives have been shaped by the interests of these groups – which do not always dovetail with those of small and marginal farmers.

Despite the opposition to the new bills, Modi’s government has shown no signs of backtracking, insisting that they will bring newfound freedom to India’s farmers. While the actual as opposed to merely legal liberalisation of farming and farm produce is likely to proceed in a piecemeal and uneven manner, it is useful to recall that across the world the corporatisation of agriculture seldom improves farm incomes, much less doubles them.