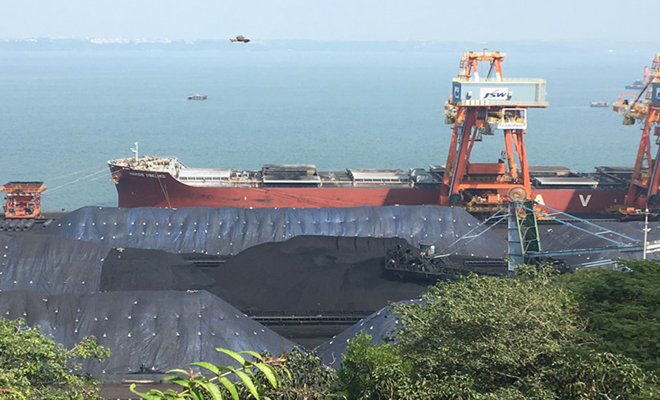 Goa is India’s smallest state. It is also increasingly becoming a coal hub as the state’s most important port at Mormugao seeks new revenue from the coal trade. The infrastructural, environmental and human consequences have been dramatic.

By the early 2000s, Goa’s infrastructure was broadly configured around three main economic activities. The coastal strip was dominated by an expansive tourism infrastructure; the central plateaus were home to industrial and transport infrastructure, the latter predominantly running in a North-South direction. And the sparsely populated hinterland contained extractive activities that connect to, and were dependent on, other infrastructural elements. Extraction has since long played an important role in the state’s economy, and until recently, Goa was India’s largest exporter of iron ore, with exports peaking at 54 million tonnes in 2011.

The mining, transport and port facilities of Goa’s extractive industries shaped the state’s infrastructural configuration in important ways. It claimed much land in its own right, but also incorporated riverine spaces since much of the ore was transported by barge from the mining areas via rivers to Mormugao port for export. When not transported by barge, the ore was brought via the road network by thousands of trucks. The evident environmental degradation associated with iron ore mining led to the emergence of a strong anti-mining movement that skilfully and successfully enlisted the language and institutions of law to fight its battles. Following the exposure of large-scale corruption in the mining industry in 2012, iron ore mining was initially banned and later capped at less than half the 2011 peak.

From Iron to Coal

The mining ban severely undermined the ability of Goa’s mining-related infrastructure to serve the needs of capital. With mining suspended, the associated infrastructure no longer underpinned the movement of raw materials, goods, and services. Mining sites were unproductive, barges and trucks sat idle, roads and rivers saw less traffic, and export activities and revenue at Mormugao port fell dramatically. The mining ban was thus a central component in a conjuncture where multiple factors coalesced to create enabling conditions for the emergence of a new coal geography in Goa: the loss of jobs and earnings; a dormant infrastructure; a large revenue crisis at Mormugao port; a new national Indian government with grand visions for new infrastructure projects; and private actors in search of coal. From this conjuncture emerged attempts to rework the state’s existing infrastructure to a new geography political economy centred on coal. The outcome that we sketch briefly below is a hybrid new coal geography, one that reconfigures relationships between public and private actors, old and new infrastructures, and coastal and inland coal activities.

Private companies operating at Mormugao port moved relatively quickly to reposition the port as a multi-commodity port with an important coal component. The port currently has five of its 11 berths leased out to private companies: two to the Jindal Group, one to the Adani Group, and two to Vedanta, one of the largest extractive industry companies in the world. All either use these berths, or plan to use them, for handling coal. In 2001, coal imports stood at only 2.7 MT. In 2011-12, it had risen to nearly 7 MT, and in 2015-16 to nearly 12 MT per year – an increase of more than 70 percent in four years. In contrast to the new national coal geography that we described in part one of this series, where thermal coal is crucial, coking coal still dominates at Mormugao port, and comprised 82 percent of total coal imports in 2011-12 and 67 percent in 2015-16. But, a transition is underway: during this interval, thermal coal imports more than tripled, while coking coal imports only grew by 37 percent.

The integration of Goa into India’s new coal geography was aligned with the big infrastructure programs of the Indian central government, namely Bharatmala (focused on roads and highways) and Sagarmala (focused on ‘port-led prosperity’). In a Sagarmala master plan for Mormugao port, finalised in 2016, the ambition to turn Mormugao into a coal hub was spelt out clearly through several new infrastructure projects. One was the capacity expansion of existing coal berths run by private actors to double their coal import capacity. The second was the dredging and expansion of the approach channel to enable much larger vessels (carrying more coal) to dock. The third was the redevelopment and expansion of additional berths for coal import by Vedanta. Various ‘optimistic scenarios’ set 50 MT of coal import per year as a target to be reached by 2030 or 2035. This would be achieved in part by enlisting 17 thermal power plants “in the pipeline in the hinterland” with a total capacity of more than 20,000 MW as new clients.

The coal geography that Mormugao connects to is global. As described by The Indian Express, the coal’s journey may begin in South Africa’s Richards Bay – one of the largest coal exporting facilities in the world – where it is loaded onto a vessel sailing under a Bahamas flag. The importer could well be Adani Global Private based in Singapore, importing coal into Goa and transporting it onwards to Karnataka state. Indeed, the destination for most of the coal is the coking coal-dependent steel factories in Karnataka, whose steel industry includes key actors at Mormugao port such as Jindal. Adani, another key actor in the Mormugao port reconfiguration, mainly imports coal for its clients in the steel industry in Karnataka. But, Adani is also India’s largest private thermal power producer with an installed capacity of 12,450 MW, most of which is coal based. This includes a 1,200 MW capacity coal based plant in Udupi in coastal Karnataka, which uses 100 percent imported coal as fuel, and is proposed for a significant expansion to 2,800 MW.

To enable the onwards movement of coal from Mormugao port, existing road, river, and rail infrastructure in Goa is being reassembled. Ambitious plans for a new road-river-rail corridor between Goa and Karnataka have been set in motion, including the four-laning of highways cutting through the ecologically sensitive Western Ghats hill range and into Karnataka. Other highways are also being widened, or linked in new ways to enable eastbound coal transport. Additionally, the railways are laying a second track also through the Western Ghats – a stretch that includes the steepest gradient anywhere on the Indian railway system – to connect to the steel city of Hospet. According to official figures, more than 34,000 tonnes of coal is transported by this rail route every day. The existing riverine infrastructure in Goa is also being harnessed to support the coal economy. Six river stretches have been nationalised and are to be “developed” via dredging and bank protection, concretised riverbanks and bunds, and new coal jetties. As is often the case in India, these different coal-related projects that are deeply integrated and only make economic and infrastructural sense when seen as a singular project, have officially been split up into very many small and isolated projects. This obscures the bigger infrastructural transformation underfoot, artificially minimises the “official” environmental impact of new projects, and makes it difficult for those incorporated into the new coal geography against their will to organise politically across sites and scales. In total, road and rail projects are likely to divert hundreds of hectares of protected and reserve forests, affecting nearly 100 villages.

The articulation of Goa’s pre-existing infrastructure with India’s new coal geography has had considerable consequences for public health and the environment. Since 1999, when the port first began handling coal, local people, particularly residents of the port city of Vasco da Gama have been filing petitions and appeals against pollution and violations of regulations at the port. In December 2018, the report “Closing the Enforcement Gap: Community-Led Groundtruthing of Environmental Violations in Mormugao, Goa” documented the multiple ways in which the port operates without adhering to pollution control regulations, resulting in layers of coal dust settling on fields and forests, damaging crop yields and biodiversity. Increased vehicular and train movement with heavy loads also threaten old heritage buildings, and the channel dredging and capacity expansion at Mormugao destroys the livelihoods of local fishing communities. There has thus been considerable popular opposition to the arrival of coal in Goa, which houses India’s perhaps most vibrant and resourceful civil society. Close to one third of Goa’s villages have passed resolutions opposing the movement of coal through their area. And, in May 2017, hundreds of Goans showed up at public hearings on coal-related projects. This led to the formation of a broad-based movement called Goa against Coal. Cases have also been filed in court, by among others the Goa Foundation that played a key role in earlier fight against iron ore mining. And, various state institutions have interfered on occasions, including the Goa State Pollution Control Board that ordered reduced coal handling, and even temporarily withdrew a company’s consent to operate, following breaches at Mormugao port.