Narendra Modi’s India shows us how authoritarian forms of statesmanship are highly compatible with neoliberal efforts to protect markets and global capitalism from "disruptive noise". 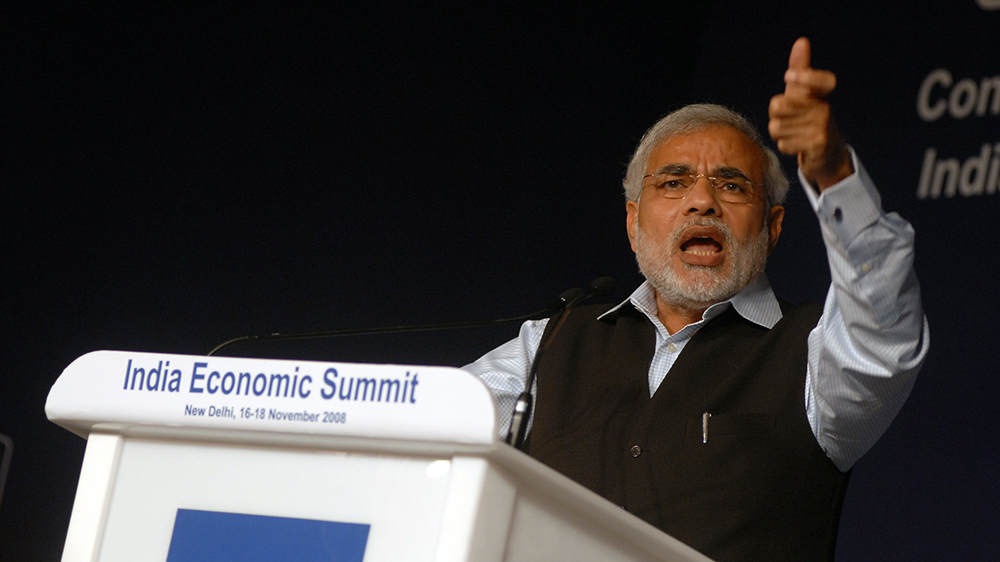 Neoliberalism is dead and buried. Instead of neoliberalism’s blind faith in the free market and hostility to the state, we now witness a wave of authoritarian, populist and right-wing regimes. Trump’s USA (RIP). Erdogan's Turkey. Bolsonaro’s Brazil. Modi’s India. The list goes on. Not only have these regimes replaced neoliberalism; we may even understand them as a consequence of the escalating inequality and unrest of failed neoliberalism.

At least that is how the new global political order is often presented. But as is the case with claims of political paradigm shifts in general, there is reason to be skeptical of such prophecies about the fall of neoliberalism and its imminent demise. Not least because they are all too often based on a misconception of the nature of neoliberalism.

Let us take a closer look at the last person on our list of prominent authoritarian populist "successors" to the neoliberal order: India's Prime Minister, Narendra Modi. He fronts a Hindu chauvinist regime led by the party Bharatiya Janata Party (BJP), and has been in power for close to seven years in what is nominally still considered "the world’s largest democracy". There is no doubt that Modi is a populist, regardless of how one defines the term. He has built his popularity first and foremost on social polarization by nurturing fault lines in society, pitting a Hindu majority against an ominous "other" – especially the country’s Muslim minorities. There is similarly little doubt that Modi is authoritarian. During his tenure as prime minister, India's civil society has been subjected to increasingly widespread policing and repression. Critics of the regime are bullied and harassed – online as well as in real life. This includes academics, intellectuals, university students, critical journalists, and human rights groups and environmental activists, to name but some. More generally, the state apparatus has variously been centralized around Modi or made subservient to his Hindu chauvinist allies. In the recently released “Democracy Report 2021” from the V-Dem Institute at the University of Gothenburg, India is now classified as an “electoral autocracy”. The report notes that when it comes to freedom of expression, the media, and civil society, India under Modi is now as autocratic as Pakistan – hardly a democratic lighthouse – and worse than neighboring Bangladesh.

Modi's authoritarian populist iron fist has hit parts of rural India hard in recent months and has received global media attention. Since November last year, Modi’s regime has faced massive peasant protests. In and around the capital Delhi, hundreds of thousands of farmers have protested the government's recent attempts at reforming agriculture. On Republic Day on January 26, unrest erupted as a section of the protesting farmers broke away from the main demonstration and stormed Delhi’s Red Fort. Subsequently, protesting farmers were beaten and abused; barricades were set up in the capital to contain the protestors; and the internet was closed. When journalists reported that a demonstrator had been killed by the police, the authorities responded by charging the journalists with sedition, a favoured government strategy used to silence critics. Leading protesters have similarly had criminal cases filed against them. It all assumed almost comical proportions when Indian authorities stated - in the wake of tweets supportive of the farmers from Greta Thunberg, Rihanna, and others - that the farmers’ protests in fact formed part of an "international conspiracy" to defame India and “threaten its unity”. Whatever one might think of Rihanna and Thunberg, they are hardly international terrorists. Rihanna’s tweet, in fact, merely shared a link to a CNN news story about the internet shutdown, accompanied by the rhetorical question “why aren’t we talking about this?!”

While the Modi government’s response to the farmers’ protest have undoubtedly followed the authoritarian populist mold, it is worth looking at what the agricultural reforms entailed that initiated the protests. As we wrote on Terra Nullius last year, the reforms revolve around three bills that Parliament passed into law last September. The laws abolish large parts of the state system that supports agricultural operations in India and pave the way for private actors - both Indian and multinational - in the production, sale, and marketing of agricultural products. In short, the reforms are distinctly neoliberal in nature insofar as they enable the entry of market forces, the flow of private capital, and the dismantling of state protection and regulation. In this regard, the reforms are part of a larger picture characterized by the growing power of the market in the Indian economy and society.

Modi’s economic policies are unsurprising. An important aspect of his popularity among the country’s business community is his promises of increased flow of capital and a "business friendly" outlook. Because of this, calling Modi a neoliberal has become somewhat of a cliché among Indian social scientists, political opponents, and critical civil society actors alike.

But hold on. The fact that critics call a politician "a neoliberal" does not necessarily mean much, other than that the term can function as a useful insult - a kind of negatively charged label that one can conveniently stick on things one doesn’t like. Such excessive and lackadaisical use of the term neoliberalism has meant that many social scientists have shied away from using the concept of neoliberalism altogether in recent years. This is unfortunate. But thankfully, there are others such as the human geographers Jamie Peck and Nik Theodore, who insist that the term is still useful - as long as it is used in a precise and limited way.

Neoliberalism, Peck and Theodore write, is not about (and in fact never has been about) abolishing the state. It rather revolves around using the state in specific ways to achieve certain goals. To put it concisely, neoliberalism is "an always mutating project of state-facilitated market rule". Such projects can take many different forms, depending on the context in which it is pursued. Hence, like the viral mutations that make media headlines these days, neoliberalism will come in many different forms. Importantly, the pronounced "hatred" of the state that we often intuitively associate with neoliberalism is, on this reading, first and foremost part of neoliberalism’s rhetorical self-presentation, not its political-economic practice. And rhetorical self-presentations should, as we know, never be taken at face value. Rather, as the historian Quinn Slobodian shows in his recent book Globalists: The End of Empire and the Birth of Neoliberalism (2018), neoliberalism has never revolved around a blind belief in the free market. On the contrary, neoliberalism has always focused on the painstaking work of transforming rather than dismantling states, laws, and other institutions to protect the market from so-called "disruptive" forces – such as democracy and politics.

As the example of Narendra Modi shows us, authoritarian forms of statesmanship are highly compatible with this kind of work to protect markets and global capitalism from "disruptive noise". To capture this, social scientists have now coined a new concept: authoritarian neoliberalism. The concept is more than mere semantic nitpickery. It helps us see that neoliberalism has mutated, as Peck and Theodore write, in a new direction during the period that followed the global financial crisis almost 15 years ago, characterized by generalized economic disorder. This new mutation has increasingly revolved around actively using the state to force through the necessary measures to protect a crisis-ridden capitalism, as the political economists Ian Bruff and Cemal Burak Tansel write. The marriage between neoliberalism and authoritarianism that we now see, they continue, may become increasingly characteristic of the political-economic world order. To appreciate this, we must abandon the notion that there is a necessary opposition between neoliberalism and authoritarianism. On this reading, Modi represents no farewell to neoliberalism. He is rather the ideal representative of contemporary neoliberalism – and perhaps even the harbinger of its future incarnation.

Jostein Jakobsen
Researcher, Center for Development and the Environment (SUM), University of Oslo