In 1864, a new cookbook triggered a heated debate in Norwegian media on the topic of porridge, how to cook it, and the authority of scientific knowledge. Although we live in different times, we face similar challenges today. 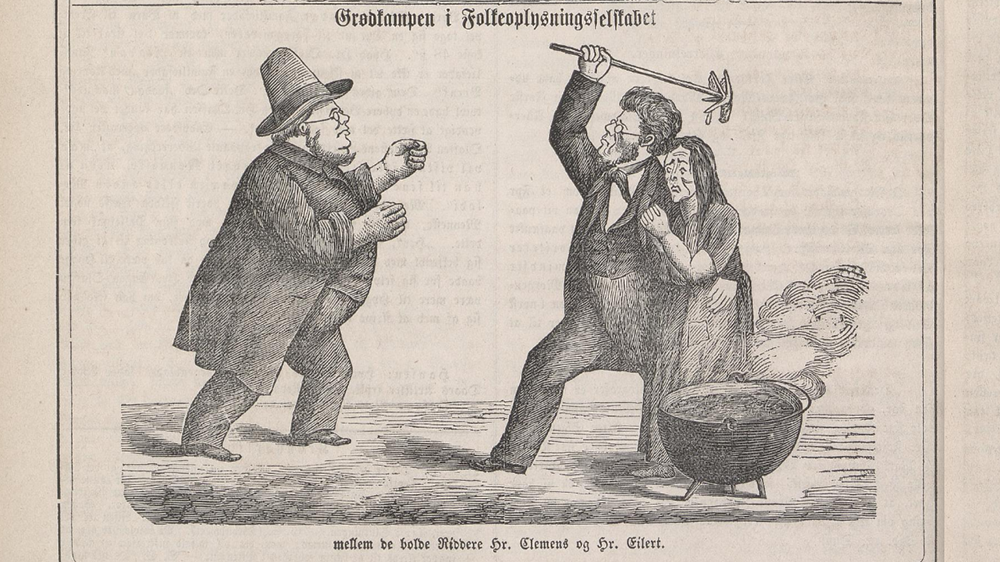 The porridge feud illustrated in Vikingen, 1865. Screenshot from The National Library of Norway.

Going back to the past to think about the future

In 1864, the mysterious Clemens Bonifacius authored the cookbook Fornuftig Madstel (Sensible Cookery), triggering a heated debate in Norwegian media on the topic of porridge, how to cook it, and the authority of scientific knowledge. The book presented instructive tips and advice for Norwegian women based on economics and modern science. In the foreword of the first edition of his book, Clemens Bonifacius, later revealed to be Peter Christen Asbjørnsen, criticized the custom of adding additional flour to the porridge after it was finished cooking. The author believed that the body could not digest flour that had not been heat-treated and argued that this traditional way of cooking porridge diminished the nutritional value of the grain itself, thus wasting thousands of kroner in grain (Nilsen 2019). The book reflected the ideals of enlightenment that were paramount to the educated urban population and were perceived to conflict with traditional customs. The author intended, most likely, to educate the rural Norwegian population, in hopes of improving their economic condition and diets.

The book was generally very well received among the educated urban men who voiced their opinions in public domain. These men were generally enthusiastic about scientific progress. They also, very likely, had little experience in cooking porridge. Those who did have such experience, and were being publicly ridiculed for their performance, were the women of rural Norway. These women did not have access to public debate. To their defense came Eilert Sundt. He was doubtful of the science behind Bonifacius’ claim, because he trusted the accumulated knowledge and experience of generations of rural Norwegian women. Additionally, he rejected the way the values of modernity and scientific progress were being pushed from the educated urban elite upon rural communities, disregarding and disrespecting their traditions and experience (Sundt 1864). He was met with massive criticism for rejecting good science and hindering scientific progress (Nilsen 2019).

It was also an expression of the struggle between rural and urban imaginaries, ways of life, and social classes.

Despite the fact that a public debate about the best way to cook porridge might be humorous nowadays, the concerns that fueled the Norwegian porridge feud remain as relevant today as they were a century ago. Food is a fundamental requirement for life, but it is “more than just “stuff we eat” (Long 2015). Food is central to our sense of identity (Fischler 1988) and mediates who we are -and aspire to be- as individuals, communities, and nations. Thus, food and cooking become a contested arena that contains “national and religious claims, class and ethnic preferences, racial and gender distinctiveness” (Ray 2013: 163). The relationship between food and identity is evident in this case. The Norwegian porridge feud responded to the construction of a national cuisine that included preferred/rejected dishes and food practices. It was also an expression of the struggle between rural and urban imaginaries, ways of life, and social classes.

A soup war between Russia and Ukraine

Nowadays, food and cooking is still a contested arena. They are used in the (re) construction of group and national identities, which involves the assertion of oneness and otherness, as well as group hierarchy (Fischler 1988). For instance, recently, a soup war between Russia and Ukraine broke out in social media when the Russian’s Ministry of Foreign Affairs tweeted:

A timeless classic! #Borsch is one of Russia's most famous & beloved #dishes & a symbol of traditional cuisine🥣🥔🥕🌶🥄😍😋
"There's a theory that the name "borsch" originated from the Russian borschevik (hogweed), which in ancient Rus was used to make soups."#Delicious #yummy pic.twitter.com/KjAKRkEsOS

This claim sparked outrage among Ukrainians and even the Ukrainian government, who consider borsch a traditional Ukraine dish (“Ukraine holds Borsch”, 2021). For many, the borsch dispute responds to “much larger trend of Russia’s historical oppression of Ukrainian language, politics, and, above all, independence” (Evans 2019).

The power of food culture

In a globalized world, states have also used the concept of "traditional food" to resist culturally homogenizing trends (Murcott 2019).

Studying gastronationalism in the European Union, Michaela DeSoucey (2010) concluded that the EU label of "traditional food products" enshrined in the Common Agricultural Policy serves not only to protect material interests, but also to assert the national distinctiveness of European countries in the face of the uniformizing effects of multi-country governance. On the other side of the globe, contemporary Peru, as described by Matta and Garcia (2019), has used the concept of  “national cuisine” as a vehicle for racial reconciliation, national unity, and renewed sovereignty in the aftermath of decades of political violence that eroded the idea of a national project.

The Norwegian porridge feud also questions the linkages between food and culture. The practices, attitudes and beliefs surrounding food are usually invisible, although they are all-pervasive. Food cultures inform what products are grown, distributed and sold; as well as, how they are prepared and consumed on a daily basis. Thus, culture plays a key role in the configuration of food systems at local, national, and global level. In the Norwegian porridge feud, behind changing food practices was a criticism of a rural food system thought to be inefficient, wasteful and irrational. The categories of rational/irrational and modern/traditional were used to suppress some food practices and knowledge while imposing others. The prevalence of modern and rational practices justifies the current food system. One that has created a world where hunger and obesity coexist side by side, all at the expense of environmental degradation.

Counteracting the modern practices of the current food system

Since the 80’s civil society organizations have responded by pushing for a change in food systems, one far from corporate interests and closer to the needs of food consumers and food deprived. Organized resistance has been accompanied by individual opposition. In a postmodern world, food consumption and practices are no longer defined by social class, but they are created and sustained by self-identity (Warde 1997). Accordingly, millions of people around the world are criticizing and counteracting the hegemonic food system through private consumption practices. For instance, vegans campaign for a food system that is fair for non-human animals, people and the planet and do so, mainly, through individual food choices. Urban farmers, also, strive for self- sufficiency through the development of agricultural plots in urban areas. Through individual food practices, these groups mediate their identity and their stance within the food system.

Finally, the Norwegian porridge feud questions who are the legitimate actors in the public debate. The conflict had at its core the Norwegian urban cultural and scientific elite. Clemens Bonifacius represented ideals of modernity and progress, while Eilert Sundt defended tradition and the lived experience of generations of Norwegian farmers. The voices of the rural Norwegian women were mediated through the voice of urban men. Nowadays, the voices of those who suffer the most pervasive effects of the current food systems are also silenced. For instance, in 2019, the World Economic Forum and UN signed a strategic partnership framework “to accelerate the implementation of the 2030 Agenda for Sustainable Development''.

The new Strategic Partnership Framework between the United Nations and the World Economic Forum is a milestone in enhancing public private cooperation on key areas: climate change, health and education to gender equality and financing for sustainable development @antonioguterres pic.twitter.com/3zJOAfjazW

Tweet by Børge Brende, President of the World Economic Forum.

This agreement has been criticized by civil society and indigenous peoples because it gives undue corporate influence in the preparation of the Food summit 2021, to the detriment of local food producers and consumers.

In conclusion, the Norwegian porridge feud, beyond being an anecdotal case, allows us to see the power of food cultures in the construction of national and individual identities, as well as make evident the continuing disregard in the public debate of women, rural peasants and food consumers. Different times, same challenges.

Sundt, Eilert (1864) in ''Folkevennen''. Kristiania: Cammermeyer. From the collection of Nationalbiblioteket