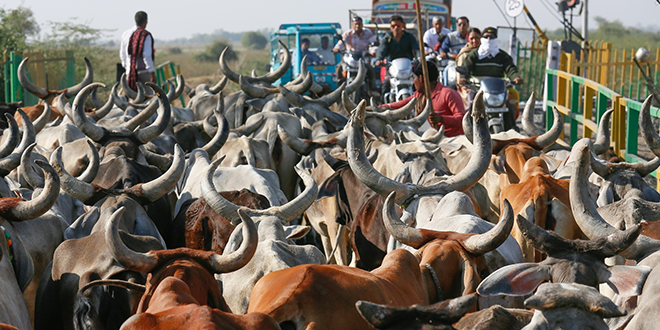 The dramatic increase in consumption of meat—both the human population and global per capita meat consumption doubled between the 1960s and the 2010s—is central to vast rural transformations across the world. Drawing on geographer Tony Weis, the ‘meatification’ of human diets foregrounds the dramatic rise in industrial-scale rearing, killing and eating of animals as intrinsically capitalist processes. Increasingly, meatification takes the form of what Weis calls ‘the industrial grain-oilseed-livestock complex’, profoundly changing agrarian practices to accord with the pursuit of profit. How does this ‘complex’ work in different parts of the world?

The industrial grain-oilseed-livestock complex involves economies of scale, integration in vertical value chains and, more broadly, commodity and trade flows. It also involves changing cropping patterns and demands for land. Indeed, as much as a third of the planet’s croplands are used for feed production for livestock. Altering patterns of agriculture, farmers tune in to new markets, sometimes leading to the transition from growing plants for food into growing mere ‘inputs’ that farmers do not eat, nor care for in the same way as their traditional crops. These ‘inputs’, instead, feed animals elsewhere—within factory farm systems that mushroom over rural, rurban, and urban space.

In some cases, the industrial grain-oilseed-livestock complex expands by what can be called “meat grabbing,” appropriating land not only for animal pasture but for the wider processes that go into the making of so-called “industrial meat production”.

The latter, of course, is quite a speciesist euphemism for large-scale killings of sentient beings. Meatification, in other words, entails dramatic and irreducibly interspecies rural transformations.

The notion of an industrial grain-oilseed-livestock complex identifies interwoven, multiscalar processes. Not only do these involve land, animals, farmers and factory farm technologies, but also agribusinesses and states. Meatification has geopolitical implications. Over the last years, scholars have highlighted several aspects of these processes. We have come to understand the dynamics of intercontinental relations between China and Latin America through the flow of commodities such as soybean, linked to the massive upscaling of factory farming in the Chinese pork sector.

This focus on China is very much warranted, given the astounding rate of meatification in the country. Yet, the “China factor” may overshadow other aspects of meatification in Asia, where several other countries are also witnessing rapid meatification and concomitant rural transformations towards the industrial grain-oilseed-livestock complex. Emerging geographies of Asian meatification remain to be mapped, analyzed and theorized.

In a recent article published in Globalizations, we contribute to this endeavor. Focusing on Asian geographies, particularly on Southeast Asia, as well as relations between Southeast Asia and India, we unpack important trends and dynamics of the political economy of meat in the region.

Meatification is a geographically highly uneven process, also within Asia. While some countries, such as South Korea, China, and Vietnam, have seen dramatic increase in per capita meat consumption, others, and most notably India, have hardly seen any increase.

Yet, India has emerged as a significant meat producer, especially of beef, although this fact tends to be under-communicated in a political atmosphere where cow meat in particular is increasingly controversial.

In the article, we argue that the escalating levels of meat consumption and production in Asia both drive and is driven by an emerging ‘Asian meat complex’. This complex, which we see as an Asian articulation of Weis’ ‘industrial-grain-oilseed-livestock complex’, takes form through changing diets, new trade flows and cropping patterns. Meat is increasingly traded intra- and inter-regionally. Furthermore, while much of the meat consumed in Southeast Asia is produced in the region, regional meat production has become highly dependent on imported ingredients for animal feed, in turn leading to new flows of crops, both within Asia and between Asia and Latin America. To a significant extent driven by regional capital with rising agribusiness companies, we understand this complex as an empirical manifestation of an increasingly multipolar global food regime.

The patterns of meatification explored in our article point to complex rural transformations in Asia in need of further research. This includes the ways cropping patterns change towards the expansion of the industrial grain-oilseed-livestock complex, including key crops like maize and soybean. It includes, moreover, the advance of factory farms across various landscapes—which we suggest constitutes a major subject for in depth research. The poultry sector appears an interesting area for further field based studies, known as the most industrialized sector in many Asian countries.

Geographies of meatification are not merely questions of production and commodity flows. They are also driven by consumption, and by the changing geographies and political economies of urban everyday food practices. In Asia, this means that rural transformations surrounding the industrial grain-oilseed-livestock complex are tied to processes of urbanization, middle-class lifestyles, eating habits and multifaceted changes to infrastructures of food provisioning. Meatification, in other words, is a powerful prism for studying rural-urban interconnections in Asia and beyond.