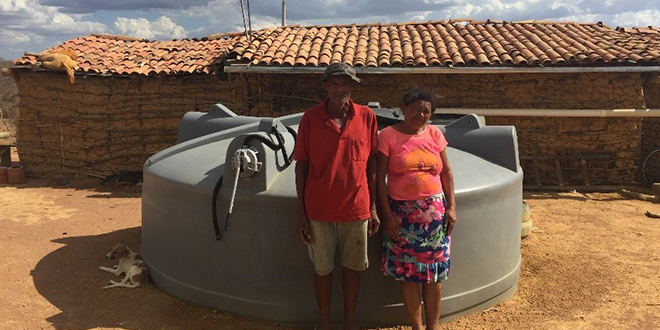 A couple with its plastic cistern in the municipality of Geminiano – Piauí. Photo: Yuri Kasahara

Rural areas in developing countries are often seen as a propitious environment for political clientelism. The semiarid region of Brazilian northeast, in particular, has been an archetypical case. High land concentration, poverty, and regular periods of extreme drought created perfect conditions for the dependency of rural populations on the good favors of local elites. While many have migrated out of the region to the coast searching for a better life in past decades, the region is still home to almost 28 million people. For those who stayed, their votes are one of the most valuable goods. During election periods, incumbent politicians would condition water supply or food aid on getting votes from more vulnerable populations. Exchanging votes for accessing a well in a private property or receiving a food basket during long drought periods have thus been seen as a common survival strategy and an image consolidated in Brazilian popular imagination and explored by the media and NGOs in every electoral cycle.

Despite the suffering rural populations living in the Brazilian semiarid region still experience with drought periods, conditions have improved considerably in the last 15 years. Cash-transfer federal programs such as Bolsa-Família, crop-insurance schemes, and distribution of cisterns to collect rain water have increased the resilience of rural populations and reduced the leverage of local politicians over the distribution of benefits. A clear example is the most recent drought cycle between 2013 and 2016 - one of the most severe in recent decades. Contrary to previous periods, there were no registered cases of famine or groups of starving people ransacking stores. Neither occurred huge flows of migrants from the region to big cities in the coast. As a local farmer said bluntly to me during one fieldwork trip: “This drought killed a lot of animals, but not people.” As individuals become more resilient, does clientelism end or does it adapt to new circumstances?  While access to water remains a problem, it is a less salient one.

Breaking the curse: the politics of  drought

In the project “Breaking the curse? The politics of drought in the Brazilian northeast”, our team tried to address these questions by conducting two parallel surveys in 90 small and medium sized municipalities across the semiarid region during October and November 2019. The first one interviewed 3,600 households, the second survey was based on 360 interviews with local politicians and administrators.

Not surprisingly, in both surveys respondents said that the lack of water supply and sewage was the main problem experienced in the municipality – 36.5% of respondents in the household survey and 45% in the elite survey. However, despite being a main concern, only 20% of the households said that they spend regularly a lot of time or money to obtain water.

This number largely reflects general improvements in water supply and storage in rural areas. Since the early 2000s, the expansion of piped water and installation of cisterns reduced the vulnerability of rural populations. When asked about the main drinking water source, only 15% of households had sources outside their properties. The importance of cisterns in creating a water storage infra-structure to rural populations can also be seen in the fact that in the absence of rain, households pay for water trucks to fill them with water – either alone or sharing the cost with neighbors.

If water seems to be a less pressing issue, the surveys revealed a new source of vulnerability experienced by rural populations: health care. In the household survey, we asked directly if respondents had asked for help from a public official during the last year and what type of problem they wanted to solve. For those who asked for help, 55% requested support for a healthcare-related issue. Transportation to a hospital in another municipality or help to get an appointment were the most common requests. These results are corroborated by the elite survey. When asked what was the main request from people in their municipality, 58% of politicians and administrators listed healthcare-related issues as the most common demands.

Although primary care has also improved considerably in the region – as illustrated by the sharp decreases in infant mortality – public health infrastructure is still deficient. Complex procedures and exams, acute emergencies, or specialists are hard to find in small rural municipalities.

For local governments and politicians, the provision of these services entails more complex strategies. Some try to rely on their personal contact network to fulfill the requests of citizens, such as getting patients into private hospitals or clinics, while others have invested in an infrastructure of services. In many municipalities, organized transportation services for public hospitals in other cities – except for ambulances in the case of emergencies – are provided, as well as housing for longer trips.  In the context of small municipalities, the management of healthcare resources by local authorities can be done in a discretionary way to favor political supporters. Politicians can  move clients to the top of waiting lists for health services or prioritize supporters in the distribution of medication in public clinics. In a more straightforward way, candidates can simply try to buy votes by offering free medication or doctor appointments.

Looking at the bright side, the development of a “healthcare clientelism” could be seen as the result of a real improvement in living conditions of rural populations in the Brazilian semiarid. As immediate needs are taken care of, such as water and food, it is to be expected that other ones will emerge. Another evidence that clientelistic machines might be struggling to continue their firm grip on rural populations is the steady reduction of reelection rates for mayors in the semiarid zone. Following the regional trend of more competitive elections, the reelection rate of mayors fell from 71% in 2008 to 48% in 2016. It seems that more resilient voters are capable of making better choices and punish politicians.

On the other hand, future prospects of a rapidly aging population in this region will most likely make healthcare an even more pressing issue. Certainly, traditional politicians will explore this and try to consolidate their control over political clienteles. How to improve healthcare services in rural areas seems to be the new challenge of the Brazilian semiarid region to empower their inhabitants against traditional elites.