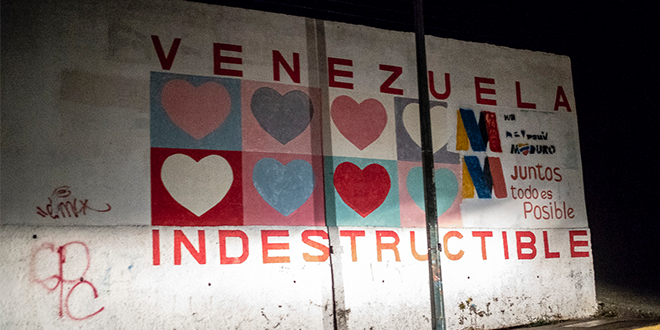 It was the weekend, and Maracay was desolate. There were no cars on the streets and barely any public transit.

I had the help of a cousin who offered to drive me to visit family. I was looking forward to a meal my mother organized at my aunt's place, in a poor barrio in the outskirts of Maracay. She was planning to cook her signature arroz con pollo (chicken with rice), with ingredients she had carefully collected for several days.

If she was cooking, the cooking gas ran out. She lamented that this was going to affect the recipe, but luckily she had a little dilapidated electric stove that was falling apart but kept on working.

My aunt pointed out she might have to wait for several weeks or months until the gas cylinders were distributed again by PDVSA-Gas— the state-owned enterprise in change of selling cooking gas. It was an emotional afternoon catching up with family. I shared my stories about living in Norway with my relatives, while I learned about my cousins' experiences via WhatsApp messages that had left to Chile, Peru and the US.

During that weekend, I was never able to use a taxi or bus, and remained dependent on my cousin's generosity. It was almost impossible to move around, gasoline was scarce, cars had been broken down and drivers were unable to make repairs. Many kept their battered cars on hold for emergencies. Unlike the situation in Caracas, where you could still move around, Maracay was a logistical nightmare.

Despite working on Venezuela for years and doing research on energy-related issues, I was still shocked to see how energy-deprived the country was, and how unequally that deprivation was “distributed” between capital and other cities and towns. Throughout my fieldwork, I witnessed the paradox of increasing energy deprivation in a country with abundant underground hydrocarbon reserves. This deprivation has become more widespread, demonstrating the limits of a development model reliant on natural resource extraction that is common in the region but which has taken on particular features in Venezuela.

The perils of extractive development

A few weeks ago, right-wing Brazilian President Jair Bolsonaro stated in his speech before the United Nations General Assembly that above the need to protect the Amazon was the principle of sovereignty. He went on to stress that northern governments and NGOs hold colonizing beliefs that seek to keep indigenous peoples in a distant past: “Unfortunately, some people both inside and outside Brazil, supported by NGOs, have stubbornly insisted on treating and keeping our Indians [sic ] as if they are real cavemen. ”He went on to say that:“ The indigenous people do not want to be poor, large landholders sitting on rich lands… especially sitting on the world's richest lands. ”

It would be a mistake to assume that Bolsonaro, a far-right populist, is alone in his claim over sovereignty and his Eurocentric civilizing mission of indigenous peoples. Just over a decade ago, then President of Peru, Alan Garcia battled to make indigenous lands of the Peruvian Amazon subject to exploitation. He questioned the attitude of indigenous communities who imposed what he called the “ dog in the manger ” syndrome : holding others captive by one's own set of principles. For García, indigenous resistance to extractive projects meant keeping the entire nation's development captive. A similar attitude was present in the left-leaning government of Rafael Correa in neighboring Ecuador who supported open-pit mining and expanded oil extraction in the Amazon. He insisted that Ecuadorians should not be “beggars sitting on a sack of gold”.

These notions of development and sovereignty have remained remarkably resilient across South America. The core of their claims is shared across political ideologies.

Underlying these claims is an assumption that states truly represent the national interest. Part of this interest presupposes that extraction is necessary. Local resistance to resource extraction is seen as an obstacle to national development.

Despite disagreements on how revenues are distributed, there is a remarkable regional consensus around extractivism, in part thanks to redistributive mechanisms created by state authorities to rally constituencies around resource extraction.

Beyond the regional trends, Venezuela has been both a paradigmatic and an outlier case. More than any other country, its revenues depend on the extraction and trade of primary commodities. In Venezuela, a true “petro-state”, there is a widespread consensus on the desire to use resource extraction to improve the lives of all.

But the country is an outlier as well. More than Bolivia or Ecuador, other socialist experiments in the region, the political leadership advanced mechanisms to appropriate underground rent to punish dissent and stay in power. It undermines institutional checks on power and ultimately puts the capacity of the hydrocarbon industry at risk, which largely explains the paradox of an impoverished society, living on top of an abundant subsoil. In the context of reduced revenue and increasing pressure to alternate power, the political elite has decided instead to expand the extractive frontier through violent enclosure and radical dispossession.in mining territories. Even more so, forms of environmental degradation have become more frequent as the country's crisis ensues.

The “benefits” (wealth redistribution and social policies) of the extractive mode of development are hardly noticed by the Venezuelan people today. Venezuela is among the top 10 countries with the largest natural gas reserves , yet its production stagnated 7.7 billion cubic feet per day for years. Over a decade ago, in one of his grandeur shows, Venezuela's late President Hugo Chavez boasted about the country's natural gas potential and proposed building a regional pipeline, the Gran Gasoducto del Sur, to bring Venezuela's natural gas to Brazil, Argentina and the rest of the Southern Cone. Venezuela could not achieve the status of global energy superpower that its socialist leader once dreamed of but, moreover, it has deprived its people of energy resources.

This energy deprivation has dramatic consequences for the environment and sustainable livelihoods. While not as noticeable as the fires of the Amazon, it spreads a trend of rabid destruction in the face of the bankruptcy of extractive development.

Gas scarcity in Maracay as well as other cities of Venezuela has continued and intensified since my visit earlier this year. Finding a gas cylinder is increasingly difficult as the hydrocarbon industry collapses due to lack of investment, mismanagement and, more recently, due to US-imposed sanctions that limit access to credits and markets. Many have to pay over a month's worth of salary to get a 10 kg gas cylinder, inflated by the costs of lining up and accessing the right contacts for it. Many do not have that option, suffering from weeks without cooking fuel, which happens at the same time as electricity shortages.

Electric stoves are rarely a realistic alternative due to high costs, scarcity and the increasingly volatile electricity provision.

Some people in the poorest areas of the country have turned to cutting down forest trees to make improvised wood stoves. Maracay is one of those places. Media reports have shown increasing deforestation in the Henri Pittier national park, which borders the north of the city and extends to the neighboring state of Carabobo. The Henri Pittier Park was the first founded in Venezuela in 1937. Not only is it rich in biodiversity but it is also an important source of fresh water for communities along the Aragua state coast.

Increasing pollution, deforestation, risks of flood and lung-related diseases are among the consequences of these improvised practices. In addition, last February, a state council deputy from outside Maracay died trying to ignite her wood stove with gasoline.

Maracaibo, the country's second largest city, near the western border with Colombia, has been hit especially hard with electricity blackouts that last for days and even weeks. In addition, cooking fuel scarcity in Maracaibo is even greater than in the central region of the country and thus market-price gas cylinders are dollarized. A gas cylinder can cost anywhere from 15 to 50 US dollars depending on size. Local media reports demonstrate the increased burden on poorer Venezuelans who literally carry the weight of the crisis, walking long stretches with over 60 kilos of wood from forest trees back to their barrios.

The gradual collapse of Venezuela's petro-state translated into the informal privatization of scarce services, including energy and fuel. Those who can afford to pay for such services at market prices survive, while enriching the elite that has captured the state for private gain. Those who cannot afford such services rely on dangerous strategies that cause further environmental damage. Much like the cautionary tales of regional leaders from left and right, Venezuelans have become increasingly energy impoverished, living atop vast reservoirs of hydrocarbons.