After the outbreak of the coronavirus pandemic, Chinese authorities banned the trade and consumption of wild animals. Western media portrayed wet markets as the sources of dangerous viruses.

However, blaming wet markets for the outbreak of Covid-19 is a dangerous oversimplification, if not an example of orientalism.

Although important, closing them down would not be enough: deeper changes are needed. Instead, we should seriously consider how food in general and meat in particular is produced and traded in the world.

Meat consumption has increased globally during the last fifty years at an unprecedented pace, and most of this increase has happened among middle classes in so-called developing countries. Meat production depends, like most agricultural production, on the industrial assemblage of crops and livestock; changing consumption patterns articulate with industrial meat production and result in the increases we currently observe.

Meat production, however, has not increased equally for all animals. It has increased the most for animals that can be raised in factory-like conditions and whose fodder can be de-coupled from nearby nature, like chicken, pigs and cattle (see graph below). The industrial production of meat involving billions of cattle, chicken and pigs around the world also demands that fodder be produced in different places than where animal “production” takes place. 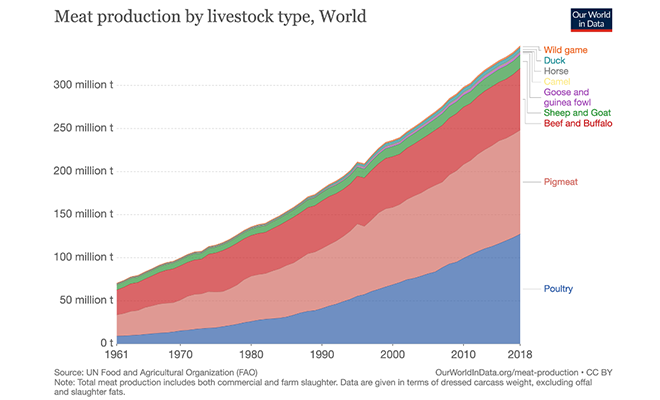 Millions of hectares of tropical forest have been cleared to give place to cattle or to fodder. Felling forests for producing soybean, palm oil, and livestock contributes to close to one third of global deforestation. The increasing global demand of shrimp in Europe, the USA and China has also resulted in the deforestation of fragile ecosystems, like mangroves and estuaries in South East Asia and Latin America. Furthermore, the convergence of various crises, climate, energy, food and financial, has resulted in the emergence of so-called "flex crops". Sugar cane, soybeans, corn and palm oil and their byproducts can be processed and traded to fill into different markets and demands, beyond food, stimulating the further expansion of these crops into forest areas.

Industrial meat production involves the concentration of millions of animals that are more or less genetically homogeneous in very small spaces.

For example, in the UK an “Intensive Poultry Unit” can house 40,000 poultry birds, each bird occupying the space equivalent to an A4 sheet.

Because these animals are more or less genetically homogeneous, they are more susceptible to the rapid spread of disease among them. This type of production therefore demands enormous amounts of antibiotics and results in the production of antibiotic-resistant bacteria, which currently kills thousands of people and pose serious threats to human health and health systems around the world.

Researchers have estimated that by 2030, as developing countries shift towards more intensive livestock production systems to meet rising demand for meat, more factory farms will be established in several places in the world. The largest increase in the use of antibiotics will come from countries like Myanmar, Indonesia, Nigeria, Peru and Vietnam. The consequences for human health of this increase in the use of antibiotics are unknown. Industrial meat production is also associated with horrifying labor conditions and exploitation of some of the most vulnerable people in our societies, working under violence regimes. Meat corporations have also been linked to murders and massacres in Brazil.

Covid-19 is a virus belonging to the coronavirus family. This is a family of viruses that can cause illnesses of widely different severities. The first registered severe illness caused by a coronavirus emerged in 2003 associated with the Severe Acute Respiratory Syndrom (SARS) epidemic in China, the second outbreak occurred in Saudi Arabia with the Middle East Respiratory Syndrome (MERS). Covid-19 is a zoonotic disease caused by the virus Severe Acute Respiratory Syndrome coronavirus 2 (SARS-CoV-2). The virus occurs naturally in animals, and researchers believe that the host is most likely bats because of its genetical similarity to a bat coronavirus, and that it then jumped to humans. But contrary to what has been speculated, there are no documented cases of direct bat-human transmissions, suggesting that an intermediate host was likely involved between bats and humans, and that the migration to humans occurred prior to the first case detected in China.

Scientists have estimated that there has been an increase in zoonotic events between 1940 and 2004, the majority of which originate in wildlife. Examples are the Ebola outbreak in Africa in 2013-2015, believed to stem from fruit bats, and the outbreak of a rare type of encephalitis in Panama.

There is also increasing evidence pointing to the links between this spread of zoonotic diseases and deforestation. For example, the outbreak of a type of malaria common in macaque monkeys that spread to humans in Malaysia in 2002, is linked by scientists to deforestation caused by the expansion of oil palm plantations.

When natural forests have been cut down, forests animals are brought into increased contact with humans. The clearing of forests might shift the location of breeding sites of vectors, for instance mosquitoes, facilitating the spread of zoonotic diseases like macaque malaria. Deforestation and forest disturbance might alter the population dynamics of various interacting animals and plants, like bats and fruit-bearing plants, bringing bats closer to people. The rise of emerging infectious diseases seems to also be associated to climate change, although more research on the issue is needed. For all we know the next outbreak can occur in the arctic.

Under normal circumstances parasites like coronaviruses would not infect us, because they are not “human diseases” and chances are good that they will die with us. If the places where they live are not disturbed these viruses prefer to stay in their natural habitat, but deforestation and other environmental stress force them to find a new host. Covid-19 was not searching for humans to infect, it was brought in close contact with humans, probably through a pangolin that was sold in a wet market.

There are some efforts to predict future pandemic outbreaks, but the idea of predicting zoonotic disease outbreaks is controversial, because there does not seem to be any general patterns that can be used to make accurate predictions due to the complexity of host-agent-environmental relationships.

Rather than trying to predict the future, better and more coordinated surveillance of zoonotic outbreaks has to be put in place.

Global coordinated responses are crucial, and this points to the importance of strengthening the support to global institutions such as the World Health Organization, as well as to more collaboration among researchers across the globe. Research funding is crucial and global collaboration is now more important than ever. Planetary health is a key emerging interdisciplinary research field linking human health and global environmental change. We need more efforts and similar initiatives.

We also need to seriously question and change our production and consumption patterns since these have immense environmental consequences. Our appetite for meat has to change, but we also need to change other activities that demand more and more forest land, and which are a threat to our survival. Otherwise, our food production system will kill us, sooner or later.

This article was also published on the website Plaza Publica (in Spanish).

The topics discussed in this blog post are also the theme of episode 2 on the new podcast Pandemipodden (in Norwegian).