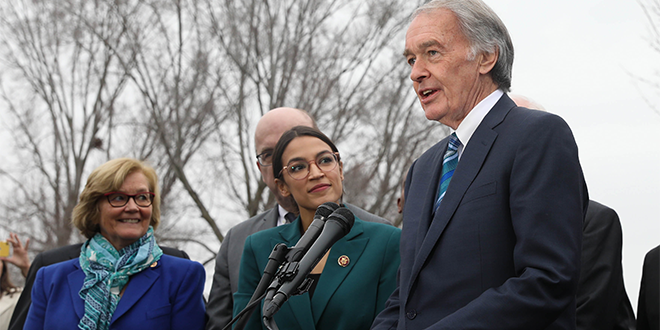 The Green New Deal (GND) was initially a term proposed by the infamous neoliberal New York Times columnist Thomas Friedman in 2007, and it transformed into the leading United States legislation designed to address climate change and economic inequality.

The GND refers to President Franklin D. Roosevelt’s New Deal that responded to the Great Depression with social and economic reforms.

While there are aspects of the GND worth respecting and acknowledging, presently it is an accomplice to green capitalism and, consequently, a threat to inhabited and (socially) valued rural landscapes.

Making the Best of a Techno-industrial Situation

The GND tries to preserve something that is environmentally and socially destructive instead of taking seriously the social alienation and ecological crisis in full motion. I should acknowledge, however, the genuinely positive aspects of the GND that should be affirmed in policy. The claim to “stop current, preventing future, and repairing historic oppression of indigenous peoples, communities of color, migrant communities” is a step in the right direction (p. 5). This rhetoric is important, even discursively, given the genocidal and ghettoizing processes still happening in the US. This is especially so with the rise of migrant concentration camps and Trump’s appeasement of white supremacist narratives that empower neo-fascists groups across the country.

Furthermore, the GND advocates for “supporting family farming” and “building a more sustainable food system that ensures universal access to healthy food” (p. 8). Wow! This is amazing, even if the impotence of rhetorical ambiguity lingers. This is combined with challenging environmental racism and “funding for community-defined projects and strategies,” which exist alongside efforts of “restoring natural ecosystems through proven low-tech solutions that increase soil carbon storage, such as land preservation and afforestation” (p.9). This is music to my ears!

It continues with protecting biodiversity with “locally appropriate and science-based projects” and, still more, “identifying other emission and pollution sources and creating solutions to remove them” (p. 9). It also emphasizes making housing and infrastructure energy efficient—even if how this is implemented will have serious implications.  Furthermore, the GND document’s emphasis on equity and benefit sharing cannot be appreciated enough. It seems the rural transformations advocated here with “low-tech solutions,” locally appropriate” projects and “restoring natural ecosystems” offers an important path towards socio-ecological sustainability.

Within the authoritarian democratic or Neo-illiberal context of the US, the GND appears as a breath of fresh air, yet there are still red flags to consider.

The GND situates itself within the “climate-conflict” narrative, which is well-known for hiding the political and economic drivers of ecological catastrophe (p.4). Thus reinforcing, if not fueling, land grabbing and environmental conflicts in the name of the green economy and climate change mitigation. This coalesces with omitting the geopolitical ecology issue of the US military industrial complex—an entity that pollutes more than 140 countries—from the GND conversation. Indicating that the public should prepare for “ecological tanks,” “sustainable violence” and the rolling out of “green repression.”

The flowery green rhetoric leads to the question: What is “clean?” What is “healthy?” The usefulness of the GND will depend on how “clean” and “healthy” air, water, food and nature will be defined (p. 5). Rural as well as urban space will depend on this definition. The stripping of the Environmental Protection Agency (EPA) under Trump and the prevalence of “corporate science” in the US does not muster confidence, instead only highlights the severity of this issue.

Then there is the well-known policy/planning code words. Where repairing and “upgrading the infrastructure,” buildings and deploying “’smart’ power grids” has serious social control implications. Monitoring consumption patterns of people through the proliferation of surveillance devices is creating what was only a wet dream for classical fascists in the 1930s. Urban renewal, infrastructure repair and resilience are increasingly becoming words synonymous with population control and counterinsurgency. This is also a hazard with participatory and community defined projects in urban neighborhoods. Overall this reliance on positive or “yay” phrasing ignores how many of these positive projects are little more than political technologies of control that will stifle—if not prevent— unmediated neighborhood and grassroots organizing against environmental control and catastrophe.

This extents into indigenous territory. The document's uncritical view of  free, prior and informed consent (FPIC) consultations as a solution to indigenous developmental and participation is inadequate. This perspective implicitly hides the disingenuous and contested (colonial) politics behind these bureaucratic procedures that define consent as consultation.

Finally, the deployment of “renewable energy” as a solution is laughable. Proclaiming to meet “100 percent of the power demand in the United States through clean, renewable, and zero-emissions energy sources” displays not only a blind faith in (inaccurate and reductionary) carbon accounting, but demonstrates an ignorance in material consumption of these infrastructural systems and the land they require.

We must internalize that Industrial-scale renewable energy is a myth. Instead of continuing energetic flows within people and ecosystems, they instead power the Frankenstein that is industrial and cybernetic infrastructure. Moreover, If we are going to be accurate—as was written elsewhere, we will call renewable energy “fossil fuel+.” This term cuts through the propaganda from energy companies, governments and shortsighted environmentalist that uncritically promote industrial-scale renewable energy systems as a solution to ecological crises.

We need to recognize the cost of powering modernist infrastructure, but also that every single aspect of renewable energy is dependent on fossil fuels for producing factories that make extractive machinery, which then fuels mining activities. The fossil fuels that power mining, smelting, manufacturing and transportation infrastructure and so on. The list is extensive and are related to multiple and proliferating environmental conflicts. The supply chain and life cycles of these technological apparatuses are poorly recognized; meanwhile the expansion of fossil fuel+ systems implies a spread of land control, resource extraction and conflict in rural areas.

The issue identified with the GND resolution also emerge in academic debates. In the Boston Old South Church on April 11, 2019, Noam Chomsky  discussing the GND said:

…the general idea is quite right and there is very solid work explaining and developing in detail how it could work. There is a very fine economist at University of Massachusetts Amherst, Robert Pollin, who has written on this in extensive detail in close analysis of how you can implement policies of this kind.

Reviewing the recent debate between green growth and degrowth in the New Left Review, it seems Robert Pollin falls carelessly into this false conventional and renewable energy dichotomy. “[I]t is in fact absolutely imperative that some categories of economic activity should now grow massively—those associated with the production and distribution of clean energy” (p. 7). This is complemented on the next page: “the single most critical project is to cut the consumption of oil, coal and natural gas dramatically and without delay” (p. 8).

While it is easy to agree with these statements, the problem arises: fossil fuel+ infrastructure and supply chains are radically dependent on the consumption of oil, coal and natural gas. Even putting to the side, the complications of placing wind turbines around agriculture are minimized (p. 15) there are substantial issues with his vision here. Pollin’s advocacy for job transition through infrastructure renovation and renewable energy development is appreciated—lending some weight to Chomsky’s statement. The fact, however, remains: economists and “modelers” celebrating the false conventional versus renewable energy dichotomy will invalidate their work in whole or in part, or at the least continue the externalization of economic costs where rural, forested and mineral rich areas will be targeted for resource extraction.

On the degrowth side of the debate, Mark Burton and Peter Somerville, were quick to highlight Pollin’s flaws. Pointing out his uncritical use of Gross Domestic Product (GDP), Burton and Somerville look at the faulty data employed to propagate the myth that the US, Germany and the UK decoupled from CO2 emissions between the years 2000-14. Importantly, they recognize the amorphous double-headed harbinger of “rebound effect” and fossil fuel+ when they write:

The Countries that are most advanced in developing renewable energy, such as Denmark and Germany, have also expanded their consumption of fossil fuels, particularly coal; the same applies to the US, China, India, Canada and Australia. To replace oil, coal and gas with other sources of energy would take something like an 18-fold increase in renewables deployment.

While Sander’s 2020 Green New Deal still requires greater attention, we can see how this green rhetoric lead to continued disruptions and resource grabs in rural areas. Instead, we should pressure for—in and outside policy circles—for more serious environmental policy that will decentralized ecological knowledge and promote the restoration of socially degrading and ecocidal impacts created by modernist development. We should take the best from the GND and Pollin, but continue to push towards developing degrowth and post-development practices. The insanity of industrial humanity must yield to needs of the earth and all of its inhabitants.