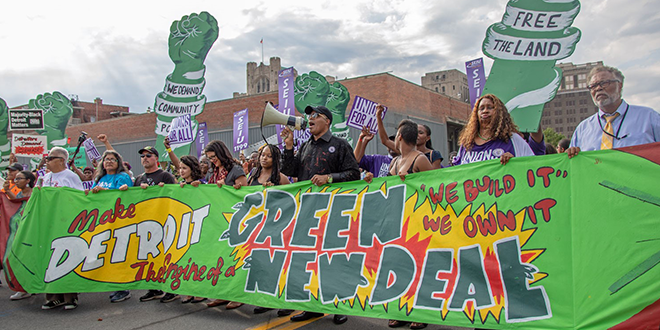 Skeptical and cynical, a climate justice organizer asked me to read Bernie Sanders’ version of the Green New Deal (GND). On August 22, 2019, as part of his presidential campaign, Bernie released an elaboration of the GND program. The movement organizer challenged me to find the “gaps,” “black holes” and offer “constructive feedback” on the environmental program (drafted by many die-hard environmentalists).

The hope, on my end, is less about policy feedback and more about communicating with the mainstream environmental movement the depth of environmental policy problems.

Before moving forward, we have to first recognize that land defenders across the world, engaged in generational ecological struggles, are continuously killed, imprisoned and, now, sidelined by the media in favor of “climate youth leaders.”

This denial markets discontinuity with previous—and continuous—militant ecological struggles, a problem that should be rectified regardless of the GND.

Following up Green New Deal Part I on the Congressional Resolution, Bernie’s GND makes genuine attempts at socio-ecological sustainability and corporate accountability. While genuinely impressive, it does retain profound flaws. Flaws that require immediate redress or negotiation if the GND will be more than the largest green capitalist swindle in history. Bernie’s GND represents one of the greatest statist social and environmental reforms: replete with wealth redistribution, social protections and stronger environmental regulations. The proposal is not anti-capitalist and with this in mind, let us further inspect the significant improvements and fatal flaws of Bernie’s GND.

The Good: Bernie “Keep’n it Real”

In the context of rising “corporate” and “youth” environmental activism, the greatest concern with “climate change” policy is neglecting the military-industrial complex and relying heavily on market-based approaches. Bernie’s GND, however, confronts these issues. Bernie wants, not only the US, but also the BRIC countries to collectively redistribute military spending to the “shared enemy: climate change” with allocating “1.5 trillion annually on weapons of destruction” to public (and hopefully not private) environmental programs.

This GND does not explicitly or implicitly support programs like payment of ecosystem services and Reduced Emission for Deforestation and Forest Degradation in Developing Countries (REDD). The document flirts with offsetting to “pay farmers to keep carbon in the soil” or “offset the costs” to make “farms of all sizes transition to ecologically regenerative agricultural practices.”

Conservation policies are instead organized around the public sector through the Civilian Conservation Corps (CCC) and Land and Water Conservation Fund (LWCF), which indicate signs of challenging market-based conservation. That said, “The Green Climate Fund” has the potential to replicate and continue exactly what the Clean Development Mechanism (CDM) has been doing: spreading so-called “green” or “sustainable development” projects in the Global South that are responsible for increasing environmental conflicts and environmental destruction.

There are three concerns that emerge in the “Conserving Our Public Lands” section. Firstly, the conservation vision separates humans from the natural environment. The nature/human division and resulting psycho-social alienation is affirmed by this division. Undoubtedly, this is a huge socio-cultural challenge to bridge, yet it remains foundational to impoverished socio-ecological relationships underlining climate catastrophe. Secondly, caution should emerge when talking about invasive species. This suggests going Beyond the War on Invasive Species: understanding their origins and how to work with and not against them. Finally, reviving national park infrastructure should not promote industrial infrastructure (flush-toilets, paved roads, etc.). Instead, national parks should be exemplar sites of dry-toilets, forest gardening and truly innovative “green” or “ecological” infrastructures rooted in permaculture and “dark green” building techniques.

The list is extensive, but includes rejecting “false solutions like nuclear, geoengineering, carbon capture and sequestration, or trash incinerators” to get 100% “sustainable energy.” Moreover, beside redirecting money from the military industrial-complex and going after trade deals, there is probably one of the most genuine and comprehensive written intentions to hold fossil fuel industries accountable. This combines with the neglected problem of raw material extraction for so-called renewable energy systems:

To prevent an outsized impact on the environment form harvesting raw materials, we must build the wind turbines, solar panels, new cars, and batteries we need with as many recycled materials as possible. We will establish a ‘take back’ program to require large corporations that produce goods with the materials needed for this clean energy transition to pay to take those goods back from consumers who no longer want them….

This is unprecedented. The GND will bring significant socio-ecological and economic improvements, but there are notable flaws that beg immediate redress.

The Same Old Song: The “Bad”

The Green New Deal advances the capitalist and statist project, albeit in a more socially and ecologically responsible way. That said, at least three serious flaws emerge requiring immediate amendment. First, is the contradictory claim of “reaching 100 percent renewable energy for electricity and transportation by no later than 2030 and complete decarbonization by 2050” and “[E]nd[ing] the greed of the fossil fuel industry and hold them accountable.”

Every single aspect of so-called renewable energy is based on fossil fuels.

Even during operation—the least demanding phase—lubrication is needed for the spinning wind turbine. Regardless of the emphasis on recycling above, there are still serious obstacles. Beside the onslaught of mineral extractivism and processing, if Bernie’s GND really claims to hold the fossil fuel industry accountable then serious price shocks are in order. Worse, however, will be the retaliatory economic warfare from the fossil fuel industries. The central challenge then becomes reconciling, seriously (not just with abstract accounting exercises), the raw materials, smelting, manufacturing and transportation, but also political negotiation with the fossil fuel industry (among others).

Nothing is impossible, yet the lie and misuse of the term renewable energy for over fifty years is coming back to haunt industrial society. This is the central hurdle for team Bernie.

Second is the trajectory of development envisioned in the GND. The “technological fix,” or “delirium,” saturating the GND is astounding, relying heavily on “smart technologies” and “electric cars.” The GND claims bringing “all non-electric uses of energy onto the electric grid” and spending “$216 billion to replace all diesel tractor trailer trucks with fast-charging and long-range electric trucks.”

The fetish of electric vehicles is long false, because they, like wind turbines, are all dependent on extreme hydrocarbon and mineral extraction, processing, manufacturing and so on.

Not to forget the amount of mineral extraction and conflict minerals needed to expand the electric car and smart city digitalization market. Implicit is the idea that there will be a certain amount of fossil fuel extraction to make everything electric or renewable, yet this does not take into account the limited shelf life of electric components, magnets as well as the energy necessary to recycle these components, which speaks to another lacking infrastructure.

This extends to the “$150 billion in infrastructure grants” to spread “smart” technologies and the internet everywhere. Thus rolling out a techno-authoritarian biopolitical dream through so-called green infrastructure, which will fail, break and require upgrades. This is not ecologically sustainable or restorative, instead it will generate unprecedented amount of e-waste and spread high-grade toxics into the earth and its inhabitants.

Finally, Indigenous territory and rights need to be taken seriously. The document states: “We will abide by the United Nations Declaration on the Rights of Indigenous Peoples [UNDRIP] and ensure the free, prior and informed consent by Indigenous Peoples.” This means UNDRIP needs to be enforced, ensuring—above and over state and corporate power— that all impacted people are granted veto power over projects, the elimination of corporate–state–elite vested interests and “enforcing the actual meaning of the words Free, Prior and Informed Consent.” Anything less should be regarded as political manipulation and deception to continue genocidal assimilation practices of Indigenous peoples.

So it Continues: The “Ugly”

These are the “good” and “bad” aspects of the GND, which combine around the ugly politico-ecological situation humans and nonhumans face today. Acknowledging and reconciling the “bad” will create a more honest and stronger GND. More importantly, the GND has almost as much treachery as potential embedded in it. Environmentalists, autonomous activists, anarchists and concerned citizens must continue to struggle for more.

If Bernie wins and the GND is passed, capitalism, extractivism and computational governmental control will prevail, and rural spaces will be threatened as with any other government.

The GND opens socio-political possibilities, but these possibilities need to be actively expanded by political organizing, action and solidarity. Bernie’s GND is by no means a victory against socio-ecological catastrophe. The GND is part of the structure of conquest—the state—and the uncomfortable and ugly reality is that until the apparatus of measurement, control, confinement, exploitation and processing is totally subverted, no human or nonhuman will be safe.