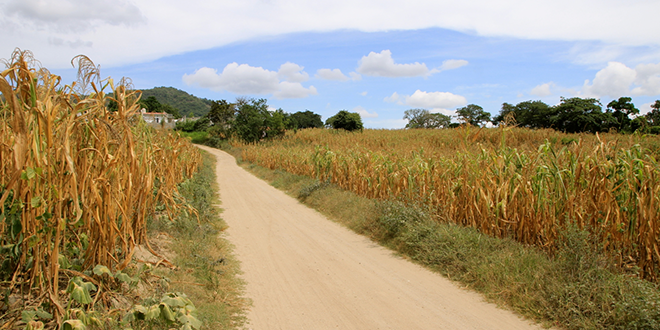 This post is a part of our Notes from the Field section, which contains reflections on fieldwork and methodologies.

In the midst of a dry spell

In much of central Guatemala – a mountainous and predominately rural district already susceptible to drought – this year’s wet season is proving to be among the driest in historical memory. In the lower valleys – typically a sea of green milpa[1] this time of year – the lack of rain, up to fifty days without a drop, gives the appearance of a landscape doused with Agent Orange. All living vegetation – tree leaves, grasses, herbs – are wilted; corn plants that have yet been removed take on a yellowed and stunted form, bearing no yield. Even farmers with access to irrigation report substantial if not complete loss, as water from both above and underground sources has become scarce.

In the upper reaches of the Chaucus Mountains, in the Maya-Achí territory, a combination of just enough rain at the beginning of the season and lower temperatures result in pockets of surviving milpa, coffee, and other native crops. Traveling over dusty roads, I visit with indigenous farmers as part of a study documenting the spread of agroecology – a combination of traditional and contemporary practices that emphasize the sustainable use of local resources, such as native varieties and seeds, organic material and composts, biodiversity, and local knowledge.

My guide, a local agroecological promotor named Julian Vasquez, is eager to introduce me to several of his neighbors involved in a pilot project he oversees, which offers assistance to farmers inspired to make the transition from conventional to agroecological practices. The idea is to establish a series of demonstrative plots that display the potential of diversified and organic agriculture – a way of farming, Vasquez attests, more in tune with nature as well as traditional principles of wellbeing and community health.

Because of its emphasis on long-term processes and redesign, many of the benefits of agroecological production may take years to come into fruition, making it difficult to compete against the rapid results offered by chemicals.

Yet in times of water scarcity, such as now, the evidence couldn’t be any clearer. In the terrain of one farmer, Carlos Rodriguez, an experiment has been established in which one side was planted conventionally, the other side agroecological/organic. Both sides were planted with the same seeds, on the same day.

Agroecology makes a difference, but it takes time

The results are compelling (see images below). On the side where agroecological practices are utilized (natural composts along with limited weeding and a technique involving small “curves” in order to prevent erosion), the corn, beans, and squash plants are green and robust. On the opposite side, where synthetic fertilizers were applied, as well as herbicides to remove plants thought to outcompete the crops (a practice introduced by agronomists), the corn is half the stature and beginning to yellow.

“The limitations to chemical farming couldn’t be clearer,” states Vasquez, as we walk through both parcels, investigating leaf and stem sizes, the color and texture the soil. On the conventional side, “The crops are drying up, because the soil is exhausted, and because there is no coverage to hold moisture. On the agroecological side, however, the plants are still strong and there is little stress” – even despite the lack of rain. “There may not be as good a harvest as in years of normal rainfall, but at least there will be something.”

Acknowledging that there are also limits to agroecology – the extreme situation in the lowlands being a case in point – Vasquez and other community leaders assert that wider scale adoption of sustainable and ancestral practices would have far-reaching implications, from forest conservation to regional health issues to migration and its related impacts.

“People from all over the territory are leaving, due to crop failures,” claims Vasquez. “They go to the fincas (large industrial plantations) or to the United States.” These departures, typically by men, “break up the family structure and cause many problems in the community.”

While interest in more sustainable forms of production and healthier consumption is noted to be on the rise among Achi families, a greater movement will require, as local leader Alfredo Cortez put it, “a complete change of attitude” by farmers and the community as a whole.

“We’ve grown accustomed to handouts, and taking the easiest path,” states Cortez, reflecting on cultural changes throughout the region, due in part to external development interventions that promise immediate solutions, while incorporating aid and other demotivating tactics.

“Agroecology is difficult work, and a slow process. But people are beginning to understand that convenience isn’t necessarily better; that it causes diseases, and social problems… We’re looking to the livelihoods of our grandparents, and rethinking our values and principles.”

Back at Rodriguez’s plot, Vasquez plans the next encuentro campesino, in which he and his colleagues will bring as many interested farmers as possible to view the results of the experiment, and learn about the methods behind it.

“Right now the government is handing out chemicals,” states Vasquez, “in response to the drought. We have an alternative, based on our own ancestral knowledge and resources. But it will take a lot of work to change people’s minds.”

[1] The foundation of traditional Mesoamerican agriculture, milpa constitutes a trilogy of maize, beans, and squash, along with a multitude of other native and semi-domesticated greens, and is typically grown without irrigation and in small family plots.