Is cultural identity a luxury good or should it be a foundation for society? How does one balance the livelihoods of farmers while addressing the need to rethink what crops can be grown in California? Can modern agriculture contend with climate change? 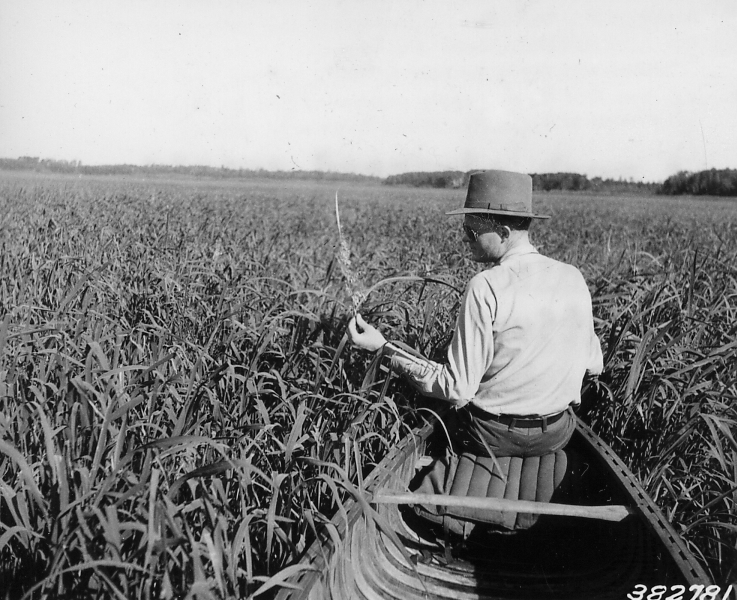 Wild rice: the sacred grain of the Ojibwe people and the main source of income for thousands of farmers and laborers in California. The recent droughts in California bring to light many complex questions regarding our modern agricultural system, cultural identity, and the impacts of climate change. Is cultural identity a luxury good or should it be a foundation for society? How does one balance the livelihoods of farmers while addressing the need to rethink what crops can be grown in California? Can modern agriculture contend with climate change?

With all this in mind, I wish to draw attention to the dilemmas posed by wild rice production.

Like many crops grown around the world, wild rice is a sacred and ancient food source for the indigenous peoples of North America. Growing in the shallow lake beds of the northern United States and southern Canada, the Ojibwe people have harvested the crop for centuries. Yet with growing demand for this delicious and healthy grain, its production has expanded from its native home to California, where it can be grown and harvested using modern agricultural techniques. Of course this poses many environmental questions, particularly when one observes the serious drought that has wreaked havoc on California’s farm country.

Wild Rice, Zizania aquatica or Manoomin, is ingrained in the Ojibwe culture. Manoomin is considered a gift from the Creator, who instructed the Ojibwe to move from their homes on the eastern seaboard “to the place where the food grows upon the water”[i]. For many centuries, this crop was the lifeblood of these northern Indigenous communities providing a connection to the land and their cultural heritage, as well as a means of economic survival. Native wild rice faces many natural threats; migrating waterfowl, heavy storms and high winds, and early frosts in the cold northern climate. In order to survive, the rice has evolved to ripen at different times to avoid being wiped out. This evolutionary advantage made harvesting complicated for the native peoples who had to harvest the rice by hand from canoes. After the harvest, the rice was processed using a variety of age-old techniques. Today, uncultivated wild rice must be harvested using traditional ways and only by those who are licensed to do so, meaning a higher price for the food[ii]. For many, the harvesting season provides economic security for the coming year and is a vital income.  But not all wild rice is grown and processed like this – in recent years, researchers and agricultural firms have worked to “tame” the rice. This clash between mass production and small-scale harvesting by native populations raises social and economic concerns for both the Ojibwe people and California farmers.

High in fibre, anti-oxidants, and protein, wild rice has gained popularity as a healthy alternative to white rice. In the 1950s, researchers from the University of Minnesota set out to domesticate wild rice, eventually making it possible to create new varieties of rice for mass production. Nor-Cal, a company based out of California now has a patent on wild rice, which secures them the right to breed hybrid varieties[iii]. Today wild rice is grown across vast swaths of northern California. Many Natives and non-Natives alike have serious misgivings about both the “industrial” production of food and the ethics of patenting crops. For one, flooding the market with paddy-grown wild rice has brought about a significant drop in the price, making it difficult for Native communities to make a living through hand harvesting, as they have done for hundreds of years. In addition, many have doubts about the environmental and social impacts of these modified crops, noting the impacts on small-holder farmers, loss of biodiversity, issues of genetic drift between modified and non-modified crops, as well as the looming fear of herbicide and pesticide resistance to name a few.

On the other hand, many praise mass production and the modification of rice, stating that in order to feed our growing population, technological advances in agriculture will be vital.  In response to Winona LaDuke’s article in Orion[iv], in which she poses her concerns with paddy rice and loss of cultural identity, Ryan Mykita raised the point that the small scale harvest of the “sacred rice” is only significant to a small segment of the population. He argued that most people don’t have the luxury of sustaining cultural heritage, stating that many need food, need jobs, and need profit driven companies to bring them[v].  Mykita points to an ongoing dilemma – how do we meet the needs of a population while respecting culture and the planet’s strained resources?

It is argued that cultivating wild rice has environmental benefits. The large shallow bodies of water provide food and habitat for migrating waterfowl and shorebirds, which make their way by the thousands along the Pacific Flyway twice a year.  With shrinking sanctuaries, the birds rely on these rice paddies for rest and recovery. Others contend that growing rice on agricultural land protects the native stands from overharvest, while meeting the demand[vi]. And meet demand they do; according to the Whole Grains Council, California now produces 10,200,000 pounds of rice each year[vii]. California Wild Rice states that,

The pleasant growing conditions in California are optimal for wild rice production, characterized by a long warm summer with little rainfall. Owing to the lack of rainfall, during the growing season, the water necessary to create the paddies for wild rice flows cool and fresh from the high Sierras into the wild rice growing regions. The water is controlled through a system of dams and irrigation networks, allowing farmers to regulate the amount of water, and when and where to water[viii].

This brings us to the important issue of climate change and agricultural production. The past three years have been some of the driest on record in California. The snowpack in the Sierra Nevada mountain range was the lowest in a century according to the US Natural Resources Conservation Service[ix]. Rice on average requires 5.1 feet of water applied per growing season, making it one of the most water-intensive crops in the state. Multiply that by the 550,000 acres planted in a normal year, and you get 2.8 million acre-feet of water, or about 6 percent of the state's total consumption. The drought has curtailed rice cultivation, especially in the Sacramento Valley, where almost all of the rice is grown in California. Last year, 434,000 acres of rice were planted statewide compared to 567,000 in 2013, according to the California Rice Commission[x]. Experts are saying that 25 percent of California's $5 billion rice crop will be lost this year due to lack of water[xi].  This could mean nearly one third of rice fields could be bare, meaning huge hits for California farmers. UC Davis puts this year’s losses statewide at $2.7 billion and 18,000 jobs[xii]. With weather patterns expected to change dramatically in the coming century due to climate change, it is likely that droughts such as this will become more and more common. This raises an important question; can California’s farmers reconcile the upcoming conflicts between water intensive crops and their livelihoods?

It is clear that California wild rice raises many questions which will become increasingly pressing as the impacts of climate change become more visible, population grows, and our ever-globalizing world demands consuming more. Can farmers rely on such water intensive crops to make a living in the future?  Will the future be filled with technological solutions to changing weather patterns? Or will we see farmers and consumers changing their habits both in the field and in the supermarket? Will Indigenous communities be forced to compromise that which they hold sacred for the sake of mass production?  Or will traditional harvesting methods and the Native understanding of the land be a savior in the face of climate change?