With increasingly more people living and growing up in urban environments, their connection to land, farming and rural food production risks becoming weaker and more fragmented. I am one of those people who grew up knowing very little of where my food came from and who produced it. This summer, spurred by the idea of sustainability in the local, I decided to find out: What does life look like for small-scale farmers where I am from? 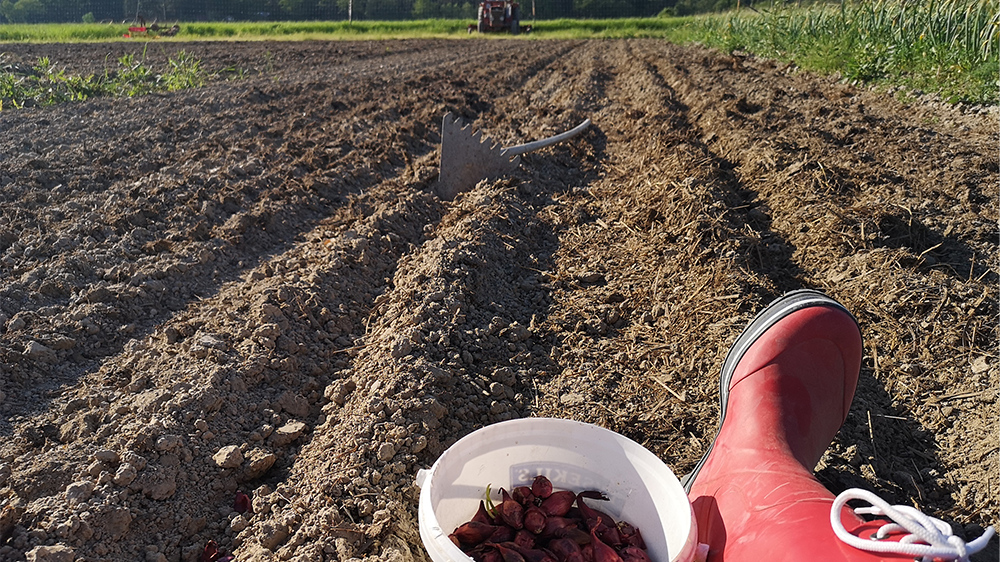 Many hours were spent planting onions in the heat. Photo: Joanna Svärd.

I come from Västerås in central Sweden, a rather large city in Scandinavian terms. No members of my family have been farmers, or owned a farm, at least in the last century – they have been priests, teachers, diplomats, industrial workers, and politicians. Consequently, I was 26 years old when I first experienced farm life, at a small farm not far from Oslo in the summer of 2020. As a volunteer there, I was launched into work that was completely new to me: feeding animals, gathering eggs, handling irrigation systems, taking night shifts during lambing, moving kilometers of fencing, witnessing an emergency slaughter, and spreading compost across a field to then dig growing beds in it by hand! It was time-consuming, hard work, and I could feel it in my body. Farm life was tough. I was constantly exhausted from muscle work and learning new things, and after a few weeks all I wanted was to get home to the city.

Still, one year later I was back. With my hands in the soil, boots on my feet, and feeling even more eager to learn from those who live and work on the land to provide locally grown food. My experiences at the Norwegian farm had sunk in and left a mark. I realized that I knew nothing about how small-scale farmers live where I am from. So, in the summer of 2021, I decided to find out for myself. This time around I knew a bit more what to expect, even though every farm is shaped by the landscape and natural conditions of its specific location.

In the lowlands of Västmanland, my home region, the soil is clay-based, and the landscape is flat. There are few grazing animals left to roam it, since most of the farmland is used for grass or grain production. As one travels through the region, miles of open grain fields is a common sight, set apart by bits of forest. That said, the northern part of the region belongs to Bergslagen, an area dominated by forests and valleys, with a rich history of mining and metal industry, and where the farms are more forestry-based.

The farms I visited as part of my fieldwork are multifunctional, with a variation of animals and crops, as well as forestry, and one farm has moved into tourism with their own café. Most of them are organic, to a large degree self-sufficient, and sell their products directly to local customers. The farmers I met consider their forests to be an important asset, both for its ecological and recreational value and as a source of income. They also produce grass and grains to feed their own animals – rather than being part of a large-scale agribusiness. The land’s output is kept on rotation, by moving the grazing animals (often sheep) regularly to keep the grass fresh and contribute to a continuously healthy, nutrient-rich soil.

The farm where I spent most time felt like a green oasis compared to the large grain fields along the main roads (pictured above). Their land is a mix of forest, grazing land and cultivated fields, where different animal species live side by side, and with a garden full of berry bushes, fruit trees, planted pots, and weeds.

I was struck by the thriving insect life there, certainly indicating a biodiversity far more extensive than what you would find in the city.

Also on this farm, we generally maintained the crops by hand. To me, the constant exposure to and dependency on the weather to get things done was striking. During several days when the temperature rose above 30°C, we had to minimize how much work we did by taking many breaks and drinking a lot of homemade lemonade. Still, the sun burned my skin while planting onions and potatoes on the fields. As time went on, I tried my hand at catching a swarm of bees, building a greenhouse, as well as some crop harvesting towards the end of the summer. I even helped separating lambs from their mothers when it was time for that.

Not all tasks were fun, and most were hard work – sometimes even rather gross – but working hands-on at the farms in this way gave me a new sense of satisfaction and belonging.

Spending time at these small-scale farms has made me appreciate how precious our food is – every crop, every vegetable, and every animal. It is incredible how much time, work, and knowledge goes into the food that these farmers produce. They know the land and the animals and could explain to me in detail what needs they have and how to meet them. In their quiet way, they displayed a great deal of love for their farms.

Working alongside small-scale, organic farmers in their fields have helped me realize the cultural, ecological, social, and political importance of local food and those who produce it.

It is a shame how easily we, in affluent Scandinavia with its supermarkets, large-scale imports, and horrifying amount of food waste, take the food on our tables for granted. The continued growth of industrial agriculture, based on large-scale monocultural production, brings with it a stronger need to cultivate the knowledge of the small-scale farmers, who produce food with consideration for the natural conditions of their particular plots of land. While recognizing that the farm lifestyle may not be for everyone, I urge everyone with an interest in food and sustainability to try it out!