UiO Centre for Development and the Environment Oslo SDG Initiative
Main navigation
Back to uio.no
Sub navigation Menu
News and events > News > National Conclave on Institutionalizing the SDGs in India

National Conclave on Institutionalizing the SDGs in India

To what extent is the Indian government promoting and institutionalising the SDGs within a broader policy framework? And how is the 2030 Agenda being integrated in state planning, budgeting, monitoring and financing for SDGs? The Oslo SDG Initiative was represented by Professor Dan Banik and Professor Sidsel Roalkvam in the second National Conclave on Institutionalizing SDGs in New Delhi on 4th and 5th February 2019. 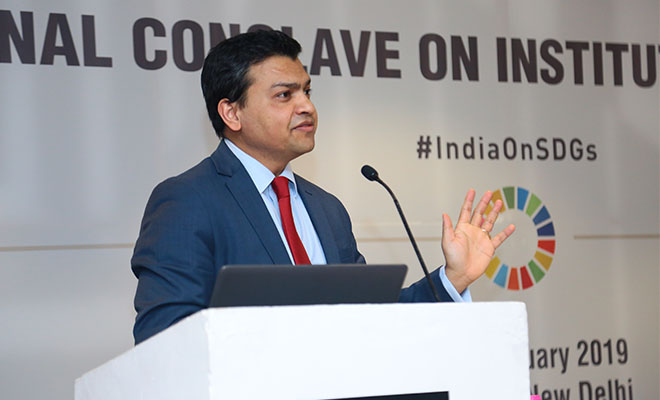 Prof. Dan Banik cautioned against a one-sided “win-win” rhetoric that sometimes characterizes discussions on the SDGs.

Several state governments in India have actively begun planning and implementing programs and schemes that are closely aligned with the SDGs. At the Conclave, participants discussed how institutional capacities could be strengthened, the contribution of technology and innovation to the SDGs as well as the role of communication and media in promoting sustainability. The overall aim was to get a status update on the work of various state governments as well as share information on best practices and challenges with the goal of identifying potential strategies to work together on the SDG framework. Prof. Banik and Prof. Roalkvam discussed plans for research collaboration with Indian academic institutions as well as joint events on SDG implementation with various state governments and civil society organisations.

In addition to debating the commitment of state governments in India, there were also numerous discussions on the role that civil society organizations, international agencies and academia can play in promoting the 2030 Agenda and ensuring that no one is left behind in the process of achieving sustainable development.

In his talk, Professor Banik presented the Oslo SDG Initiative to the Indian audience and shared some of the research findings of the Initiative from a diverse set of countries such as China and Malawi. He outlined several ideas that could constitute a research agenda for Indian and foreign academics and institutions to pursue on the SDGs. Prof. Banik highlighted the contested nature of the development discourse and cautioned against a one-sided “win-win” rhetoric that sometimes characterises discussions on the SDGs. He urged officials, academics and civil society actors to address the uncomfortable questions of development and better identify and understand the needs and interests of minorities and societal groups that are typically excluded from the development process.