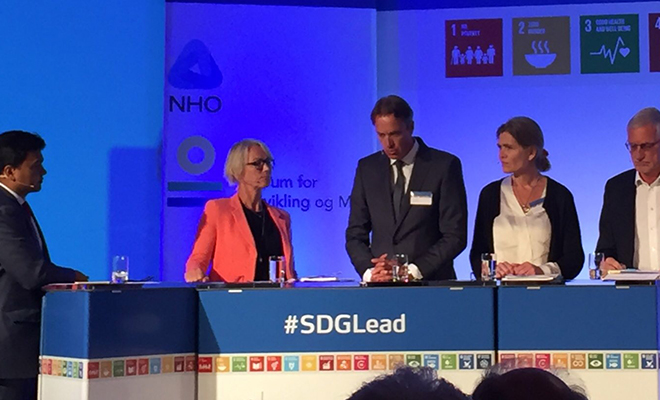 The private sector has shown remarkable interest in the SDGs, but there is still a huge gap between rhetoric and reality.

The business of sustainability

Expectations towards private sector contributions to the 2030 Agenda have been high. For example, 43 % of the world’s 250 largest companies now link their activity to the SDGs, which are often highlighted both as a normative compass and a roadmap for profitable business. By identifying new markets and opportunities for innovation and investment, some CEOs consistently refer to the SDGs as the biggest business opportunity in history. Thus, it is not surprising that many businesses all over the world have warmly embraced, at least on paper, the 2030 Agenda. But the perceived enthusiasm must also be viewed in light of an increased focus on sustainable business in recent years. From what was often perceived as a side-project, without concrete linkages to core business strategy and activities, more companies have now realized that a strategic approach to corporate social responsibility (CSR) can spur competitive advantages. Global challenges – related to climate change, growing protectionism, increasing national and international inequalities and high risk of various types of conflicts – represent financial risks for companies. Thus, what was previously viewed as “non-financial figures” is now increasingly understood to have a direct impact on corporate bottom lines. This acknowledgement has also resulted in increased pressure from investors, insurance companies and banks on companies to include sustainability analyses and data in their annual reports.

Still, there is a huge gap between the rhetoric and the reality. A survey by The World Business Council for Sustainable Development showed that although 79 % of member company reports referred to the SDGs, only 6 % documented strategies and goals linked explicitly to the goals. In Norway, where only 30 % of the 100 largest companies tie their activity to the SDGs, the share of companies that have adopted appropriate mechanisms to measure their impact vis-à-vis the goals is likely even lower.

It is therefore crucial that sustainability commitments are operationalized in order to avoid “rainbow washing” in the colorful palette of the SDGs. Such commitment requires concrete anchoring in strategies and measureable efforts tied to specific SDGs and their corresponding targets. Some have also argued for the need for companies to report on their negative impacts towards the goals in order to provide a more holistic view of a company’s overall impact on sustainable development.

Although it is the responsibility of each country’s government to ensure follow-up of the 2030 Agenda, the inherent expectations of the extent of the private sector’s contributions also requires a systematic approach to evaluating and reporting from a company perspective. During the 2018 High-Level Political Forum (HLPF) – the UN’s annual review mechanism for progress on the SDGs, where countries present their Voluntary National Reviews (VNRs) documenting progress on the SDGs each year – as many as 94 % of the countries that presented VNRs reported that they had consulted the private sector while preparing their VNRs. However, the problem is that such consultations mainly provide anecdotic inputs, and are not very concrete in terms of ensuring accountability of corporate activity on sustainable development. For example, in its 2016 VNR, Norway referred to informal consultations with the private sector, and briefly mentioned Telenor and Yara as examples of how Norwegian companies are contributing towards achieving SDG 8 on decent work and economic growth. This tendency, which fails to take a systematic approach to measuring and documenting the contribution of private sector actors, can result in companies using the SDGs as a mere marketing mechanism, without concrete linkages to national and global follow-up processes associated with the 2030 Agenda.

During this year’s HLPF, Colombia was the first country to include aggregated data from the private sector in its VNR. In collaboration with the Global Reporting Initiative (GRI) and others, the government developed a mechanism to collect and analyze existing data from the private sector that correspond with specific SDG indicators. Thus, Colombia was able to present a more holistic picture of private sector contributions and was able to encourage greater participation and ownership from various actors in the national follow-up of the 2030 Agenda. This is a model that other countries can follow. We also hope the recently launched World Benchmarking Alliance, that aims to name and shame leaders and laggards, can make a major contribution towards concretizing private sector’s role in the agenda.

There is now almost universal agreement on the importance of active private sector participation in achieving the ambitious SDGs. Regardless of whether a company’s motivation stems from altruism, business opportunities or ensuring its own survival, the growing interest in sustainable approaches to business cannot and should not be discredited. To avoid “rainbow washing”, where the SDGs are merely used as a tool for glossy marketing, private sector contributions must be concretized in each company’s strategy and targets. At the same time, governments must employ effective mechanisms to ensure better reporting on the contribution of all actors in promoting sustainable development, which in turn can help facilitate a more constructive dialogue between the private sector and other stakeholders than has been the case so far.

This blog post is based on an op-ed previously published in Norwegian in Bistandsaktuelt.