Recent reports by V-Dem and Freedom House indicate that democracy is backsliding across the world. What does this tell us about democracy and sustainable development in 2021? 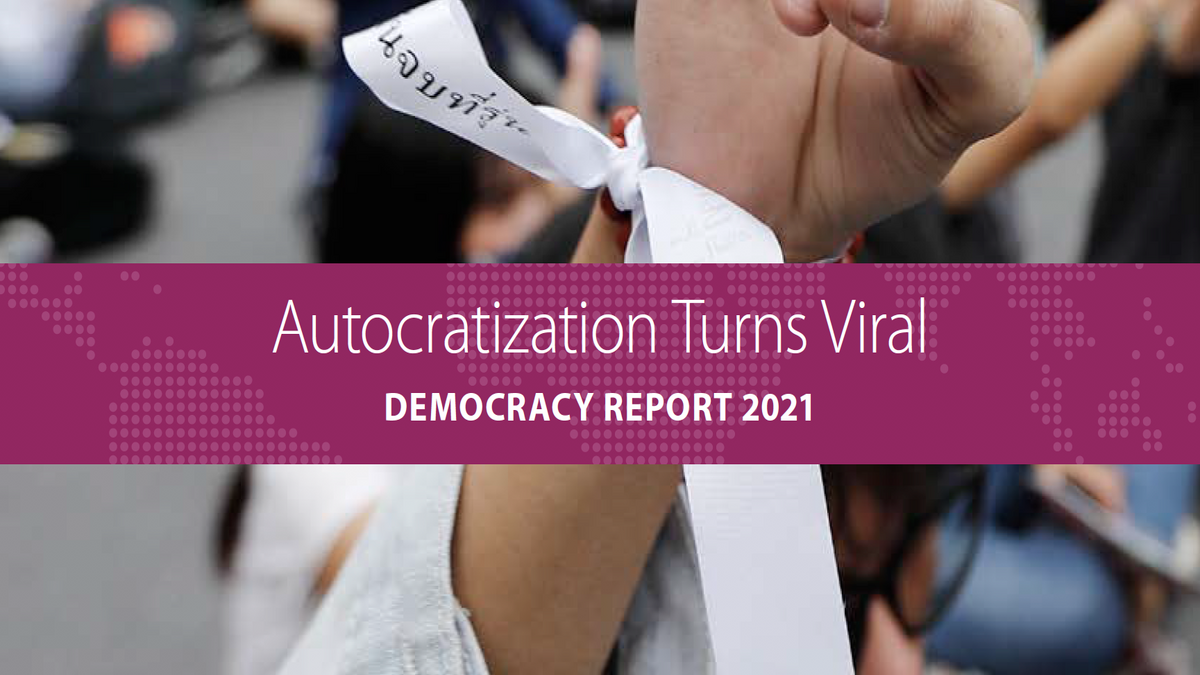 Recent reports by V-Dem and Freedom House indicate that democracy is backsliding across the world. According to Freedom House’s Freedom in the World 2021 report, the coronavirus pandemic, economic uncertainty and conflict contributed to the decline of global freedom in 2020. Meanwhile, V-Dem argues that the world is currently in the “third wave of autocratisation,” with the level of democracy enjoyed by the average global citizen in 2020 being down to the levels around 1990. So what does this tell us about democracy and sustainable development in 2021?

First, pandemic backsliding looms. While most democracies behaved responsibly, nine democracies registered major and 23 moderate violations of international norms. 55 autocratic regimes engaged in major or moderate violations, and two thirds of all countries imposed restrictions on the media. One third of all countries introduced emergency measures without a time limit. The report states, “the final toll on democracy may turn out to be high unless restrictions are eliminated immediately after the pandemic ends.” Nevertheless, the pandemic’s direct effects on global levels of liberal democracy were limited in 2020 and the long-term consequences of the crisis are still unknown.

Second, liberal democracies declined from 41 to 32 countries over the last decade and the share of the world that is autocratic is increasing. The global decline during the past 10 years is steep and continues in 2020, especially in the Asia-Pacific, Central Asia, Eastern Europe, and Latin America. Autocracies are now home to 68% of the population, with electoral autocracies remaining the most common regime type. 87 states are either electoral autocracies or closed autocracies.

Third, autocratisation accelerates, engulfing 25 countries and 34% of the world population. Over the last ten years, the number of democratising countries dropped by almost half to 16, hosting only 4% of the global population. In looking at how autocratisation unfolds, the report finds that autocratisation characteristically follows a similar pattern across different contexts: “ruling governments first attack the media and civil society and polarize societies by disrespecting opponents and spreading false information, then undermine elections.” Poland, Hungary, Turkey, Brazil, Serbia, Benin, India, Mauritius, Bolivia and Thailand are all witnessing such comparable trends.

India, the world’s largest democracy with 1.37 billion citizens, turned into an electoral autocracy in the V-Dem report. For the first time in almost fifty years, Freedom House similarly downgraded India from Free to Partly Free. India now joins all other South Asian countries (Bangladesh, Sri Lanka, Nepal, Afghanistan, Myanmar and Pakistan) in a category that Freedom House considers non-democratic. In the Economist Intelligent Unit’s 2019 Democracy Index, India was categorised as a flawed democracy, defined as countries that hold free and fair elections and where basic civil liberties are respected, but have weak governance, an underdeveloped political culture and low levels of political participation. V-Dem particularly points to India’s shrinking space for the media, civil society and the opposition under Prime Minister Narendra Modi. Nonetheless, Minister of External Affairs, S Jaishankar, dismissed reports that India is facing democratic backsliding at the hands of the Modi government, saying that the country does not need approval or moral lectures from a “set of self-appointed custodians of the world.”

A recent webinar hosted by the UNDP Oslo Governance Centre discussed the implications of V-Dem’s report for SDG 16 implementation. SDG 16 aims to “promote peaceful and inclusive societies for sustainable development, provide access to justice for all and build effective, accountable and inclusive institutions at all levels.” For supporters of the goal, it marked the first time the international community set out a shared vision of the central role that institutions play in sustainable development. However, it is often regarded as a weak goal, criticised for being difficult to measure and monitor, being too political and top-down, and neglecting cultural and local contexts.

The webinar raised several interesting debates. First, how can the UNDP address these issues in its governance programming? If sustainable change is the result of endogenous, internal processes, what can be done if the mechanisms of change themselves are being shut down? In Africa, for example, the UNDP works mainly in electoral autocracies that hold elections on a regular basis but share one key characteristic: the state capture of institutions that are meant to be promoting good governance. How can UN agencies work with institutions that are captured by the state to promote governance? Sarah Lister, Head of Governance at the UNDP, stated that the organisation must focus on the demand-side of governance, take an integrated approach across governance systems, and follow governance principles of accountability. Crucially, governance must be mainstreamed across other themes.

Second, the webinar discussed the extent to which autocratisation really presents a problem. If autocratic leaders deliver citizen expectations, does autocratisation matter? Staffan Lindberg, Director of the V-Dem Institute, explained that the record of non-democratic states is weak, with autocracies tending to have poor economic, political and developmental results. Singapore and China are historical exceptions. Nevertheless, other participants raised the need to work with autocracies to help them become less predatory and better serve their citizens.

This relates to a third point, namely that the democracy/autocracy dichotomy is not always helpful. How can democratic principles find their place in a changing world? What is the future of democracy and democratic principles? With people increasingly questioning the neoliberal state and democratisation, it is important that the UNDP ensures that development remains at the core of its investments in democratisation. Democracy cannot be imposed on all countries, and there is a need to recognise and work with various political systems. As such, we must move away from classifications and rankings to an interrogation of democratic principles on a normative basis.

Finally, we need to be better at highlighting positive stories and support new democracies. Among the top 10 democratisers in 2020 (Tunisia, Armenia, the Gambia, Myanmar, Niger, Madagascar, Ecuador, Fiji, Georgia and Sri Lanka), small countries dominate the trend. These states are oftentimes the most fragile. It is therefore important to back these countries, particularly those that have become democracies for the first time, but also those that have been democracies in the past. Without such support, they risk backsliding into autocratisation.