As much of climate change research in psychology is focused on individuals, we found the youth movement’s collective approach interesting. What motivated thousands of young people to strike for policy change and structural measures rather than individual measures? 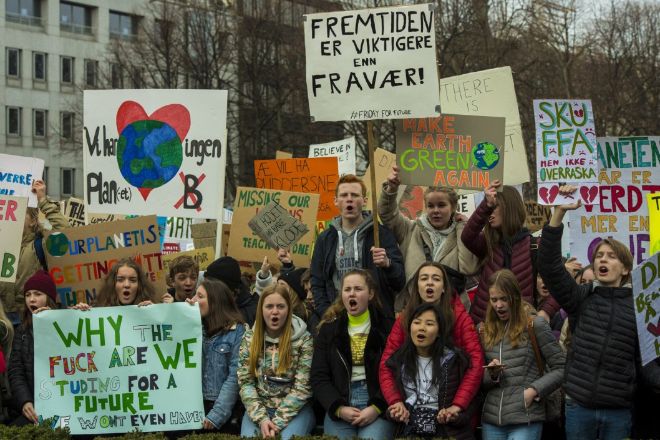 Anja Duun Skauge & Christian Andrés Palacios Haugestad were two of the recipients of the University of Oslo's Sustainability Award for best Master Thesis related to the UN's Sustainable Development Goals for their joint thesis: #FridaysForFuture: A mixed-methods cultural psychological investigation of the youth environmentalist movement in Norway.

The rise of the environmental youth movement #FridaysForFuture has inspired millions of people around the world to protest for political action towards the challenges posed by global climate change. In Norway the strikes pose a particularly interesting paradox, where strong pro-environmental ambitions are contested by the privileged position the oil-economy has granted the young generation. Torn between “climate shame” and rebellion, youth environmental activism can make sense if we examine their perceptions of responsibility for addressing climate issues and their fear for their own future. Psychological research can provide valuable insights into the processes motivating and influencing youth to engage in environmental collective action.

The psychology of climate change

Psychological research has long contributed to understanding how people perceive and relate to climate change. Psychologists have used their theories in order to find clever ways to influence individuals to make more environmentally friendly choices and reduce their own climate footprint. There has even been growing concern regarding how there seem to be more and more people, especially youth, that suffer from “climate anxiety”. However, these approaches run the risk of reproducing a far too prominent individualistic focus to climate solutions. The #FridaysForFuture movement does the opposite: it takes a collective action approach, pointing at structural - rather than individual - change as crucial for addressing climate change. As much of climate change research in psychology is focused on individuals, we found the movement’s approach interesting. We were especially curious as to what motivated thousands of young people to strike for policy change and structural measures rather than individual measures. This led us to write our thesis on youth climate strikes in Norway, which was awarded the University of Oslo’s Award for best Master Thesis on the UN’s Sustainable Development Goals (SDGs) this fall.

The School Strikes in Norway

Following the rise of the #FridayForFuture movement in Norway, we wanted to dig deeper into the motivations of the young strikers and their own take on the situation. Therefore, we decided to conduct our master’s project about the movement, taking a bottom-up approach in which the youth’s own voices would be heard in our research. We went out to the school strikes in order to investigate the phenomenon as it was unfolding and recorded speeches, posters and chants full of emotion. We conducted interviews with around a hundred participants on the strikes, asking them about reasons for participation, desirable outcomes of the protest, perceptions of the issue, responsibility, and consequences of inaction. These observations and interviews, combined with in-depth interviews with key organizers of the strikes, gave us insights into the motivation and meaning-making processes of youth’s organizing and participating in the protests.

So, what made thousands of youngsters skip school and strike for the climate?

We found that the youth’s collective climate action seems to be related to a sense of shared responsibility and shared identity. By shared responsibility we mean that many of the participants pointed out that we are all to blame for climate change, and the focus should be on finding solutions rather than pointing out who is to blame. In past social movement research it has been pointed out that although research has shown that experiencing a situation as unfair can explain why people participate in protest, it might not explain why people participate in climate protests, because everyone is in part responsible for climate change. However, the participants we talked to did seem to think that their situation was unfair. They compared their situation now to what they would have in the future if climate change continues on its current course, and saw it as unfair that they would not get what people today and before them had already gotten. A sense of urgency was clear as they emphasised how little time there is to act before climate change destroys the future they want.

Our findings were extended when we later handed out a questionnaire to high school students in Oslo. Here we tested how the experiences the climate engaged youths talked about in the interviews were related. Because the participants talked about a shared responsibility, we tested how guilty they felt over how “we humans” are treating the planet instead of how guilty they felt over their own personal actions. We also tested how dangerous they thought humans’ treatment of the planet was to the planets’ future. Youths that felt guilty over humans’ treatment of the planet and found it threatening to the planets’ future were more likely to identify with the school striker movement. When they identified as school strikers they were more likely to think that youths together can influence politics by school strikes. We think all these factors, of shared responsibility, threat perceptions, group identity, and believing the group can achieve change can help explain what motivates climate change protests. Taken together, jointly identifying as the neglected youth seems to motivate a collective front to stand up for the future they want for the planet and their generations’ lives.

Psychology and the SDGs

With this research, we can see how the psychology of social identity, feeling as part of a group that will feel the consequences of climate change and nuancing the question of individual- vs. system- blame might help frame the issue towards a more problem-solving orientation. Unpacking youths' understandings of their own future and how that motivates for protest can influence more people to engage, organize, feel, and work towards a better future.

Collaboration across generations is needed in order to reach the SDG’s. Understanding how youth grief over their imagined futures and therefore protest can help to include them in the discussion on how to solve our ecological crisis.

Anja Duun Skauge and Christian Palacios Haugestad hold an MA in Psychology in health, development, and community psychology. Having specialized in cultural and community psychology, they are both interested in the interrelationship between individuals, their cultures, and society. In their joint master’s thesis, they explored the climate engagement of youth in the school strikes for climate #FridaysForFuture