Sustainable literature: Fiction and the mind

What does literature have to do with the Sustainable Development Goals (SDGs)? This question can be answered in many ways, and literary scholars can provide a wide range of different responses. Literary fiction often addresses the most pressing and current issues, and so, literature can, and does, tell a great variety of stories mirroring the problems that we face today. However, literature is not only about what it tells, but also about how it tells it. As is clear from debates on climate change or the range of topics discussed in the current US presidential campaign, how we communicate to the rest of the world certainly affects what we do. In this blog, I would like to focus on one specific way that literary fiction can contribute to achieving the SDGs, namely through exploring the workings of our minds. 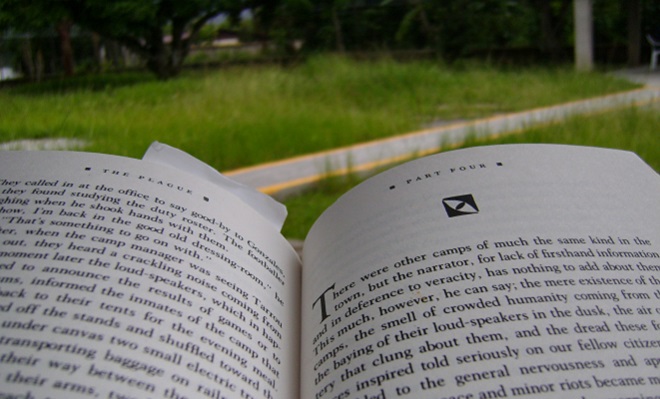 Mats Haraldsen was one of the recipients of the University of Oslo's Award for best Master's Thesis on Sustainability for his thesis which explored issues of the self and the individual's relationship to society from the perspective of cognitive science. Photo: Trevor Huxham/Flickr, CC BY-NC-ND 2.0

The individual and society

Literature has for a long time shown an interest in our mental mechanisms, and perhaps especially so in the 20th and 21st centuries. Modernist writers drew on Freudian insights to construct a form of literature that would be more in sync with the way they considered human cognition to work. Later, the post-modernist literature is often seen to mirror the fragmental and wandering nature of our minds. This literary interest in the workings of the mind is also reflected within the theoretical aspects of literary studies. In what is referred to as cognitive literary studies, literature is considered as being closely connected with the human mind. Not only the text itself, but also the effects it has on its readers as well as the process of creating it, are being investigated through new insights within different strains of cognitive science.

It is within such a framework that I have investigated how literature can conceive of ways that the individual can relate to society, without understanding this relationship in an individualistic and antagonistic manner. In my MA thesis, which received the University of Oslo’s Awards for best Master’s Thesis on Sustainability, I looked at novels by Miguel De Unamuno, Italo Calvino, and Albert Camus through the lenses of what has been termed second-generation cognitive science. This label refers to the rejection of the first generation’s conceptions of the human mind, especially to the idea of the mind as sort of computer. In this latter conception, the brain is seen as a computer which processes the data coming from the outside world, through the organs of the body, in the form of mental representations. In this conception then, the world and the body are considered as mere sources of data for where the actual thinking takes place; the computer-brain. Second-generation cognitive science, which has gained growing support over the last thirty years, rejects this idea. Human cognition is instead considered as an interconnected process involving not only the brain, but also the body, and its cultural and physical surroundings. Thus, we move from the computer-brain, to what philosophers Andy Clark and David Chalmers called the extended mind.

When we consider the novels of Unamuno, Calvino and Camus in light of this, new ways of thinking of the individual’s relationship to its surroundings emerge. In Unamuno’s novel San Manuel Bueno, martyr, we can see the beginnings of such thinking. The protagonist’s destructive religious search for a foundation of existence is opposed to the narrator’s appeal to rather construct meaning through taking part in the community of others. In Calvino’s novel The Baron in the Trees, we are given insight into the embodied foundation of our thinking. Calvino’s protagonist lives his entire life in the trees, constructing a rich and meaningful life there. In my analysis, this can be read as a portrayal of how the embodied interactions with the physical environment (in this case, the trees) constitute the foundation of the protagonist’s higher-level cognitive interactions. In Camus’ The Plague, which has been scaringly relevant the last six months, we are told how the inhabitants of the Algerian city of Oran battle a deadly plague. I have tried to show how this process can be read as an embodied coordination, happening without much use of words, thus pointing to the embodied nature of much of our social interactions. Through this mainly pre-reflective coordination, most of the inhabitants are drawn into a large-scale cooperation which takes on an autonomous nature. In all the three novels in question then, the common feature is how the mind is considered not as an independent entity, or computer-brain, but as highly dependent on its surroundings, be it physical or social. This fictional exploration of the interdependence of the human mind, seen from the perspective of second-generation cognitive science, may enable its readers to become more aware of the almost unlimited threads that connect our minds with our surroundings, both cultural, social and physical.

Paired with new insights from cognitive science, the novels of Unamuno, Calvino, and Camus seem to point to the destructive aspects of an individualistic conception of human existence, and to encourage us to see the countless connections between each individual and its surroundings.

Cognitive science and the SDGs

This, I suggest, is one of the possible ways that literature can be said to contribute to the SDGs. The what of the SDGs, such as clean water, greater economic equality or environmental issues, are of course much more pressing than our psychological mechanisms. However, in order to reach these goals, the how also has a crucial role to play. SDG 17 states: “Partnerships for the goals: Strengthen the means of implementation and revitalize the global partnership for sustainable development”. I suggest that literature and cognitive science together can make a small contribution to reach this goal. Paired with new insights from cognitive science, the novels of Unamuno, Calvino, and Camus seem to point to the destructive aspects of an individualistic conception of human existence, and to encourage us to see the countless connections between each individual and its surroundings. As many within cognitive science would agree, the stories we tell of ourselves are not simply a reconstruct of our experiences, they can change our cognition in fundamental ways. Thus, the stories we tell of our own cognition, through cultural products such as the novel, can play an important role in changing the way we understand the world and, consequently, how we act in it. The Sustainable Development Goals revolve around solving problems as a global community. In order to do this, we need to understand how others’ problems, in a fundamental way, are also our problems. The combination of cognitive science and literature can hopefully contribute to seeing more clearly this interconnectedness between us and the world we live in.