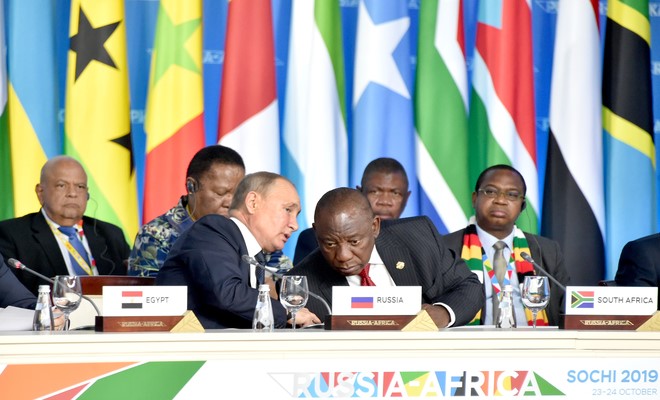 While there has been considerable attention on Beijing’s and New Delhi’s motives and growing interests, Russia’s footprint on the continent has received less attention. During its Cold War rivalry with the United States, the Soviet Union supported many African nations in the fight against colonialism and viewed them as fertile grounds for the advancement of socialism. Putin’s Russia has now begun to renew old Soviet partnerships. While in the recent past Russia has prioritized a deepening of military cooperation and trade links with selected African countries, it has now launched a major strategy to open “a new page” and make the whole continent a priority on its foreign policy. Some of this has direct implications for the impact of sustainable development strategies by African states.

The Sochi summit declaration highlights six areas of future cooperation – political affairs; security; trade and economic matters; legal affairs; scientific, technical, humanitarian and information exchange; and environmental protection. Unsurprisingly, most African leaders attending the summit extolled the added-value of yet another source of financing to meet developmental challenges back home. With a major increase in aid and investments from China (and to a lesser extent from India), many African states have, in recent years, mastered the art of “playing the field” of international aid – requesting support for different projects from a wide range of willing Western and non-Western donors. While Western aid is most often directed at improving education, health, gender and good governance, the Chinese have mainly provided infrastructure assistance through a combination of grants and concessional loans.

The international reaction thus far has been lukewarm and two main sets of arguments have emerged that advise African states to be extremely cautious as they become entangled in this rejuvenated relationship with Russia.

Is it all win-win?

The first set of arguments relate to fears of rising debts as African leaders are sold to the idea of using Russia’s national nuclear corporation to build expensive power plants that they cannot afford in the long-run. For many years, various stakeholders have been concerned over Africa’s growing debt to China (and future uncertainty associated with potential defaults), but now there are even greater concerns over the environmental and financial costs associated with Russian help to resolve the continent’s growing demand for electricity. While South Africa has expressed its inability, much to Russia’s displeasure, to commission a previously agreed power project, Egypt has already signed an agreement for a nuclear power plant while Rwanda, Ghana, Uganda and Nigeria have begun negotiations for similar projects.

The second concern relates to Russia’s own lack of democracy (and support for autocrats), which critics fear will weaken existing efforts to promote good governance in Africa. According to plans, a so-called Russia-Africa Partnership Forum will soon be established and annual political consultations will be held between the foreign ministers of Russia, African nations and the president of the African Union in order to foster greater political cooperation and support for multilateral cooperation. There are also plans to use NGOs and youth organizations to promote “people-to-people contacts” as well as to “coordinate efforts for international parliamentary events to arrive at decisions and resolutions that would benefit the Russian Federation and African states”.

Russia’s renewed interest in Africa has thus far been warmly welcomed by the African leaders who attended the Sochi summit. They, naturally enough, wish to attract greater investments to their shores. And Russian assistance may well end up complementing efforts by China and others to modernize and transform the continent’s energy sector, which in turn may help boost access to electricity and renewal forms of energy for large groups in the population who have thus far been excluded from the development process. But how African leaders address the above two sets of challenges will greatly determine the future impact of Russian assistance on sustainable development in Africa.