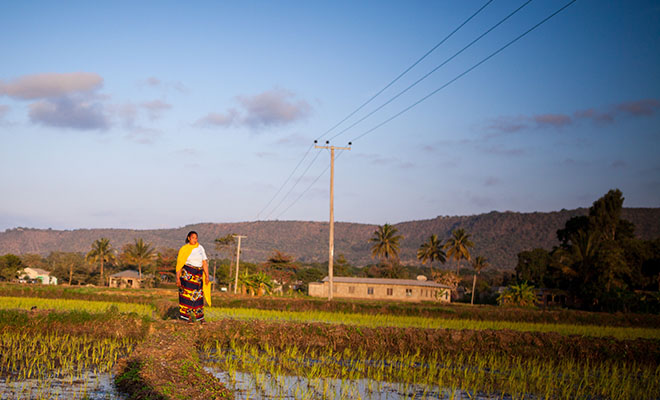 Access to electricity in Sub-Saharan Africa remains a major challenge for development. Photo: US Aid/Wikimedia commons

While 87 percent of the world’s population had access to electricity in 2016 (and increase from 78 percent in the year 2000), there is a sense of optimism in achieving SDG7 by 2020 as the proportion of people in least developed countries with access to electricity more than doubled between 2000 and 2016. However, a recent World Bank study finds that Sub-Saharan Africa has an access rate of 43 percent, which is not only well below the global access rate of 87 percent, but also much lower than in comparable regions of the world. And the 25 percent access rate in rural Africa remains a major challenge for development.

Most low-income countries are faced with a set of difficult choices in promoting energy security. Should one simply say yes to short-term and ad hoc measures (e.g introduction of diesel generators that require expensive fuel imports) when longer term solutions (building a power plant that can guarantee power for several decades) is not on the table? Attracting investments, particularly from actors with proven expertise, is not easy, especially when they come with unpalatable conditions and restrictions.

An illustrative example is a loan, which although may contain a concessional element, would nonetheless have to be repaid. Whether an investment worth several hundred million dollars or even a billion will pay off in the long-run is often difficult to ascertain with precision given the unpredictability associated with future demand, potential spillover effects in the economy and costs related to maintenance and expansion. Consequently, thorough homework in the form of impact assessments and feasibility studies must be undertaken by impartial actors and institutions. But even when such studies are available, the decision to choose among a list of alternatives may not be easy, particularly when such alternatives do not differ much from one another.

A particularly vexing problem for many countries relates to the environmental impacts of their investment decisions. In recent years, such challenges have come to the forefront in regard to coal-powered power plants. Although supporters claim that coal is the “cleanest least costly option”, critics wonder why Africa should construct such projects when coal is being phased out in large parts of the world. A proposal to build East Africa’s first coal-powered plant adjacent to the Lamu Archipelago in Kenya with a $2 billion Chinese loan is a good example in this context. While the Kenyan government claimed the project would strengthen energy security in addition to creating jobs and reducing poverty in the region, environmental activists and concerned citizens began a wave of protests citing the real threat of increased pollution, destruction of a UNESCO World Heritage Site and a 700 percent increase of Kenya’s annual emissions of greenhouse gases.

Kenya’s National Environmental Tribunal has recently decided to stop the project citing environmental concerns and a failure to adequately consult the public. The activists, who are celebrating their hard earned victory are demanding that their leaders should prioritize renewable sources of energy rather than coal-powered solutions. It is unclear to what extent the Kenyan government has other options available, particularly since two of the world’s most influential actors in the region – China and the United States – believe that coal is the best solution for addressing Kenya’s energy needs.