Leaving no one behind: Indian perspectives

I recently attended a fascinating national conclave on institutionalising the SDGs in New Delhi and was pleasantly surprised to find that several state governments in India are showing considerable interest in incorporating the SDGs in planning development projects and programs. But one of the most important debates at this event highlighted the challenges associated with a much-talked-about idea in the 2030 Agenda for sustainable development – “leave no one behind”. 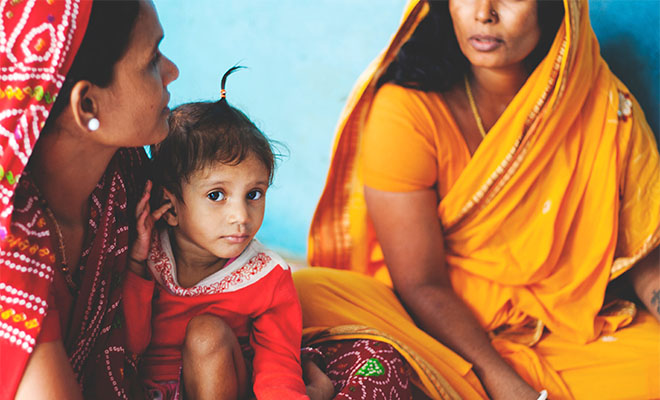 The idea that “no goal should be met unless it is met for everyone” is now well-established in the rhetoric around the SDGs and entails ensuring that every individual all over the world achieves the entire range of rights and opportunities articulated in the 2030 Agenda. Photo: Julie Johnson/Unsplash

Who is being left behind?

Among individuals and groups that are left behind in India (and the list is long) are Dalits (ethnic groups considered to be at the bottom of the caste hierarchy), Adivasis (indigenous groups), migrants, construction workers, domestic helps, manual scavengers, refugees, survivors of violence, displaced groups, single women, the homeless, people with disabilities and widows.

One of the very first issues that came up was a panellist questioning whether marginalised and minority groups were “ever with us”, and the extent to which the interests of these groups are currently represented in national forums and discussions. The civil society activist Suneeta Kar Dhar questioned the wisdom of placing women and children in the same category in official data collection and reporting which, she argued, tends to “infantilise” women’s problems and needs. Others highlighted the standard practice of treating the blind and deaf as passive “patients” that require benevolence and charity rather than viewing them as human beings and active agents shaping their own destinies. Still others claimed that in the absence of regular dialogues, marginalised groups in India are not just being “left behind” but actively “pushed behind”. It was argued that we must better understand the needs and demands of communities with diverse opinions, whose opinions are sometimes silenced rather than articulated, and that it is these “pushed behind” people that should lead work on the SDGs. Indeed, a common theme that emerged was that Indian civil society must more actively engage and leverage their experience in relation to the SDGs by ensuring that diverse groups in the population – for example women, people living with disabilities, transsexuals – are better represented in debates and discussions.

When minorities, such as transgender citizens, are “invisible” to officials, they do not get counted and are thus not included in planning and implementation of government programs. Many Indians continue to be discriminated against and ostracized due to their gender identities. For example, in the last Indian census (2011), transgender citizens (estimated to be between 500,000 – 2 million Indians) were placed in the “other” category and there has been no official surveys of the LGTB community in India. Nonetheless, according to the human rights activist Zainab Patel, there have been certain positive developments such as the landmark judgement by the Indian Supreme Court in 2014, which recognised transgender people as a third gender and directed the government to provide adequate access to this group to education, health, employment and other benefits. Of crucial importance, however, is the extent to which the national and state governments in India show interest and commitment to abide by this important judicial intervention.

Disability is not actively represented in the SDGs and hence an activist argued that the demand of people living with disabilities is often ignored in the national developmental discourse. According to Praveen Kumar Gurunath from VSO India, with little available data on Indians living with various types of disabilities, tracking challenges, opportunities and progress achieved has for long been a major challenge in India. And while disability is often correlated with poverty, access to some of India’s most ambitious social protection programs to people with disabilities is extremely limited. An illustrative example is the NREGA, which aims to provide at least 100 days of guaranteed wage employment in a financial year to every rural household whose adult members volunteer to do unskilled manual work. Apart from a few exceptions – such as the state governments of Andhra Pradesh and Tamil Nadu that have increasingly recognised and prioritised the needs of this group – progress in large parts of the country remain limited. A host of measures can be undertaken to promote access to services for people living with disability. These include financial inclusion (such as facilitating usage of ATM machines and issuing currency notes that help the blind to distinguish between various denominations), promoting the concept of inclusive schools (rather than separate “special schools”), training teachers to better address the needs of children with disabilities, building toilets suitable for those with wheelchairs, and improving access of health services that go beyond simply constructing ramps for wheelchair users.

The rapid economic growth rates achieved by India in the past few decades has been much celebrated in academic and political circles. At the same time, there has been a growing demand in sections of Indian society to revisit the basics of the current growth model amidst rising inequalities. The model for social security in India is mainly linked to formal jobs, and based on an employer-employee relationship. But there is growing informalization in the economy and the government must adopt newer models of social security. Thus, Dipa Sinha from Ambedkar University argued for an employment-centric growth model when she claimed that providing any type of work, leave alone decent work, is a challenge for the Indian state. The unemployment challenge is particularly acute for women, a large majority of whom continue to work in the informal sector (agricultural work, childcare, caring for elders and the disabled, fetching firewood, etc.) but whose efforts are not counted as “productive activity”.

The idea that “no goal should be met unless it is met for everyone” is now well-established in the rhetoric around the SDGs and entails ensuring that every individual all over the world achieves the entire range of rights and opportunities articulated in the 2030 Agenda. However, what this means in practice remains unclear and much of the recent discourse has highlighted the importance of political interest to promote minority rights and the lack of available data that create challenges in identifying, reaching and tracking the progress of those that are furthest behind. A 2017 report from the Overseas Development Institute argues that “progressive universalism”, i.e. prioritising and fast-tracking actions for the most marginalised people is crucial if the goal of not leaving anyone behind is to be realised. And if better-off groups are targeted first in public policies, the existing gap between them and the worst-off groups is likely to increase.