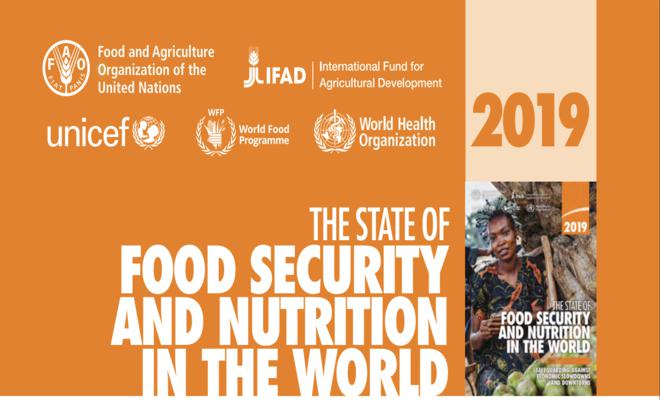 The State of Food Security and Nutrition in the World is an annual flagship report prepared by FAO, IFAD, UNICEF, WFP and WHO.

For the first time in its history, the SOFI report offers a glimpse of the problems of overweight and obesity, which continue to rise fast in all regions and is assuming epidemic proportions. Over two billion adults were estimated to be overweight in 2016 in addition to 131 million children aged 5-9. In Africa, obesity is rising at 6.2 % per year, while the corresponding figure for Asia is 7.5%.

As in previous years, the SOFI report documents the role of conflicts and climate variability on rising hunger, but this year the focus is also on how the “uneven pace of economic recovery in many countries after the 2008-2009 global economic downturn is also undermining efforts to end hunger and malnutrition”. Various types of inequalities – including those of income, gender, access to productive agricultural land, access to healthy and fresh food – are highly correlated with food insecurity.

Much of the discussion during the SOFI launch in New York focused on how our food systems have been broken and the fact that the societal costs of hunger are staggering. We must radically transform our local, national and international food systems into more sustainable, nutritious and efficient systems. For this to happen, we need good policies that support small-scale farmers and promote agri-food value chains that reward these farmers for their role in food production. A majority of those that are food insecure are rural inhabitants, and ironically, many are farmers themselves. In addition to boosting their incomes, we must better integrate them into the markets.

The enormous scale of world hunger requires us to update our approaches (making them bolder and involving multisectoral collaboration across different policy domains) and ensure that our interventions are better targeted both socially and geographically, taking into account inequality, conflict, gender, climate and economic slowdowns. The report urges the international community to undertake bolder actions and multisectoral collaboration to address the troubling trends