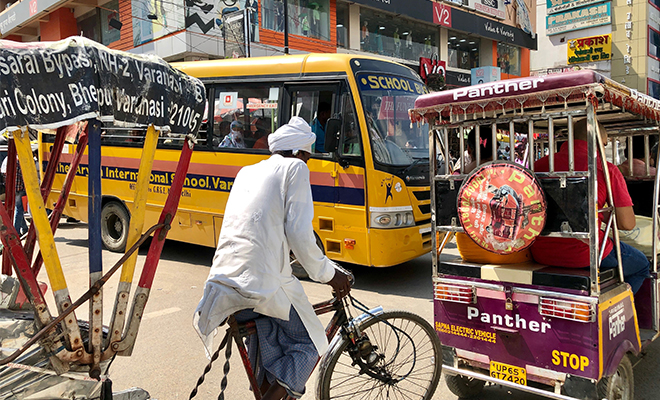 Varanasi is ranked the fourth most polluted city in the world, but the city is making efforts to combat water and air pollution. Photo: Dan Banik.

Although economic growth for 2019 is projected to be slightly lower than anticipated (6.2%), the Indian economy continues to be a force to reckon with. One of the country’s biggest achievements in recent years has been a drastic reduction in “multidimensional poverty” – defined in relation to not just income, but a range of deprivations that people face in their daily lives.

The latest global Multidimensional Poverty Index (MPI), which covers 101 countries and scrutinizes individual deprivations across 10 indicators in health, education and standard of living, finds that between 2005/06 and 2015/16, India has lifted 271 million people out of poverty. In achieving the fastest reduction in multidimensional poverty in the world during this period, the country significantly improved sanitation, nutrition and access to cooking fuel. However, poverty remains entrenched and India’s development success shows considerable regional variations. For example, while the state of Kerala typically tops measures of human development (literacy, access to healthcare, etc.), the four states of Bihar, Uttar Pradesh, Jharkhand and Madhya Pradesh, are home to 196 million people classified as living in multidimensional poverty.

With a rapidly growing urban population, India’s cities similarly display considerable variations. Highs levels of pollution remain a major challenge and 9 of the 10 most polluted cities in the world are in India. New Delhi, India’s capital, is a modern and well-planned city with beautiful avenues, parks and green spaces. While Delhi, currently ranked 6th most polluted in the world, has made incremental progress, I also had the chance to observe the on-going efforts to combat water and air pollution in the holy city of Varanasi. Ranked the fourth most polluted city in the world, Varanasi is trying hard to keep its narrow streets safe and clean. But the growth in vehicular traffic is not helping. However, the ban on plastics is helping somewhat in preventing further pollution of the famed Ganges river.

During this trip, I also visited Chandigarh – one of the earliest planned cities in post-independence India – designed by the famous architect Le Corbusier. Not only is the city green, its beautiful avenues are clean and traffic is very well regulated. I was particularly impressed by the bicycle lanes that the city administration has recently introduced – a feature I hope many other Indian cities will imitate.