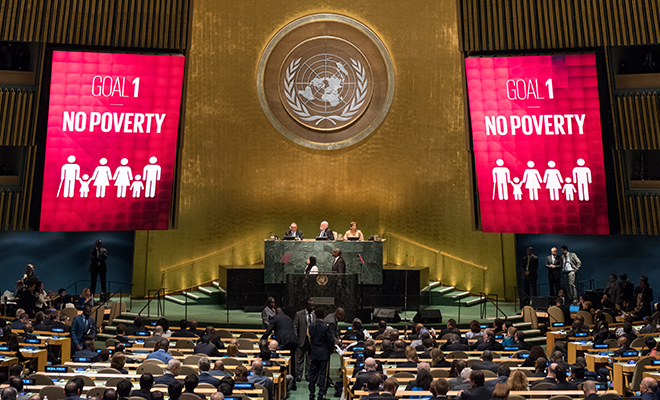 The goal of promoting sustainable development with an eye on the wellbeing of future generations appears illusory for many governments struggling to solve current problems of extreme poverty and deprivation within their borders. Photo: UN Photo/Cia Pak.

I have highlighted earlier that although there is growing awareness about the goals and the corresponding targets and indicators, the emerging consensus in most academic and policy discussions in 2018 was that the pace of action is slow and that far too many people of the world continue to be excluded from the development process. And apart from a few exceptions, governments all over the world are struggling to understand the SDGs and coordinate policies that promote both environmental and developmental outcomes. Moreover, most low-income country governments have been slow to allocate sufficient resources in domestic budgets for speedy implementation of the SDGs. Some of this is due to lack of sufficient revenue generation while in other cases it is due to a general political reluctance to fully engage with the 2030 Agenda. Even the governments of more affluent countries have been slow to react, often making symbolic pledges without undertaking measures to make significant changes to existing policy. In still other cases, the private sector – large parts of which have warmly embraced the SDGs – been become fond of making grand declarations of their intent to engage with the SDGs but have not followed up with evidence of their actual actions on the ground.

It is suffice to say that the SDGs have thus far not elicited the kind of enthusiasm among political leaders that is required for the success of such an ambitious agenda. In many countries, including large democracies such as India, there is an on-going and often polarized national debate on the extent to which the country should be prioritising “global goals” rather than goals that are more narrowly defined to apply to local situations (e.g. prioritising allocation of resources to selected regions and targeting selected groups in the population). Most politicians are consumed by the pressure to resolve numerous current problems and challenges and thus do not typically find it politically beneficial to engage in discussions of future problems that could affect a generation that is yet to be born. Similarly, many global policy recommendations often overlook issues of local justice and messy local political realities including competition between groups for control over scarce resources. Thus, the goal of promoting sustainable development today with an eye on the wellbeing of future generations appears illusory for many governments struggling to solve current problems of extreme poverty and deprivation within their borders. There must thus be a renewed focus on examining the process by which globally negotiated policies are adopted in national forums, and the post adoption effects of these policies.

Even when there is ample and reliable scientific evidence pointing to the urgent need for societal transformations required to address the harmful consequences of global warming, political response in large parts of the world is lukewarm. We really must try to better understand how such scientific evidence feeds into political decisions by asking a set of inter-related questions:

For the SDGs to make a difference on the ground, policymakers must acquire a better understanding on the global norm of goalsetting and balance how global targets link to national and local goals. And a wide range of societal actors must hold their leaders to account for actions as well as inactions. Moreover, I believe researchers must increasingly highlight what is working, where, how and why, in addition to better understanding how risk perceptions affect political decision-making and behavioral change. I am looking forward to studying some of these questions this year as part of an interdisciplinary and cross-faculty project at the University of Oslo.

One last thought: I hope 2019 will be a year when policymakers, business leaders, donors, NGOs and universities stop simply proclaiming the importance of the 2030 Agenda and begin to actually undertake concrete action. If we can move from the rhetoric and the celebratory speeches to actual evidence of operationalisation and success on the ground, 2019 will prove to be a very good year indeed.