Chapter in The Socialist Market Economy in Asia 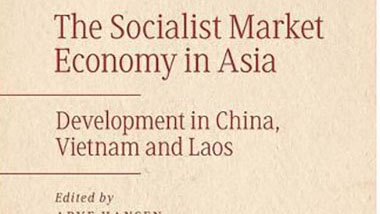 As part of the global shift of the world economy, the majority of the global consumer class will soon be East Asian. Interestingly, this involves the rather curious fact that a large proportion of consumers in the capitalist world economy will be living in nominally socialist countries. Of rather obvious reasons, China’s middle class—expected to become the largest in the world within a decade or two—has already attracted much attention. Vietnam’s middle class is now also being noticed, and has been estimated to be the fastest growing in Southeast Asia. The parallel growth of middle classes in the two neighbouring socialist states has however not been subject to comparative analysis, nor has the role they play in the vision of the so-called ‘socialist market economy’ been placed under closer scrutiny. This chapter sets out to fill this lacuna in the literature. The chapter launches the term ‘consumer socialism’ to capture developments in these two countries, and studies the socialist middle classes through the particular political-economic contexts that have fostered them as well as the consumption patterns that define them. It discusses the creation of consumer socialism, how middle-class lifestyles have gone from representing unwelcome bourgeois excess to become a defining part of developmental success, as well as how responsibility for the ‘right’ kind of consumption under market socialism has shifted from the state to the morality of consumers.