In Conflict, Security and Development, 2019. 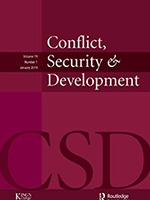 After Myanmar ended military rule in 2011, significant foreign investment arrived to facilitate a profitable transition to an integrated regional economy, and under the promise that foreign actors can help facilitate peaceful long-term development. However, these firms have also tacitly supported an ethnic cleansing committed by the government that most have partnered with or funded. This article builds theory on economic opening, development and conflict, using research from Myanmar to forward three arguments about business actions in fragile, at-risk countries. First, international-led regulatory reform has had little impact on endemic corruption at the micro- or meso-levels, as local elites and international businesses remain the primary beneficiaries. Second, ‘development’ is a contentious topic, defined locally not as broad societal growth but the unjustified picking of winners and losers in society by foreign entities. Third, business ventures are exacerbating ethnic tensions through a liberal peace-building mentality that is unresponsive to either local conflicts or local communities. The article closes by offering three ways that these findings open future research avenues on business engagement as peace-builders and development agents in developing yet fragile states.