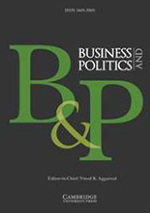 Scholarship in international political economy (IPE) has noted the rise of resource nationalism in since the early 2000s. Despite the increased presence of state regulation in the resource sector, resource nationalism has not been incompatible with foreign investment. This article contributes to better understand resource nationalist policies that emerged in recent years and offers new theoretical insights to explain state-IOC relations by integrating obsolescing bargaining theories and constructivist approaches.

Drawing on the case of Venezuela, this article explains how the Chávez regime pursued a hybrid model of control and welcoming of investments in the oil sector. The article argues that both bargaining insights and ideational considerations are important in explaining this model. In the context of high oil prices and sunk investments, it is unsurprising that a leftist government would seek to renegotiate contracts to seek better deals from extractive companies. Yet, focusing exclusively on those incentives misses important ideational drivers for the government to keep investors in the country. For Chávez's government, effecting changes in the oil policy was possible after waging an intense battle with its NOC, PDVSA, over control. Association with foreign investment became crucial to build its socialist model and to control its own company.