Antulio Rosales: China and the decaying of socialist rentierism in Venezuela: instability and the prevalence of non-interventionism

In Third World Thematics Special Issue: The Whereabouts of the State, 2018. 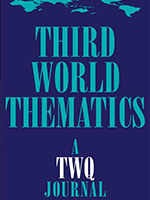 Over the last decade, Venezuela’s government turned to China’s state-owned enterprises and lending institutions as sources of financial support. As Venezuela’s rentier model of development became entrenched, it also became more dependent on China’s financial support. In this article, I analyse the recent evolution of this relationship and explain a change in attitude from China in recent years, when Venezuela faced a soaring economic crisis. The article argues that China’s response to Venezuela’s pursuit of financial support has been timid due to concerns around the stability of the Venezuelan regime, which put repayment of commodity-backed loans at risk. Instead of pushing for much-needed reforms to secure repayment, China’s behaviour remained cautious and loyal to the principle of non-interventionism. In turn, Venezuela has been unable to continue delaying an adjustment, which took place in the form of a drastic reduction in imports. China’s financial support bolstered an unfeasible rentier-state project. The decaying of Venezuela’s socialist rentierism has undermined its own capacity to extract crude and satisfy its commitments with foreign partners.