Desmond McNeill: Norway and REDD+ in Indonesia: The Art of Not Governing? 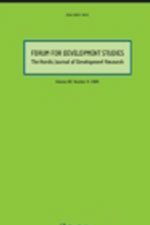 This article examines the dilemmas that Norway faces in seeking to secure good governance while minimising its role as a political actor. REDD+ (Reducing Emissions from Deforestation and forest Degradation in developing countries) is a global programme which seeks to create a financial value for the carbon stored in forests, offering incentives for developing countries to reduce emissions from forested lands. The ambitions and expectations of REDD+ are enormous, and it may be that these will never be successfully achieved. The first phase is so-called REDD-readiness which involves preparing REDD+ countries to implement the proposed programme. It is already clear that the governance challenges are daunting, at every level: global, national and local. Norway is playing a major role in REDD+, having pledged 0.5 billion US dollars per year to the programme. It has committed 1 billion US dollars to Indonesia alone, and there can be no doubt that it is now seen as a very important actor in the forest sector in that country. But Norway wields its power reluctantly and has adopted what it calls a ‘light touch’. While some commentators have questioned the efficacy of this approach, many in Indonesia apparently regard Norway as having taken an unduly active role. This article discusses whether REDD+ should be treated as aid, with conditions attached; sets out the options facing Norway; analyses the content of the Letter of Intent between the two countries and assesses Norway's actions: Do they govern too much or too little?