"Playing the Numbers Game:  Evidence-Based Advocacy and the Technocratic Narrowing of the Safe Motherhood Initiative" Published in Medical Anthropology Quarterly 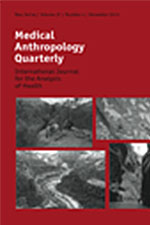 Based on an ethnography of the international Safe Motherhood Initiative (SMI), this article charts the rise of evidence-based advocacy (EBA), a term global-Level maternal health advocates have used to indicate the use of scientific evidence to bolster the SMI’s authority in the global health arena. EBA represents a shift in the SMI’s priorities and tactics over the past two decades, from a call to promote poor women’s health on the grounds of feminism and social justice (entailing broadscale action) to the enumeration of much more narrowly defined practices to avert maternal deaths whose outcomes and cost effectiveness can be measured and evaluated. Though linked to the growth of an audit- and business-oriented ethos, we draw from anthropological theory of global forms to argue that EBA—or “playing the numbers game”—profoundly affects nearly every facet of evidence production, bringing about ambivalent reactions and a contested technocratic narrowing of the SMI’s policy agenda.