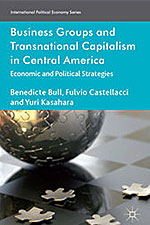 Business Groups and Transnational Capitalism in Central America investigates Central America's political economy through the lens of its powerful diversified business groups. It provides unique insight into their strategies when confronted with a globalized economy, their impact on development, and how they shape the political and economic institutions governing local varieties of capitalism. This study is based on the collection of data on sixty-nine of the largest groups from the six countries of the isthmus – Guatemala, El Salvador, Honduras, Costa Rica, Nicaragua and Panama – and combines qualitative and quantitative methods. It seeks to analyze historical trajectories of individual groups and their evolution in distinct national contexts as well as their contributions to innovation and exports. The analysis shows that the business groups have formed alliances with multinational companies (MNCs), but are not in the process of being absorbed by them. Rather they shift sector focus and exploit their networks in order to face competition from MNCs.