Chao Zhou and Dan Banik: Access to Justice and Social Unrest in China's Countryside: Disputes on Land Acquisition and Compensation

Published in Hague Journal on the Rule of Law 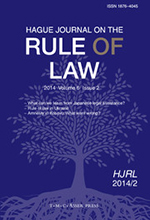 A major challenge for China is the frequency of so-called ‘mass incidents’ or protests that have been on the rise in recent years. Many such incidents are the result of forced expropriation of farmland by local government authorities for a wide variety of purposes, including the goal of industrialization of the economy. This article examines the challenges faced by rural citizens to access formal systems of justice while seeking a legal remedy. Why are formal systems of justice not effective in settling disputes on land expropriation in China? What are the obstacles faced by landless farmers in accessing justice, and how can such obstacles be overcome? We examine existing regulations for settling compensation disputes in China and discuss several concrete examples from the field in order to identify numerous institutional challenges. These include a very demanding applicant requirement, ambiguous provisions such as no time limit for compulsory mediation, and the inability of the petitions system to address land dispute cases. We argue that the adjudication system itself is an obstacle for farmers who wish to seek an administrative or legal remedy. The political, administrative and judicial authorities in China prefer the maintenance of strict and specific norms rather than facilitating more adaptable and feasible alternatives. Without a major overhaul of current dispute settlement mechanisms, the number and frequency of severe social conflicts between farmers and local governments will continue to increase. Major reforms are required to better protect the rights of landless farmers and other citizens whose properties have been expropriated.

Read more about the article on the Publishers web site.