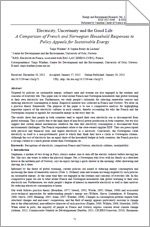 Targeted by policies on sustainable energy, ordinary men and women are also engaged in the routines and concerns of everyday life. This paper asks to what extent French and Norwegian households link global warming to their own electricity use. Furthermore, we study people’s rationales for selecting renewable sources and reducing electricity consumption at home. Empirical material was collected in France and Norway. We draw on a practice theory framework. The purpose of the paper is to use a comparative analysis for highlighting important aspects of the electricity cultures in each country, thereby accounting for why the French and the Norwegians respond to appeals for sustainable energy in the ways they do.

The results show that people in both countries tend to regard their own electricity use as disconnected from global warming. This is partly due to the high share of non-fossil power production in both countries, but we also suggest that certain denial mechanisms reinforce the idea that electricity consumption is disconnected from environmental challenges. The French respondents relate to the state-owned supplier EDF. They are preoccupied with physical and financial risks and regard electricity as a necessity. Conversely, the Norwegians value electricity in itself as a non-problematic good to which they think they have a claim as Norwegian citizens. Although the cost of electricity has an equal share of the household budget in both countries, the French practice a savings culture to a much greater extent than Norwegians do.