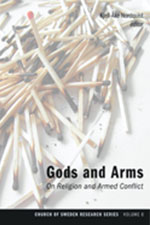 This book brings together a variety of perspectives on how religion can be related to violence and war - both in a destructive and constructive way. Religion can justify and mobilize violence - even terrorism or guerilla wars - just like political ideology. But how is such a link between religion and violent behavior established in the first place? How can we go further in understanding this possible connection between religion and war? Is religious peace work just the flip side of religious support of war? Or can peace work be informed by knowing about how religion promotes violence and war? In the search for answers to the puzzle of religion and war, it is easy to focus on conflict and war situations, but maybe there is as much to learn from peace work as from war studies? Therefore, this book also analyses religious peace work from different contexts. The multifaceted presence of religion in conflict situations - whether justifying violence or promoting peace - is illustrated in this book using a variety of situations, in an enlightening panorama of one of today's must puzzling social connections: religion and armed conflict.

Contributors Preface 1 Religion, Fundamentalism, and Conflict - R. Scott Appleby 2 Religion in the Global Jihadi War - Mark Juergensmeyer 3 Apocalyptic Speculations and the War of Armageddon - Goran Gunner 4 "It Was the Work of Satan": Perpetrators Rationalize the Atrocities of the Rwanda Genocide - Anne N. Kubai 5 In Search of Grace: Religion and the ELN - Jennifer Schirmer 6 Religion, Conflict, and Peace-Building: The Case of Sri Lanka - Mariyahl Hoole, Nari Senanayake, and Jehan Perera 7 "Peacemakers" from the "Bridge Church": The Anglican Church as A Third Party in Palestine 1920-1948 - Maria Smaberg 8 Linking War and Religion: Some Observations - Kjell-Ake Nordquist