The politics of epidemic response and the privatization of global health security: The global Emergency Medical Teams initiative

Since the Ebola crisis of 2014-2015 - and particularily in response to the COVID-19 pandemic - NGOs, private companies and militaries are increasingly involved in epidemic preparedness and response efforts. With what consequences for the politics and practices of global health security? 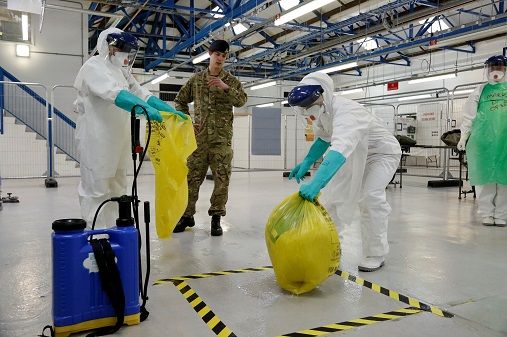 Health workers receiving training on waste disposal in the UK, under the supervision of the military. Flickr: DFID-UK

The Emergency Medical Teams initiative, spearheaded by the World Health Organization (WHO), is an innovative governance arrangement that brings together a wide range of public and private actors as one ‘global health reserve army’ to respond to epidemics and humanitarian emergencies.

But how does cooperation between civil protection, military, charity and for-profit response teams play out in practice, both in the governance of the initiative and operationally?

If pandemic preparedness and response has traditionally been understood as a prerogative of the nation state, growing evidence suggests a certain ‘retreat of the state’ and an increasing reliance on private capacity (whether for-profit and not-for profit) to deal with epidemics.

This PhD project takes the Emergency Medical Teams initiative as a case-study to analyze new forms of cooperation in global health security: between public and private entities, across sectors, and not least, increasingly global.

This doctoral project’s main objective is to critically analyze the consequences of new forms of global, public-private and cross-sectoral collaborations for the politics of epidemic response, taking the case of the WHO Emergency Medical Teams initiative. More specifically, I will analyze the following research questions:

The project is financed by a personal PhD Fellowship (2019-2023) from the Centre from Development and the Environment, University of Oslo awarded to Antoine de Bengy Puyvallée.