The doctoral thesis The Wall in Our Minds: Negotiating Heritage and Identity in Post-war Dubrovnik explores how the production of Dubrovnik’s heritage, and its World Heritage, intersects with the reconstruction and consolidation of identities and locality after the Croatian war of independence (1991-1995). 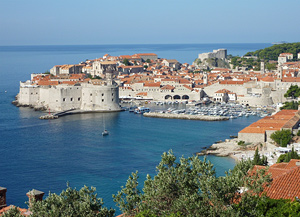 Celine Motzfeldt Loades’ doctoral thesis analyses how Dubrovnik’s inhabitants negotiate and produce the city’s cultural heritage in a post-war context, under the conditions of global market economy and mass tourism. The author analyses the driving-forces, consequences and responses to ‘place branding’ and commodification processes of Dubrovnik’s UNESCO enlisted walled centre. Focusing on different localities and areas of social life, the ethnographic case study explores how heritage is steered and contested by different interest groups for commercial, political, ideological and cultural ends. The thesis discusses how cultural memory, different uses and perceptions of the past can provoke both dissonance and unity, shape practices and mobilize cultural and political activism.

Informed by theoretical frameworks of critical heritage studies and practice theory, the thesis argues that ‘heritage value’ does not ‘reside’ within the selected heritage, but can be seen as a process, which is socially constituted, produced and continually negotiated in the interfaces of shifting spatial and temporal relations. This ethnographic case study highlights that historical processes and events occurring in the last quarter of a century have produced new conditions for communal interactions, practices, cultural representations and meaning making.

Recent historical processes have configured the conditions for identity production and contributed towards changing the perceptions and uses of the city’s World Heritage. The shelling of Dubrovnik during the Croatian war of independence caused huge material damage to Dubrovnik’s World Heritage site. Not only did the war have long-lasting consequences for heritage restoration, it also had an enduring influence on the interpretations and uses of Dubrovnik’s World Heritage in identity consolidation. The fact that the war occurred concurrently with the economic transition from Titoist communism to a global, capitalist market economy, further intensified the use of heritage as an economic resource in post-war restoration and tourism development.

Motzfeldt Loades’ examines how Dubrovnik’s cultural heritage is used to consolidate geo-political orientation and ideological discourse by bolstering Dubrovnik’s (and Croatia’s) desired cultural and political belonging to Western-Europe, and subsequent detachment from the Balkan region. The thesis explores how the perceived cultural and political heritage of the Dubrovnik Republic (1358-1808), is used in local political discourse to re-negotiate Dubrovnik’s politically peripheral position within the Croatian nation-state and re-construct centrality and within the parameters of the new nation-state. The locally perceived political heritage of Dubrovnik Republic (embedded in a discourse of having long-standing international diplomatic skills and an ability to sustain its freedom - libertas), is also central to the symbolism of political stability and amenability within the context of Croatia’s post-war identity within the EU.