This project looks at Vietnam’s development strategies and the ongoing socio-economic transformations in the country through a case study of the emerging transition from motorbikes to cars in Hanoi. 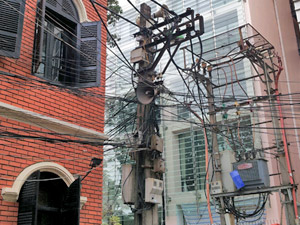 Vietnam is widely regarded as a "development success story" and an emerging economy. Since the economic reforms known Doi Moi (“renovation”) the country has achieved rapid economic development and poverty reduction, and moved from a communist planned economy to a “market economy with socialist orientation”.  The rapid development and transition to capitalism naturally also brings about many challenges, among them urbanisation. Even though Vietnam for a long time controlled urbanisation through a strict regime of residence certificates (similar to the Ho Cau system in China), the government has recently moved towards an approach of embracing urbanisation as necessary for further growth, along with the dominant view among the international development policy establishment.

As a trend towards private car ownership is emerging, the mobility in large cities is fundamentally challenged, and probably nowhere more than in Hanoi. Recent studies find that the high population densities and sparse road networks in the capital is incompatible with adoption of private cars as a major means of transport. At the same time, planned expansions of the minimal public transport system are slow, and are unlikely to reach the majority of citizens.

This study will add to a small but growing body of research on consumption practices in emerging economies, and will broadly speaking provide insights on the close and complex relationship between consumption and development.

The project will approach car consumption holistically, focusing on economic, social and cultural determinants of consumption in the context of Vietnam’s socio-economic development. This includes looking at the symbolic and performative values of the car, the political economy of the car in Vietnam, the dialectical relationship between the car and urban geography, and the material agency of the car in determining other consumption practices. In addition, the project will consider overall development goals and processes in Vietnam, as well as the direct role of the government in facilitating transport choices. This will be grounded in a consideration of Vietnam’s transition towards a capitalist consumer society, and in this way the private car will serve as entry point to analysing the transitioning consumer culture in the country.

The project will consider questions such as:

Centre for Development and the Environment (SUM), University of Oslo.