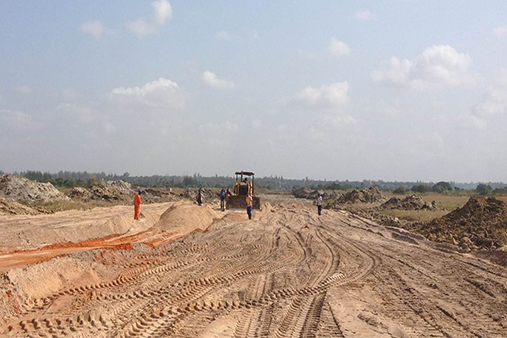 A road project in Maputo, financed and constructed by China. Photo: Ulrikke Wethal

Although China has been aid donor since the 1950s, the country's impressive growth and increasing importance globally over the past decades have attracted much international attention. This applies particularly to China's activities in Africa, both in trade, investment and aid. China is now one of Africa's largest trading partners and export markets, and has obtained increasing diplomatic and economic influence on the continent. The area that receives most Chinese aid is projects in physical infrastructure, where Chinese companies are tied in to control and perform the actual work. China in many ways unique in how they actively involve and cooperate with their own construction sector in the implementation of its Africa policy, which has led to Chinese companies establishing themselves on the continent, working on projects outside the aid structure.

China's aid to Africa has been extensively debated. The model China uses for south-south cooperation differs from traditional strategies for development assistance, making it difficult to compare it with the OECD-DAC model. Speculations about the Chinese agenda and the "real" motives for operating in Africa have been central in the discussion about China’s role in recent years. Furthermore, the bulk of research on China-Africa relations bases its analyses on macro-data of trade, investments and aid flows, and few studies have been qualitatively oriented and fieldwork-based.

This study will do a qualitative analysis of the receiving end of Chinese projects, focusing on how the projects stimulate local employment and industrialization. China has previously been criticized for importing Chinese goods, services and labour to their overseas projects, thus preventing extended effects that may contribute to the recipient country's own industrialization and development. This study seeks to identify when Chinese construction companies creating local economic links in the recipient country, and when they choose to bypass local industry and labour.

Data will be collected through fieldwork in Mozambique, where the Chinese have been particularly active in the construction of infrastructure. The government has welcomed Chinese involvement in Mozambique infrastructure, especially since much of its physical infrastructure was destroyed during the civil war ending in 1992. Mozambique also serves as an interesting case because the country does not fall into the "typical" range of oil-producing countries that play a central role in China's current global interests.

Key questions: What characterizes the economic links Chinese construction projects create with the local economy? How are these embedded in the Mozambican socio-economic context? How do Mozambican stakeholders use their bargaining power to influence the establishment of such links? And to what extent this differs between development projects and commercial projects?

Centre for Development and the Environment (SUM).