We congratulate Sidsel Roalkvam, Tanja Winther and Mariel Aguilar-Støen with their professorship promotion. 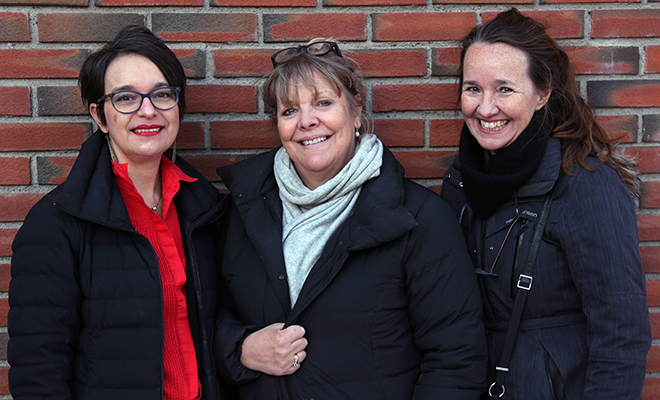 ​Sidsel Roalkvam is promoted to Professor of Anthropology. The committee writes in the competence statement that:

Roalkvams's work is of high quality, and provides original and insightful contributions to anthropology, both ethnographically and theoretically.

In addition, her range of fieldworks is impressively broad (Kiribati, Zimbabwe, South Africa, India); and her publications anchored in fieldwork reveals precious skills of depth in her participant observations.

Today, Roalkvam is Centre Director at SUM, and has been employed at UiO since the completion of her Ph.D. in 1997.

Her research interests spans from Global Health, Maternal and Child Health and HIV and AIDS, to Crisis, Community Capacity, Religion and Illness, and Gender. She has previously been Academic Director of the Livelihoods interdisciplinary program (LEVE) at UiO.

For several years, Roalkvam led the research group on global health at SUM, and she played a significant role in the work with of The Lancet-University of Oslo Commission on the Global Governance for Health.

Professor of Development and Environment

Tanja Winther is promoted to Professor of Development and Environment. In the competence statement, the committee writes:

Winther has made a significant contribution as quite a pioneer inside a new interdisciplinary field, the social science of energy technology.

More recently she has led several creative and experimental interventions aimed at understanding ways to promote energy efficiency and conservation at the household level in developed countries. Her research has been methodologically innovative and consistently focused on providing practical results based on contemporary theory of social science.

Winther completed her PhD in social anthropology at UiO in 2005 and has been employed at SUM since 2006. She has also received a university degree (siv.ing. at NTNU) in power engineering, and training in business administration (BI).

In her research, Winther has been particularly concerned with energy systems and social aspects of technologies. Her fieldwork is from Tanzania (Zanzibar), Kenya, India, Malawi and Norway.

She is currently leading the research group Sustainable Consumption and Energy Equity at SUM, in addition to a larger application for the establishment of a research center for eco-friendly energy (FME Samfunn) at SUM, UiO.

Her articles present strong empirical material, with extensive local level fieldwork in several countries, carefully drawing on multiple methods to provide in-depth understanding of change. Her articles are high quality, both empirically and analytically, clearly contributing to the field of geography.

Her findings are relevant beyond her case study sites and in several articles she develops analytical frameworks that will also be useful for other investigations into the complexity of such multi-scalar political processes.

Since completing her doctoral degree at NMBU in 2009, Aguilar-Støen has been employed at SUM. She has extensive experience in international collaboration and has, in her research, been particularly concerned with migration, rural change and environmental policy. She has done fieldwork in Latin America, for instance in Mexico, Guatemala and Nicaragua.

She leads the research group Rural Transformations in The New Century at SUM, as well as SUM's Research School.