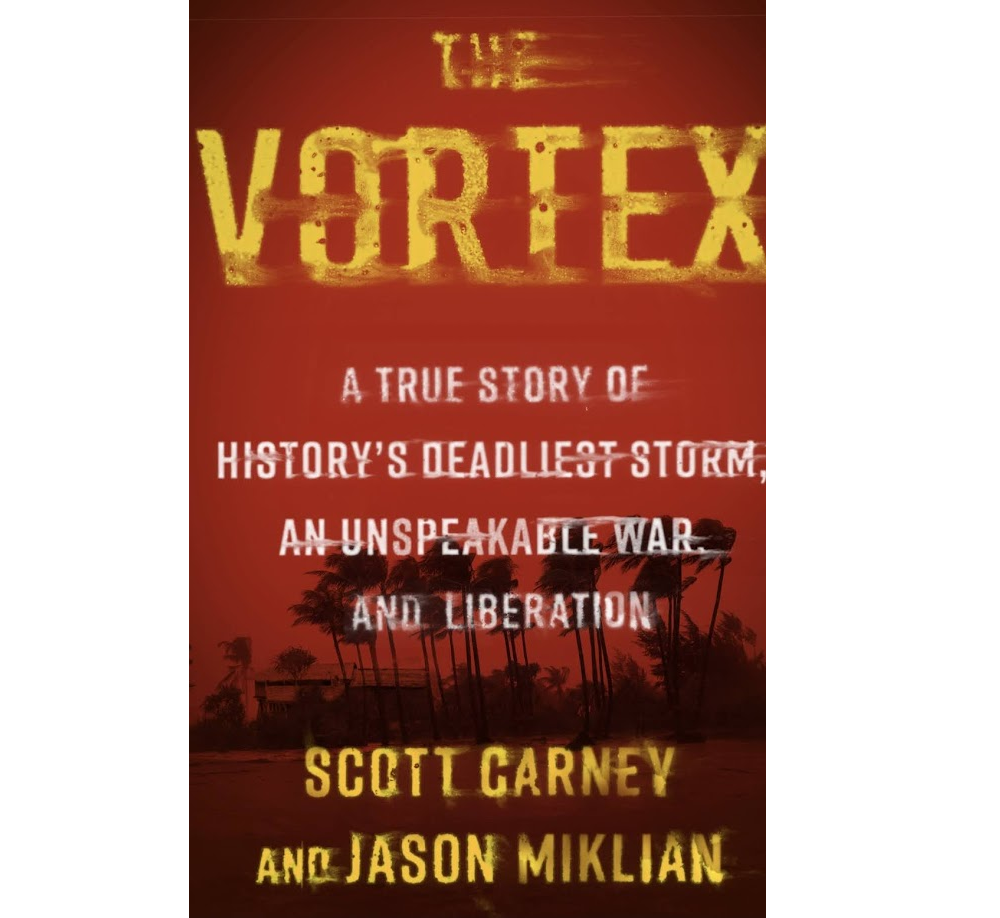 In November 1970, a storm set a collision course with the most densely populated coastline on Earth. Over the course of just a few hours, the Great Bhola Cyclone would kill 500,000 people and begin a chain reaction of turmoil, genocide, and war. The Vortex is the dramatic story of how that storm sparked a country to revolution.

Bhola made landfall during a fragile time, when Pakistan was on the brink of a historic election. The fallout ignited a conflagration of political intrigue, corruption, violence, idealism, and bravery that played out in the lives of tens of millions of Bangladeshis. Authors Scott Carney and Jason Miklian take us deep into the story of the cyclone and its aftermath, told through the eyes of the men and women who lived through it, including the infamous president of Pakistan, General Yahya Khan, and his close friend Richard Nixon; American expats Jon and Candy Rhode; soccer star-turned-soldier Hafiz Uddin Ahmad; and a young Bengali revolutionary, Mohammed Hai.

Thrillingly paced and written with incredible detail, The Vortex is not just a story about the painful birth of a new nation but also a universal tale of resilience and liberation in the face of climate emergency that affects every single person on the planet.

The authors will discuss the book and their motivations for writing it (including raising awareness of Bangladesh's significant geo-political role in history and unpacking the climate-conflict nexus), followed by a discussion led by Arild Engelsen Ruud and Q&A session.

Scott Carney is an investigative journalist and anthropologist, as well as the author of the New York Times bestseller What Doesn’t Kill Us. He spent six years living in South Asia as a contributing editor for WIRED and writer for Mother Jones, NPR, Discover Magazine, Fast Company, Men’s Journal, and many other publications. His other books include The Red Market, The Enlightenment Trap and The Wedge. He is the founder of Foxtopus Ink, a Denver-based media company.

Jason Miklian, Ph.D., is a Senior Researcher at the Centre for Development and Environment, University of Oslo. Miklian has published over 60 academic and policy works on issues of conflict and crisis, based on extensive fieldwork in Bangladesh, Colombia, India, and the Congo. He serves on the United Nations Expert Panel on Business and Human Rights, has won several awards for his academic publications, and serves as an expert resource for various government knowledge banks in the US, UK, EU and Norway. Miklian has also written for or been cited in an expert capacity by the New York Times, BBC, The Economist, Washington Post, Financial Times, France 24, The Guardian, The Hindu (India) and NPR.

Arild Engelsen Ruud is professor of South Asia Studies at the University of Oslo.