Sloan Wilson is a distinguished professor of evolutionary sciences and anthropology at SUNY / Binghamton University, and America's leading evolutionary biologist. 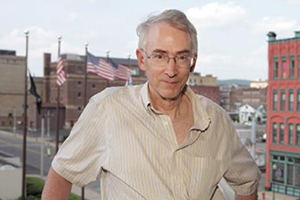 For the past two decades he has worked on the role of cooperation and altruism in human evolution, and he is currently engaged in a project involving a cultural-evolutionary study of the ‘Norwegian model’. His latest book, Altruism, will be published in Norwegian in 2015.

David Sloan Wilson studies evolution in the same way that Darwin did – as a theory that applies to all aspects of humanity in addition to the biological world. He has made foundational contributions to evolutionary theory on topics such as multilevel selection and the nature of individual differences. There are many points of connection between Wilson’s research and Arne Naess’s work on peace, justice and the environment. Wilson's research on humans examines topics as diverse as altruism and fairness, decision-making, religion, economics, and business.

His books include, among others: