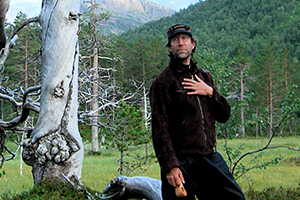 “Speculative, learned, and always ‘lucid and precise’ as the eye of the vulture that confronted him once on a cliff ledge, Abram has one of those rare minds which, like the mind of a musician or a great mathematician, fuses dreaminess with smarts.”

David Abram, cultural ecologist and philosopher, is the author of Becoming Animal: An Earthly Cosmology (Pantheon, 2010), and The Spell of the Sensuous: Perception and Language in a More-than-Human World (Vintage, 1997). Hailed as "revolutionary" by the Los Angeles Times, as “daring” and “truly original” by Science, David’s work has helped catalyze the emergence of several new disciplines, including the fields of ecopsychology and ecolinguistics. His essays on the cultural causes and consequences of environmental disarray are published in numerous magazines, scholarly journals, and anthologies.  A recipient of the international Lannan Literary Award, as well as fellowships from the Watson and Rockefeller Foundations, in 2014 David will hold the Arne Naess Chair in Global Justice and the Environment at the University of Oslo. Director of the Alliance for Wild Ethics (AWE), he lives with his family in the foothills of the southern Rockies.