The SDGs and the researcher: How to engage in practice?

Researchers can often appear as too negative when discussing the Sustainable Development Goals. To join the discussion, I recommend what I call critical engagement. 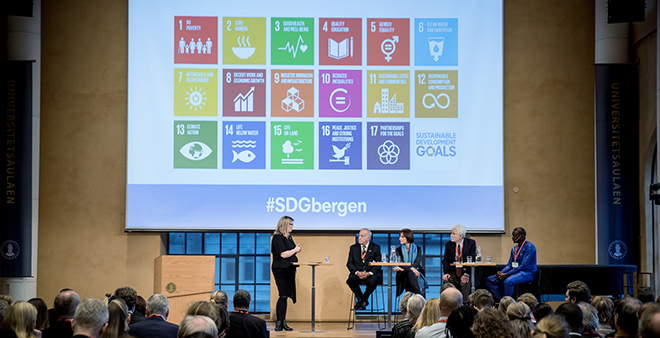 How can researchers engage with policy-makers effectively in dialogues about the SDGs? Photo: Eivind Senneset for the University of Bergen.

Not all researchers want to – or, in my view, need to – get involved in policy. For those that do, there are two principles which I recommend:

Complex and “critical” approaches can be a hindrance

As a researcher at a university, I believe it is a privilege – and also a responsibility – to adopt a critical approach to all that I study. This does not mean criticising what people do, but rather questioning all arguments, assumptions and empirical claims.

I also find that I suffer from the tendency that most researchers have - to wallow in complexity. As researchers we may find it tempting – or even necessary - to create new and more complex concepts, and models, to analyse the phenomena in which we are interested. In order to be published in a top academic journal, innovative research is required. This does not tend to reward simplicity. Quite the reverse.

These two factors can be a hindrance for researchers to engage with policy-makers effectively. This is particularly unfortunate when the aim of the policy concerned is self-evidently laudable – as in the case of the Sustainable Development Goals (SDGs). Here, researchers can easily appear to be playing a very negative role.

What is to be done in this situation? How can the researcher avoid being unconstructive?

Join the discussion through critical engagement

Engagement indicates that the researcher does indeed seek to relate to the real world and not sit undisturbed, and undisturbing, in an ivory tower.

Be critical, not cynical

It does not mean criticising what people do. Unfortunately – but very understandably – we nevertheless often seem to be doing just that. We appear to be not simply questioning, but skeptical and even cynical.

My response to this challenge is not to blunt my critical faculties, but to try to communicate to those who may feel criticised the constructive role that I am trying to play. To argue that there is such a thing as constructive criticism. But I recognise that this is not easy.

Research on the SDGs

I am currently involved in a major research project on the SDGs where I am faced with precisely these dilemmas. The study consists of a dozen case studies by international researchers, providing a systematic comparison across (most of) the SDGs.

Our purpose in this study is certainly not to ridicule or reject the SDGs. We want to better understand them – as an extremely significant phenomenon. How they came about, how they were shaped, how they may be reshaped, what they may achieve, and so on. And we would like our work to contribute to their better serving their intended purpose.

The underlying premise of the study is that global goals are a terrain of contestation, with different actors competing for their interests and ideas. They attempt to exert influence by ensuring that the goals are formulated and measured in ways that frame discourses that favour their agendas.

In my own contribution to the research, I have drawn on relevant theory from my own field of expertise – global governance – referring, for example, to neo-Gramscian theory on framing, and on social constructivism. But I keep this more academic, esoteric part to a minimum – focusing rather on key insights such as how  ‘micro-politics’ can play out when apparently technical decisions are influenced by powerful interests.

I have just retired – or semi-retired – from 25 years at the Centre for Development and the Environment (SUM) at the University of Oslo. SUM’s mandate is to conduct interdisciplinary research and teaching of high quality – but also to engage actively with policy-makers, for example through the recently launched Oslo SDG Initiative.

This dual task is extremely interesting – but also challenging. Researchers who want to engage with policy-makers may have to resist the attraction of complexity, while still displaying their valuable constructive and critical faculties.

By Desmond McNeill
E-mail this page