Ebola: A humanitarian emergency that became a security threat

Should aid serve purposes other than ‘doing good’? 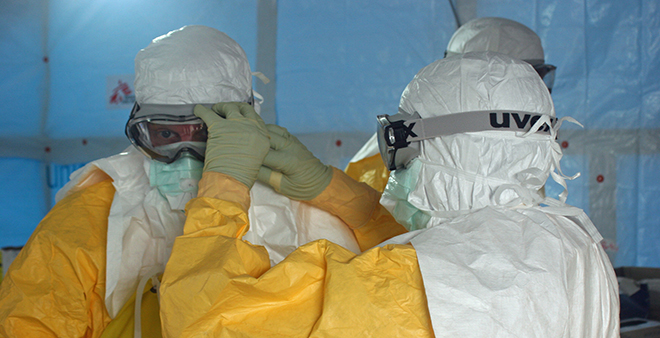 This blog post has also been published as an article on sum.uio.no, Forskning.no and Bistandsaktuelt.no

The Norwegian government understood the Ebola epidemic both as a humanitarian crisis and as a security threat. In my recent master thesis on the Ebola crisis, I argue that bringing a security dimension to the crisis had clear consequences. It allowed the government to mobilize more resources, in a more flexible way, but also made it heavy-handed, expensive and less effective. Moreover, the coupling of humanitarian and security motives raises the general question: Should aid serve purposes other than ‘doing good’?

The Ebola epidemic of 2014-2015 killed over 11,000 people, 99.9% of which lived in three West-African countries: Guinea, Liberia and Sierra Leone. In my master thesis, I explored the policy process that led Norway to set-up a response to help these countries fight the disease.

One event played a critical role to Norway’s engagement in the crisis: the infection of a Norwegian health worker by Ebola. In the newspapers, we could witness spectacular images of her journey back to Norway and admission to the main hospital of Oslo. Under public and media pressure, the government quadrupled in a week its contribution to stop the Ebola crisis, raising from NOK 80 million before she felt sick to NOK 330 million after her return to Norway.

The government’s response to Ebola was set-up both to satisfy the public’s demand to “do something” against the ongoing tragedy in West Africa and to contain the spread of the epidemic – i.e., protect Norway. As concluded by the Norwegian Directorate of Health in its report on the Ebola crisis, “The motivations for the Norwegian contribution were thus both humanitarian and selfish” (1).

The consequences of framing the Ebola crisis as a security threat

The return of the Ebola infected health worker raised fears in the Norwegian public opinion and led the Ministry of Health to perceive the epidemic as a potential a public health crisis. Therefore, the government’s response – or at least parts of it – was set-up as a mean to ensure Norway’s health security. In academic terms, this corresponds to a partial securitization of the response. I found at least four consequences to it.

Norway dedicated NOK 500 million to the international efforts against Ebola. This is a colossal amount, particularly when compared to the two largest contributions to humanitarian crises of the last decade – the earthquakes in Haiti (2010) and Nepal (2015). The Norwegian government pledged for each around NOK 200 million, less than half of the Ebola response.

Traditionally, the Norwegian government relies heavily on International Organizations and NGOs for its humanitarian policy. Ebola constitutes an exception as almost a third of the response’s budget was allocated to two projects directly led with public resources: a field hospital in Moyamba, Sierra Leone, and a vaccination trial in Guinea.

Both these projects were innovative – and thus riskier: it was the first time Norway sent public health personnel to fight an epidemic abroad; and the vaccination trial design was atypical, only used in the latest stages of the smallpox eradication campaign in the 1970s.

Half of the response budget (NOK 250 million) was allocated within one week. This tight schedule, combined with the media and public interest as well as worrisome epidemiological predictions (the US Center for Disease Control (CDC) forecasted over one million cases three months later) created an atmosphere of crisis.

The urgency to allocate funds gave the governmental administration a lot of flexibility. The vaccination trial was for instance described as being on the “fast track” by the Ministry of Foreign Affairs, being funded extremely fast and starting only a few months after being approved (when it usually takes a couple of years).

Consequence #4: Legitimizing the use of military resources

Finally, the security context surrounding Ebola legitimized the mobilization of military resources for setting-up the field hospital in Sierra Leone. The Norwegian army was asked to help transporting material with a transport aircraft; whilst the British armed forces contributed largely to the logistic of the UK-led response in Sierra Leone to which Norway participated. Military resources were then used in support to a civilian-led operation, but the army can also be involved to a much larger degree. For instance, the US-army led the humanitarian response in Liberia and deployed 3,000 soldiers.

If framing Ebola as a security threat legitimized the mobilization of large resources with an uncommon flexibility, I suggest that it also influenced negatively the operationalization of the response and raises ethical questions on the finality of aid.

Security concerns were on top of the government’s list when setting-up the field hospital in Sierra Leone. It was critical not to get any health worker infected, and at least having good evacuation system and treatment capacity in Norway – which was demonstrated by the recovery of the sick volunteer.

The security requirements led to implement a “heavy handed” intervention, as a source put it. Health workers were not allowed to go outside of the treatment facility and the base camp, both being surrounded by fences and guarded by security agents. This affected the capacity of the facility to reach out to isolated communities, as well as to be accepted and build trust in the local context. In total, the 100-beds field hospital admitted 33 Ebola patients over three and half months, of which 18 died. Of course, the epidemiology, much less dramatic than forecasted, is a key explanatory factor to the field hospital’s results. I suggest however that the very nature of the operation and the inclusion of security objectives made it heavy-handed, more secure for the volunteers but less effective and more expensive.

The increasing use of security arguments to legitimize humanitarian operations raises also ethical questions. Should aid serve purposes other than ‘doing good’? Can it lead to shift the development agenda towards issues with a lesser impact on the most vulnerable, but having the potential to affect our security? Is the growing involvement of the military in humanitarian responses a positive development?

Finally, if a security framing helps mobilizing more resources to respond to crises, is it effective in the long term? Save the Children recalled that all the money spent internationally to fight the Ebola epidemic during one year could have financed three years of universal health coverage in Guinea, Sierra Leone and Liberia and considerably improve people’s lives (2).