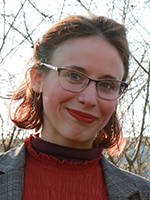 I inspect the intersection of genres "autobiography and ecocriticism", asking whether it is possible to narrate our identity in the Anthropocene. I argue for a "narrative self" which stands outside of the binary of linguistic constructivism and essentialism, remaining critical to the Anthropocene as a concept.

My research combines methods and approaches of literature studies and environmental ethics. I look at why and how we fail to connect to the problems of climate change doing a close reading of several first-person autobiographical eco-narratives. Throughout the close analyses of the texts, I look at our positionality in the Anthropocene, both individual and collective. Can we narrate our identity in the Anthropocene? Is there a “usable” way to do so? Is it possible to remain an accountable individual in the totalizing and flattening ontology the Anthropocene-concept itself stems from?

The intersection of autobiography and ecocriticism is a space where a very personal and anthropomorphic mode of storytelling may help us connect to, or bring home, issues that are otherwise out of reach, out of sight, or simply difficult to relate to because of being too “big” and abstract. However, what happens to such stories when met by post-humanist criticism?

In my analysis, I argue that certain post-humanist readings of such first-person autobiographical eco-narratives obscure and confuse the climate discourse by downplaying individual agency. I argue, that in the process of de-anthropocentrizing the climate discourse for what is seemingly the benefit of the non-human, we are bound to lose the “Anthropos” instead of the intended “centrism”, which unfortunately further plays into the polarizations and neo-colonial nature of “(anthropo-)centrism” itself.

Presenting an alternative, I work with a "narrative self" that challenges the established binaries of western metaphysics. Life-writing, which acknowledges both the self and “the self’s place,” may help us re-write our story out of the continuously enlightenment-stricken, neoliberal and capitalist “centrisms” and “dualities”, without instrumentalizing or essentializing the non-human realm. The concept of a first-person's narrative (hi)story connects to that of an embodied ecological self. It creates continuities while preserving particularities vis-a-vis more-than-a-linguistic dialogue, traversing and trespassing the inter-subjectivity and subjectivity anew.

If having a narrative identity in the Anthropocene, then we must claim what it is to be human in the first place; empowering pluralities and subjectivities of different modes of storytelling. This means not forgetting particularities of human and non-human inter-relations, their agents.