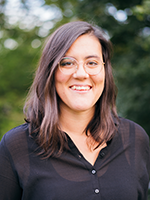 Currently writing about the implementation of increased demands for "user involvement" in scientific research, particularly in the climate field, as an expression of an ongoing science policy shift which can currently be described under the headline "open science." Interested in examining the cultural cartographies of science and narratives that underlie this policy shift and their relation to actual changes being implemented in the Norwegian research system by actors like the Research Council of Norway.

In 2019, Iris finished an MPhil at SUM titled With and for Society? Experiences from CICERO Center for International Climate Research with User Involvement in Science. The thesis examines the effects of increased demands for user involvement as an expression of an ongoing science policy shift which emphasises the inclusion of non-academic stakeholders in decision making about and processes of scientific research.

From 2013 to 2017, Iris lived in Nepal, primarily working at the intergovernmental research institution International Centre for Integrated Mountain Development (ICIMOD) as Programme Officer for a large interdisciplinary research project on climate change adaptation in the Hindu Kush Himalayan region (specifically China, India, Pakistan and Nepal). Her role included coordinating the synthesis of research results from different disciplines in order to produce policy briefs and other materials intended to communicate the results to relevant "users" in and outside the region, as well as meeting with policymakers and other officials from the four countries in order to communicate research results. It was through this work that Iris became interested in the boundaries and interactions between science and policy in the climate field.

Iris has a bachelor's degree in Anthropology and Sociology from Durham University in England, and wrote a bachelor's dissertation in social anthropology based on ethnographic research in Kanungu, Uganda titled "History repeats itself": Agricultural development and modernisation discourse in southwest Uganda. The dissertation discussed how different discourses of modernity and modernisation impact the development of Ugandan agricultural development policy as well as its reception by smallholder farmers in Kanungu.

You are now looking at a test version of the publications list where we fetch our data from Cristin in a different way (new API).
We would appreciate your feedback on any flaws or defects that you may experience with the list. Read more about changes in the beta version of publications lists.

Give us your feedback
Back to regular publications list